Home Arseblog, the arsenal blog Bukayo is back! 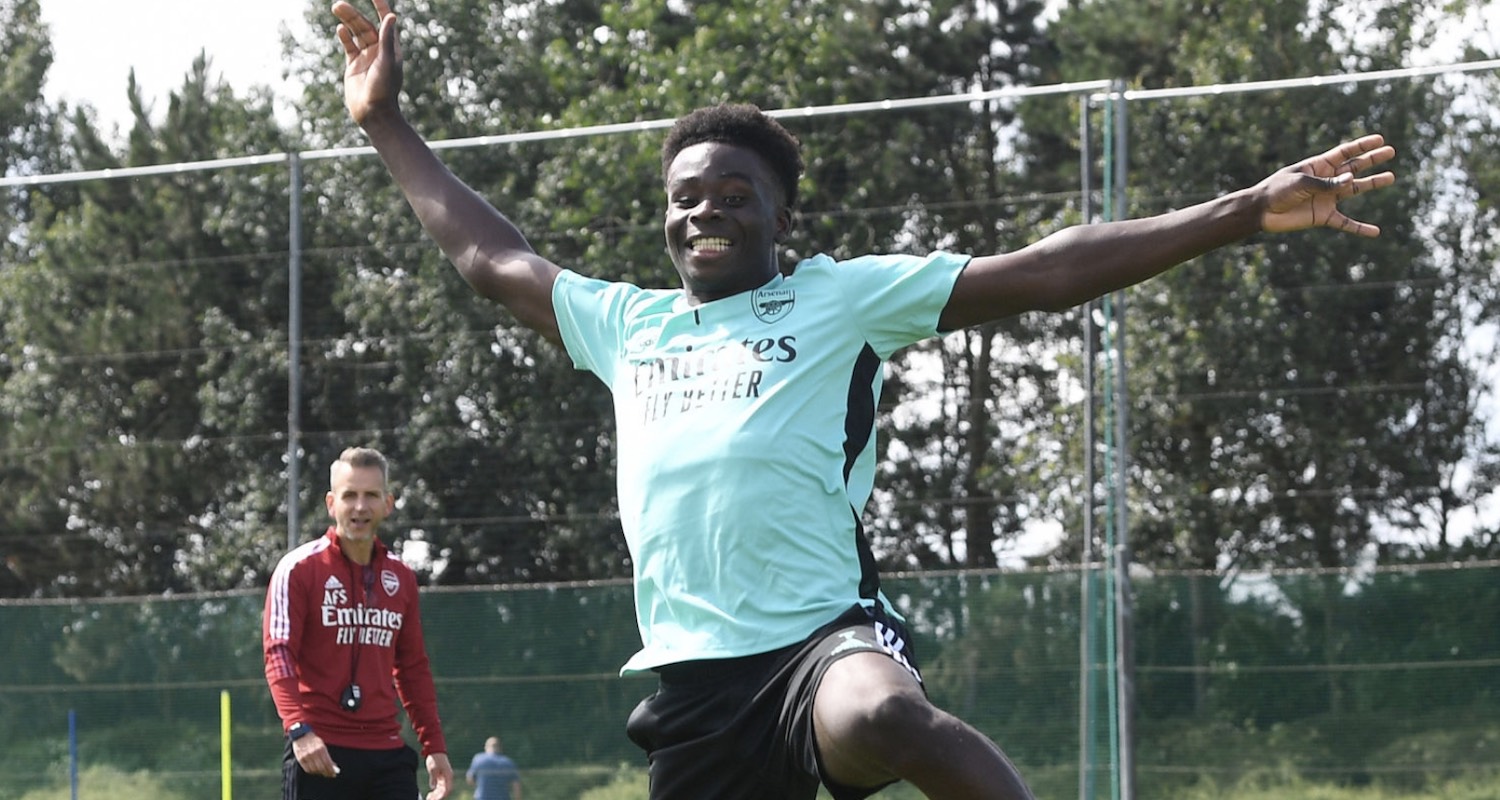 Bukayo Saka is back!

His return to the training ground yesterday was accompanied by some lovely footage of him reading the hundreds/thousands messages of support he received following the European Championships.

There isn’t always a lot of what you’d call genuinely wholesome content on football Internet – at least it doesn’t feel like that at the moment – but this would have touched even the hardest hearts. Well, perhaps not them, but most people, for sure.

Starboy Saka is back. pic.twitter.com/WZcYMlFkQ1

He was straight back into training too, and I am genuinely curious to see what the plan for Saka is next season. I know he played a lot on the right last season, but to me it feels like a waste of talent/resources to think about that position being an either/or between him and Nicolas Pepe. We don’t have enough goals in this team as it is, these two give you real threat, and the challenge for Mikel Arteta is to get them both in the same team at the same time.

I think there’s something very exciting about the idea of a Saka/Kieran Tierney partnership down the left hand side. We’ve seen Saka play there before and produce (especially creatively), and as a left footed player who is comfortable cutting onto his right I think he’s got sufficient variety to his game to give us threat inside and outside – perhaps while Tierney overlaps in the more traditional sense.

Also, and I know I’ve said this before, I think Saka has the quality to play more centrally and it wouldn’t surprise me one bit if that’s where he ended up in the longer term. It would obviously depend on how our midfield was set up, but there’s no doubt in my mind he could contribute from almost anywhere on the pitch, he’s that good. He might need to, as well, given our continued but as yet incomplete pursuit of another attacking midfielder.

Anyway, it’s good to have him back, and let’s see what happens in terms of his involvement. I have to think Sunday’s game against Sp*rs is a bit too soon. Ben White came in after his holiday and played two days after signing, so there is some precedent, but Bukayo played quite a bit for England during the Euros, so it’s a bit different. All going well though, he could potentially make the bench, at least, for the Brentford game.

I’m sure whatever decision they make about his involvement will be an informed one, based on the physical tests they put him through when he came back, and how he’s feeling himself. After what happened with England, he may want to just get going again as soon as possible. It’s important we don’t push him too hard, too soon though.

Speaking of the attacking midfield signing, there’s a lot of talk about James Maddison and reports of player + cash bids to Leicester. I don’t know, I just think there’s something iffy about all this. I still think our preferred target – by some distance too – is Martin Odegaard, and the Maddison stuff doesn’t really sound that credible. To be honest, he’s exactly the kind of player I’d expect Sp*rs to sign when they waste the Harry Kane money.

I’ve said it before, I’d much prefer Odegaard. I don’t see Maddison as a player whose departure weakens Leicester sufficiently, nor makes us strong enough, to justify giving them £70m to spend smartly. Let’s be clear, all going well for us this season, they are a team we’re going to be fighting with to make the top six. As it stands top four is well out of our reach right now, so handing that rival a massive lump of money in this current market just doesn’t seem like clever business.

Real Madrid are in a financial position where they can’t really turn down any decent bid for almost any player, and the uncertainty around Odegaard this summer provides enough encouragement for us if we want to get this done. I have no inside info on this at all, but I suspect we’re going to play this one out towards the close of the window, hoping to get a good deal. We might, we might not, and there’s some risk with that, but that’s the way this window seems to be operating, so let’s see how it goes.

While we’re on the subject of Leicester, it was horrible to see Wesley Fofana suffer a gruesome injury in a friendly with Villarreal last night. The French defender had his fibula fractured in a disgusting challenge from Fer Nino, and to make it worse it looked premeditated. A few minutes earlier there had been a foul on Nino by the Leicester man, so it looks like he took some revenge.

Did he mean to break his leg? Only he can say, but when your blood is up and you go in the way he did, you make that a possibility. So now, Fofana will miss months, and this player gets off basically scot-free. In the wake of some disquiet from Arsenal fans over some of the challenges in our game against Chelsea, it shows that even opposition with which there’s no rivalry can be dangerous.

I don’t know what kind of mechanism the sport can introduce to deal with disciplinary issues in a friendly, but it doesn’t seem right that he can just get away without any consequences. The very least that should have happened is a red card in the game itself, but remarkably he wasn’t sent off, and even scored a goal late on.

If you’ve been reading Arseblog down the years, you’ll know the disciplinary system is a real bug-bear of mine, and how incidents which result in serious injury are not dealt with the way they should be. You get a three man ban for breaking someone’s leg, you get the same ban for tickling someone’s face because you ‘raised your hands’. It’s absurd and football’s unwillingness to address this in any meaningful way, at the same time as they focus on whether or not an armpit hair is offside or not, continues to be a problem.

Arsenal fans don’t need reminding how injuries like this can impact players. Abou Diaby and Eduardo were never the same, and even though Aaron Ramsey coped better with his injury (fractured tibia and fibula), he had ongoing injury problems which were more than likely a consequence. So, let’s hope that Fofana can come back, pick up where he left off, and enjoy a long, successful career.

Right, let’s leave it there for now. Andrew Allen will be here with tomorrow’s blog, and I’ll have a brand new Arsecast for you first thing in the morning too.