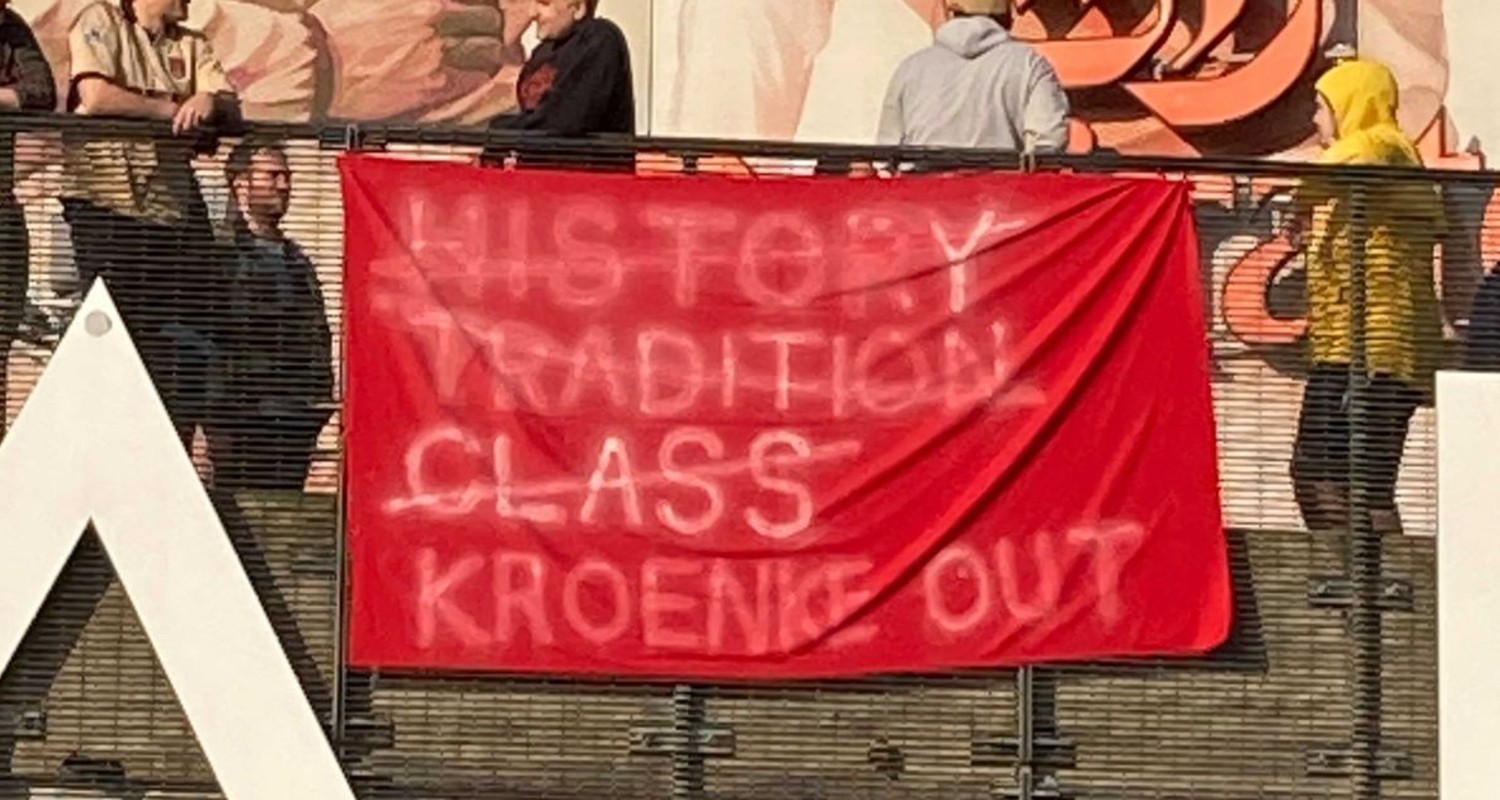 The fallout since Sunday’s announcement that 12 clubs have decided to jack in football as we know it to start their own European Super League has been remarkable.

On the one side, we’ve got 12 avaricious clubs who believe a breakaway competition will solve all of their short-term financial issues while preserving their elite status for the foreseeable future. Arsenal. Our Arsenal is one of them.

On the other? Well, it’s just about everybody else.

In the last 48 hours, all the major governing bodies have put out statements expressing varying degrees of dismay.

With the most to lose, those from UEFA, Europe’s biggest leagues and the European Club Association (ECA) are vengeful. “This idea is a spit in the face of all football lovers,” said UEFA president Aleksander Ceferin. The clubs involved have since been threatened with expulsion from domestic and existing European competitions and their players are staring down the barrel of bans from international tournaments.

Understandably, FIFPro, who represent 60,000 players, don’t much like the sound of that and have voiced concern that their members are being treated like pawns. FIFA insist they disapprove of the plans but with the finger-pointing starting in earnest they seem keen to strike a conciliatory tone.

They do so against the backdrop of a media frenzy. Italy’s Tuttosport screamed, “Are you insane?”. Their colleagues at La Gazzetta Dello Sport wrote of the “bonfire of greed” at Juventus, Inter Milan and AC Milan. In an editorial, L’Equipe labelled the Super League members “traitors” and Eurosport spoke of “the nightmare coming true”. Closer to home The Mirror branded the English contingent “disgraceful”.

Emotions are running high and in the middle of it all, supporters are trying to make sense of things.

I was so angry on Sunday night that I couldn’t sleep. I just lay in bed with a million questions going through my head. How did this happen? Have I been complicit? Why am I so shocked this has happened? Am I actually shocked this has happened? Can it be stopped? If it can’t be stopped, will I ever feel the same about Arsenal? If I don’t feel the same about the club, what the fuck am I going to do? Can I walk away? If I don’t walk away, what type of person does that make me?

If you weren’t having an existential crisis about your relationship with football in the early hours of Monday morning you didn’t miss much. When I woke up, I felt deflated and sad. There was also a huge sense of embarrassment that the club to which I pin my colours could have its name dragged through the mud by people who’ve so laughably described their ownership as a custodianship.

I have to say, I wasn’t sure that so many would share my view. Coming at this issue from different cultural, emotional and political backgrounds, club partisanship being chucked in the mix and social media doing that thing where it strips nuance from every single discussion, I feared a schism between the supporters of the clubs involved and those who are not.

It looks like those fears were misplaced. 79% of respondents to a YouGov survey conducted on Monday said they oppose the proposals for the breakaway tournament. 68% were strongly opposed, with just 14% in favour.

It seems the vast majority can smell the dirty dozen’s bullshit from a mile off.

As Stephen Fry tweeted: “6 football clubs have achieved something that no politician or public figure has managed in these times of fracture, fission & feuding. They have brought together the whole divided nation, indeed all of Europe – everyone united in disgust & revulsion at such greed and stupidity.”

When I’ve spotted people on Facebook and Twitter trying to put a positive spin on the behaviour of the breakaway clubs, their observations have often been caveated with “Perhaps I’m misunderstanding”, “I might have the wrong end of the stick” or “Maybe I’m being thick, but…”

Given the corruption scandals that have engulfed football’s governing bodies and the aggressive way broadcasters like Sky have rinsed fans for every penny in the last three decades, you can see why a belligerent faction is taking the opportunity to laugh like Nelson Muntz at the collective panic.

Believe me, the joke is ultimately on us. Look past the corporate double-speak that smoothes over the evil between the lines. The Super League isn’t about saving the game for future generations, it’s about making sure even more of the money you have in your pocket ends up in the hands of the few.

Right now, nobody knows whether the Super League clubs and their army of lawyers will pull off their coup. As better writers than me keep stressing, if the plan is to be defeated then supporters are going to have to present a united front. The breakaway clubs are relying on factions appearing and infighting to distract from any mass mobilisation against them.

While recognising it for the cynical, points-scoring political opportunism that it is, that means welcoming a UK government-led “root and branch” review of football’s finance, governance and regulation. Welcome to the party, chaps…where the fuck have you been all this time?

So where do we stand from an Arsenal point of view? Since confirming our ‘Founding Member’ status via a statement that allowed our owners to hide behind representatives of other clubs, we’ve heard absolutely nothing. The silence is deafening.

There wasn’t even a peep when news broke that we’d quit our membership of the European Club Association and that our CEO, Vinai Venkatesham, 43 days after being elected to its board, had stepped down from his position. As has been the case with other clubs, it looks as though our manager, Mikel Arteta, will have to deal with the press first.

Yesterday, Thomas Tuchel and Jurgen Klopp both claimed they had no prior knowledge of their clubs’ involvement.

“I honestly don’t know enough to judge it,” said the Chelsea manager. “I was not involved and my players were not involved in these decision makings. Maybe it’s better to step back and not to give our opinions or lose our heads about this.”

Klopp said: “People are not happy with it, I can understand it. I can’t say a lot more because we were not involved in the process – not the players, not me – we didn’t know about it. We will have to wait and see how it develops.”

It takes a brave man to speak out about his employer’s behaviour when the cameras are rolling so I’m expecting more of the same from Arteta when he holds his pre-Everton press conference on Thursday morning. A pandemic, pay cuts, Ozil; he’s coped pretty well in the past 18 months, but this is yet another huge challenge for a fledgeling manager to overcome.

Privately, he must have serious concerns about how to motivate his players in the coming days and weeks. They must be asking what they are playing for. A Europa League title that could be stripped away? A place in the Champions League that we’ve no intention of taking up? Pride in a badge that has been pissed on by the owners? Supporters, who aren’t there to cheer them on?

What a mess. What a terrible mess. We’re in for a rocky ride in the coming months.

The only thing that put a smile on my face yesterday was news that Sp*rs had sacked Jose Mourinho days before a cup final.

I’m signing off with a slow-motion wanker gesture aimed squarely at him. It’s the small things that get me out of bed.

Blogs will be back tomorrow.