It began so well.

For a team which has spent a large part of this season starting games slowly, we came out of the blocks like a 100m sprinter at Molineux last night.

0’34:  Bukayo Saka hit the post after a glorious pass from Thomas Partey dropped perfectly into the path of his clever run. Should he have scored? Probably, considering where he took the shot from, but his movement and Partey’s vision/execution were first class.

3’18: Saka tests the keeper with a low shot which Patricio gets down well to save.

8’06: Saka has the ball in the back of the net, a fizzing shot with his right foot that the keeper can’t get near. VAR, however, shows Alexandre Lacazette’s foot is offside and the goal is ruled out.

In midfield, Partey was absolutely bossing things. His range of passing, and the disguised straight line/inside ball in particular, was really impressive. Nicolas Pepe, playing from the left, forced the keeper into a good save. Saka went down in the box, despite obvious contact from the defender VAR ruled no penalty. I think it would have been soft/generous, but in the context of what was to come, it’s worth mentioning.

Pepe’s goal was genuinely excellent, the kind of strike a confident player produces, and I think what’s lost in the focus on what he does in their box is the fact he won the ball back in the first place, passing to Lacazette who gave it back to him on the left. He left Semedo on the floor eating grass, nutmegged Neves, then curled a perfect right-footed shot into the far corner of the net. His revival, if you want to call it that, has been a genuine positive in the last few games, and I think the more we get him into central positions from where he can have a sight of goal, the more effective he can be.

So, as a very good 45 minutes from an Arsenal perspective almost came to a close, there was a sting in the tail with the David Luiz red card and a penalty for Wolves. There were two minutes of added time on the board, at 46’55 Bernd Leno whacks a goal kick long, no doubt expecting the referee’s whistle to go for the break. It doesn’t. Wolves head it forward, Luiz is tight to his man high up the pitch, and I don’t think he needs to be – if I have criticism of the Brazilian for what goes down, that’s where it is.

As for what follows, I think it’s absurd. It’s not a foul. It’s not a penalty. And it’s not a red card. I know people’s opinion’s on this differ, but that’s mine. Even if you do think a striker catching the knee of the defender as he runs behind him is a foul (I don’t), and is a penalty (I don’t), to reduce a team to ten men for that is just nonsense.

If you’re a long-time reader of the blog or listener to the podcast, you will know that I am not inclined to make excuses for the stupidity of David Luiz. Nor am I someone who advocates for him to be given an extension, come the summer it’s time to wave goodbye, but in this case I think he – and we as a team – were extremely hard done by by a referee who can’t tell the difference between a corner and throw-in (see 34’07).

I also fully accept that Luiz has a history of making silly challenges, and giving away penalties, but that has no relevance to what happened last night. If his reputation was a factor, it makes it even worse, and that VAR can look at an incident like that and deem the incident worthy of the double punishment of a penalty and a red card, then it cements its status as not fit for purpose in my opinion.

The standard of officiating in the Premier League has long been an issue, and the introduction of VAR has made it worse because we can see in slow-motion replays – sometimes with handy graphics – how inconsistent the decision making is from one game to the next. 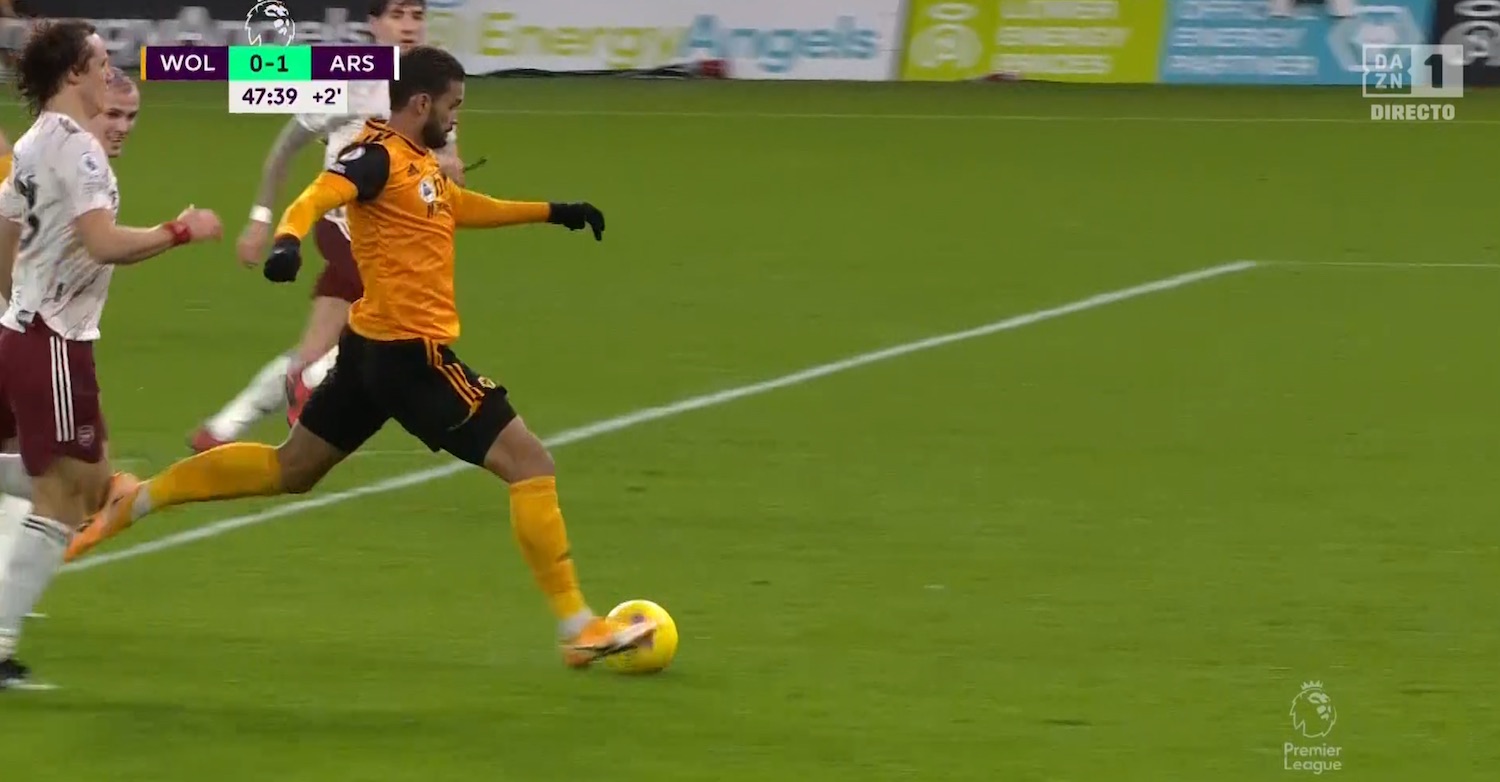 Not even a booking 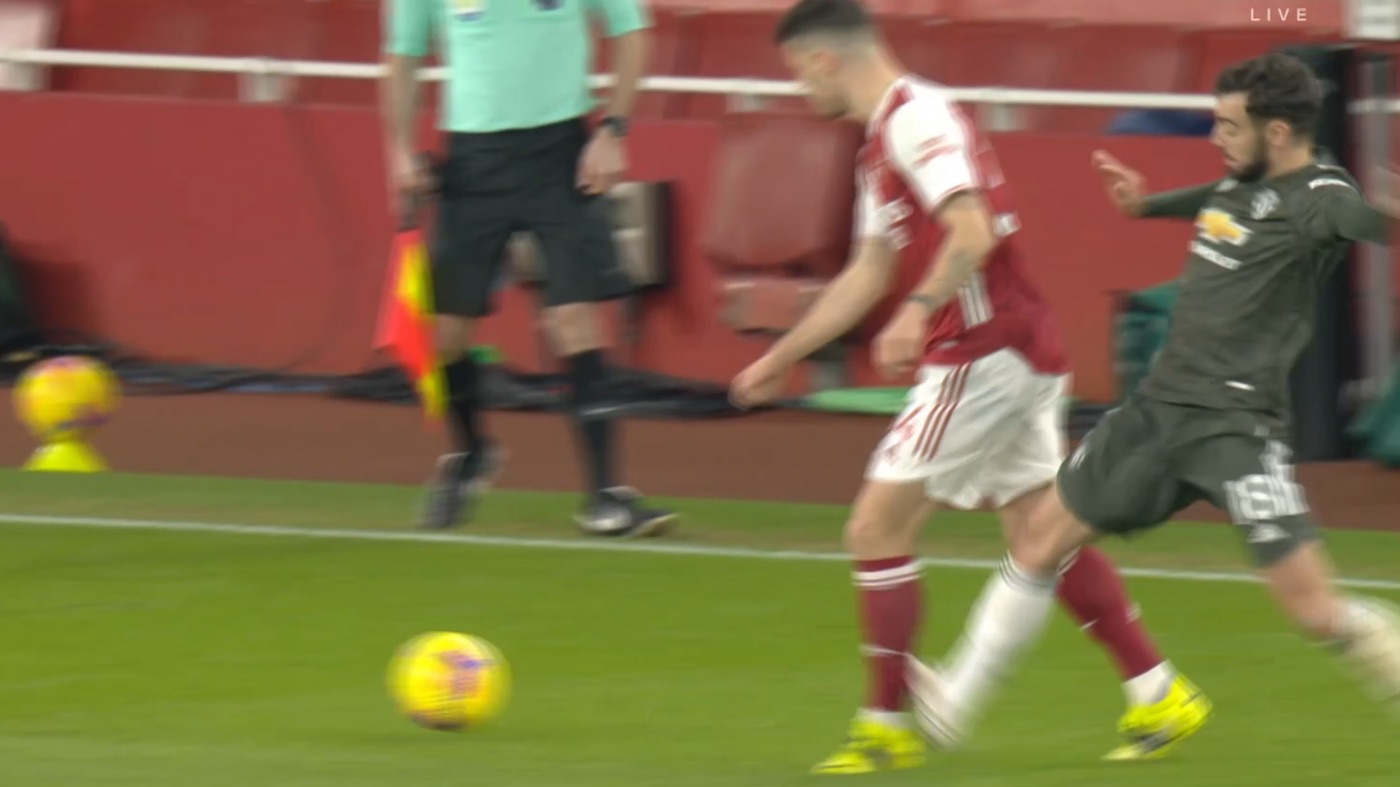 As I’ve said many times before, my barometer for incidents like this is to put myself in the shoes of the opposition. If that had been at the other end, I’d still think it was a ridiculous decision (not one I’d complain about because I’m not stupid), but to send a player off for that is 100% bullshit.

We took off an ineffective Lacazette at half-time, and I’m sure the message was keep it tight. I guess you could say there’s not a lot you can do when a player whacks one in from 30 yards the way Moutinho did, but I think we could have closed him down more quickly, and while it was very close to the post, Leno had a long time to see it and I wonder if he might have done better.

Obviously that wasn’t the moment to focus on from the keeper’s perspective. He’s won a lot of praise lately for the consistency of his performances, so quite what he was thinking when he came out and handled the ball well outside of his area I have no idea. A misjudgement, followed by a split-second moment of madness. This is not a red card we can have any complaints over, and he’ll now miss the Aston Villa game on Saturday due to suspension.

With nine men it was always going to be nigh on impossible to get something, even if Bellerin did fashion a late shooting chance for Pierre-Emerick Aubameyang. The captain’s introduction in the second was a frustration for me. It was going to be tough with ten men, but I think Pepe should have stayed on, and I’d have sacrificed Emile Smith Rowe. It’s not to say he was bad or anything, just that as we were having to sit deep, our threat was on the counter and the Ivorian offers much more of that.

So, a really frustrating result, because I think there was a lot to like about what we did in that first half. It’s the kind of football we want to see this team play, and in the cold light of day, I think that’s what we should be focusing on in the days ahead. The other stuff verged between unlucky and bizarre – when has anyone seen Leno do something as nuts as that? – and if I hope the manager and his coaching staff can use the sense of injustice the players obviously feel in the preparations for the Villa game.

It’s been a while I since I felt that affronted by a defeat, and in some ways it’s reassuringly familiar. We’ve lost games this season which we absolutely deserved to based on what we did and how we played, but I don’t feel that way this morning. We played some excellent stuff in that first half, and while we can’t ignore our part in some of what happened after that, Wolves probably couldn’t believe their luck as their win-less run came to an end. You can obviously argue we should have made more of our dominance, and that’s fair, but going in at half-time a goal up and with a full complement of players I think we’d have gone on to win that game comfortably.

There are worries for the weekend, obviously, not least Leno’s absence, but to be fair to Alex Runarsson he made a couple of good saves when he was introduced in a fairly high pressure situation. Arteta isn’t sure if Mat Ryan will be fit, so we may have to hope that Icespina can do the job against a very good Villa side. We can deal with those issues over the coming days on the blog.

The important part is to ensure we don’t get derailed by last night. We’ve made some progress in the last few weeks, and while I always thought there’d be some ups and downs, I didn’t envisage anything quite like this. Use it though, make it an us against them moment, combine it with the good football we played yesterday and in the last few weeks, and maybe we can find the silver lining in this morning’s cloud.

Pod should be out mid-morning. Until then.