Martin Ødegaard: Who is he, and what will he bring to Arsenal?

Despite the summer arrival of Thomas Partey and timely emergence of Emile Smith Rowe, Arsenal approached the January market still desperate for midfield creativity. With Covid-19 killing the market and alternative targets made unavailable – options were limited.

However, the club worked quickly to secure a short-term loan deal for Real Madrid playmaker Martin Ødegaard despite interest from Real Sociedad. So who is the Norwegian, what will he bring to Arsenal and why is he generating so much excitement?

Born in Drammen, Ødegaard began his footballing career with local side Drammen Strong where his father – Hans Erik – coached after retiring. Having impressed in various domestic and overseas competitions, word began to spread about this prodigious talent developing before Eliteserien side Strømsgodset won the race to sign him in 2009. He spent just three years in academy football before breaking into the Strømsgodset first team aged 13.

Summer trials at Bayern Munich, Manchester United and Ajax soon followed before he made Eliteserien history, becoming the youngest player (15y 111d) to make their senior topflight debut. Following lengthy speculation involving several clubs, Real Madrid secured his signature in January 2015 – paying a reported €4 million – and subsequent loans to SC Herenveen, Vitesse and more recently Real Sociedad were arranged. Having impressed for the Basque club, Los Blancos recalled him last summer only for minutes to be limited under Zinedine Zidan this season.

During his time at Real Sociedad, Imanol Alguacil deployed a 4-2-3-1 formation that allowed Ødegaard to thrive in the right half-space (zone 15). Wide players Mikel Oyarzabal and Portu were pushed forward as wingers, with the Norwegian given license to roam centrally ahead of the midfield two. He was essentially handed the creative keys which placed responsibility on his shoulders – responsibility that was duly welcomed in a towering individual campaign. 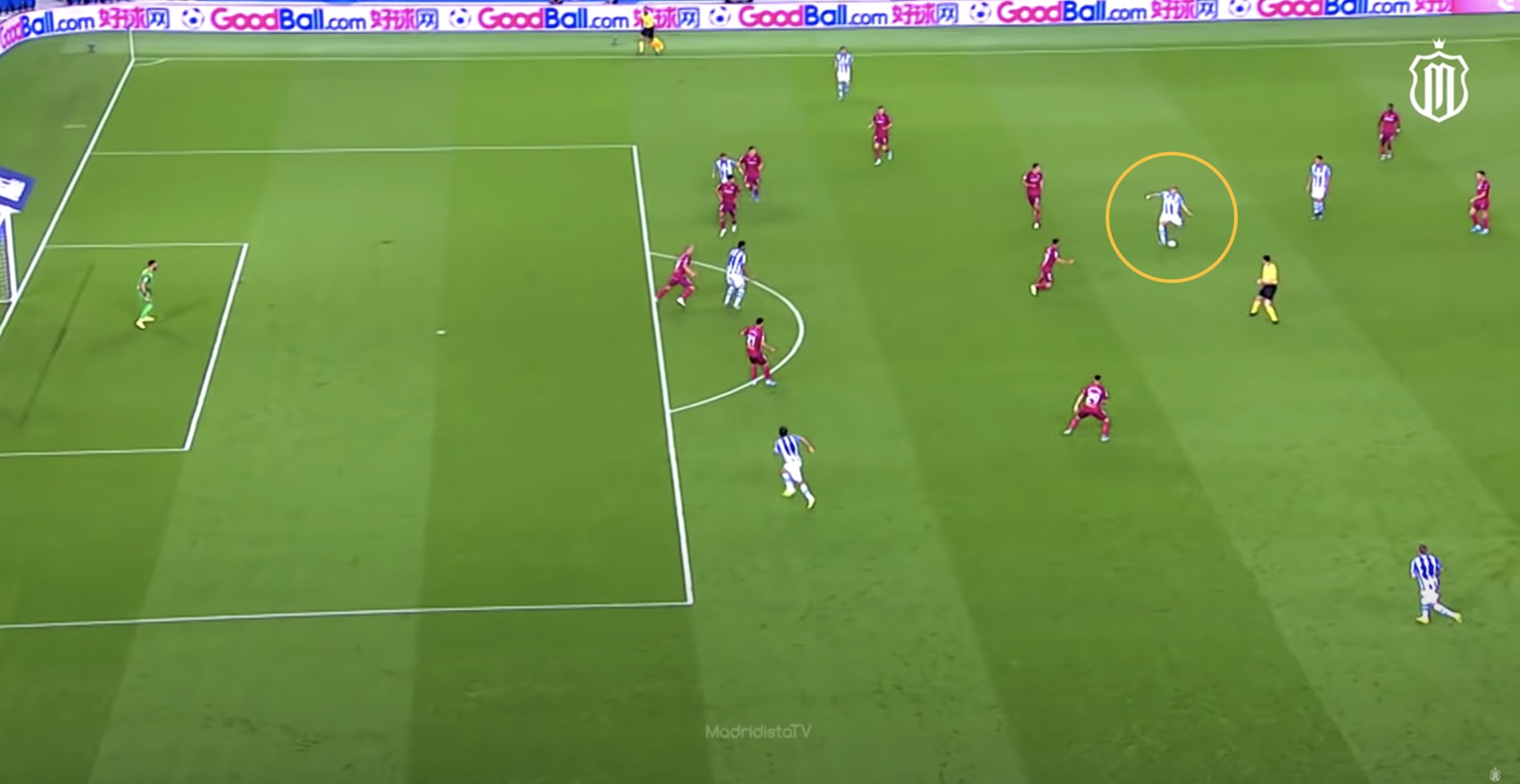 What instantly stands out whilst watching Ødegaard is the quality of his passing. During the 2019/20 season, he averaged 2.2 key passes per 90 – the third highest rate in LaLiga behind Lionel Messi and Sergio Canales. The 22-year-old also ranked second for through balls (18) and sixth for shot assists (60), positioning himself in the top five for progressive passes and passes into the penalty area. When receiving the ball, his first thought is always forward but without the constant lust for Hollywood moments. There is already clarity and maturity within his decision making.

His trademark killer passes come in two forms. One is a slide rule pass from right to left that carves open defensive structures with surgical precision. Oyarzabal and Nacho Monreal both benefited from these and Arsenal could easily replicate that success with Kieran Tierney and Pierre-Emerick Aubameyang running in behind. The other is highly technical, curled around defenders with the outside of his foot for underlapping wingers or full backs. The midfielder is tidy in possession – his 84% pass completion matches Smith Rowe – but will look to break lines when opportunities arise. 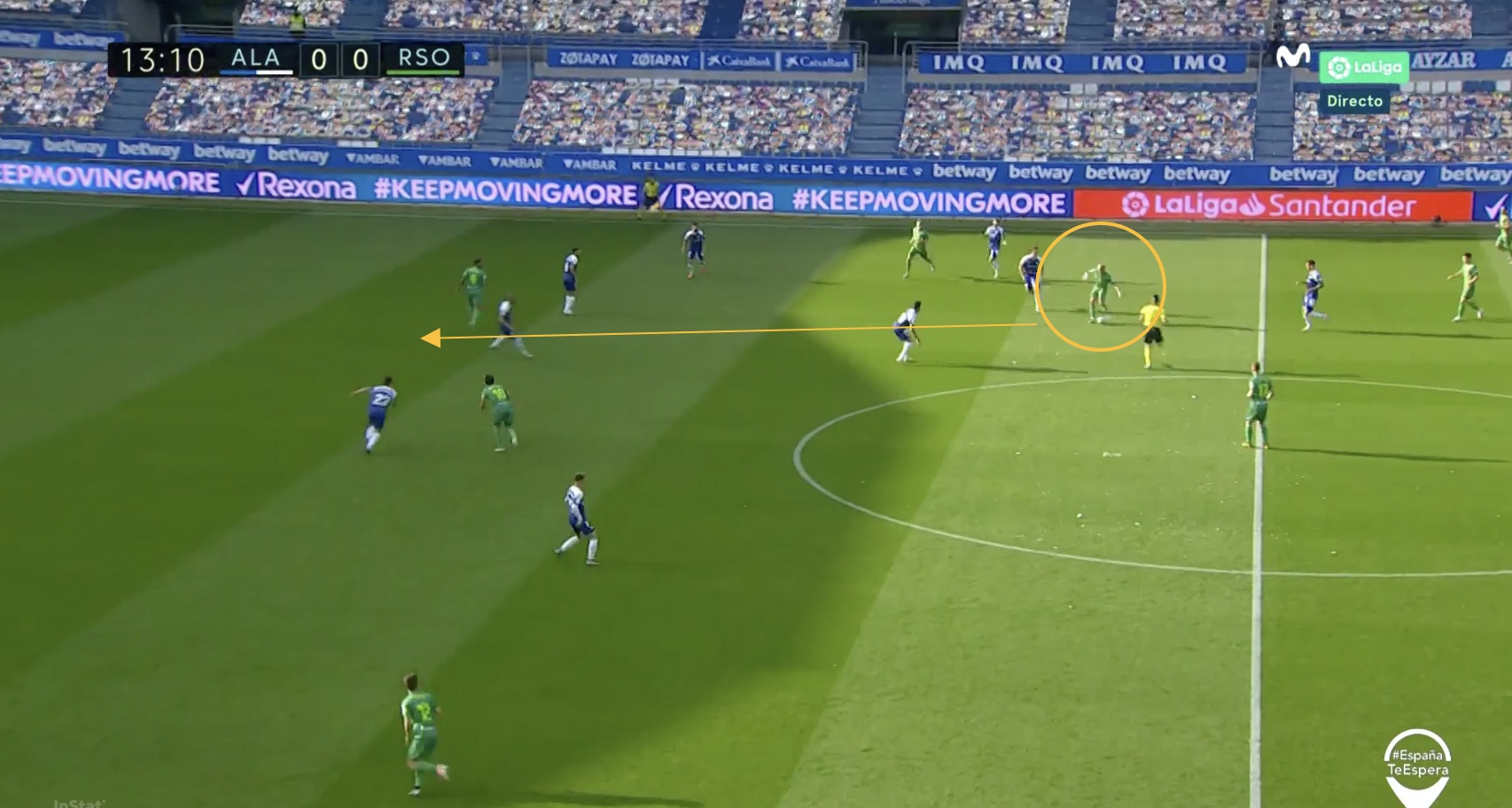 The Norwegian is also a gifted dribbler and ball carrier which instantly elevates his standing among current options at Emirates Stadium. Ødegaard averaged 2.1 dribbles per 90 last term and attempted 56 take-ons, which were completed at an 78% success rate – the sixth highest in La Liga. He has wonderful awareness to escape markers when pressed, using one touch or smart flicks to manipulate the ball into space. The playmaker is also monstrous in transition, again completing the fourth-most progressive carries in the Spanish top flight, which hints to a willingness to drop deep and drive.

Defensively, Ødegaard has declined significantly this season but this likely relates to his lack of minutes as opposed to lack of effort. His 0.1 tackles and interceptions per 90 are outliers from previous seasons – with tackles per 90 peaking at Vitesse (1.7) – behind only Partey in the current Arsenal squad. He also averaged 8.22 ball recoveries per 90 last term, which is more than any other midfielder under Mikel Arteta. 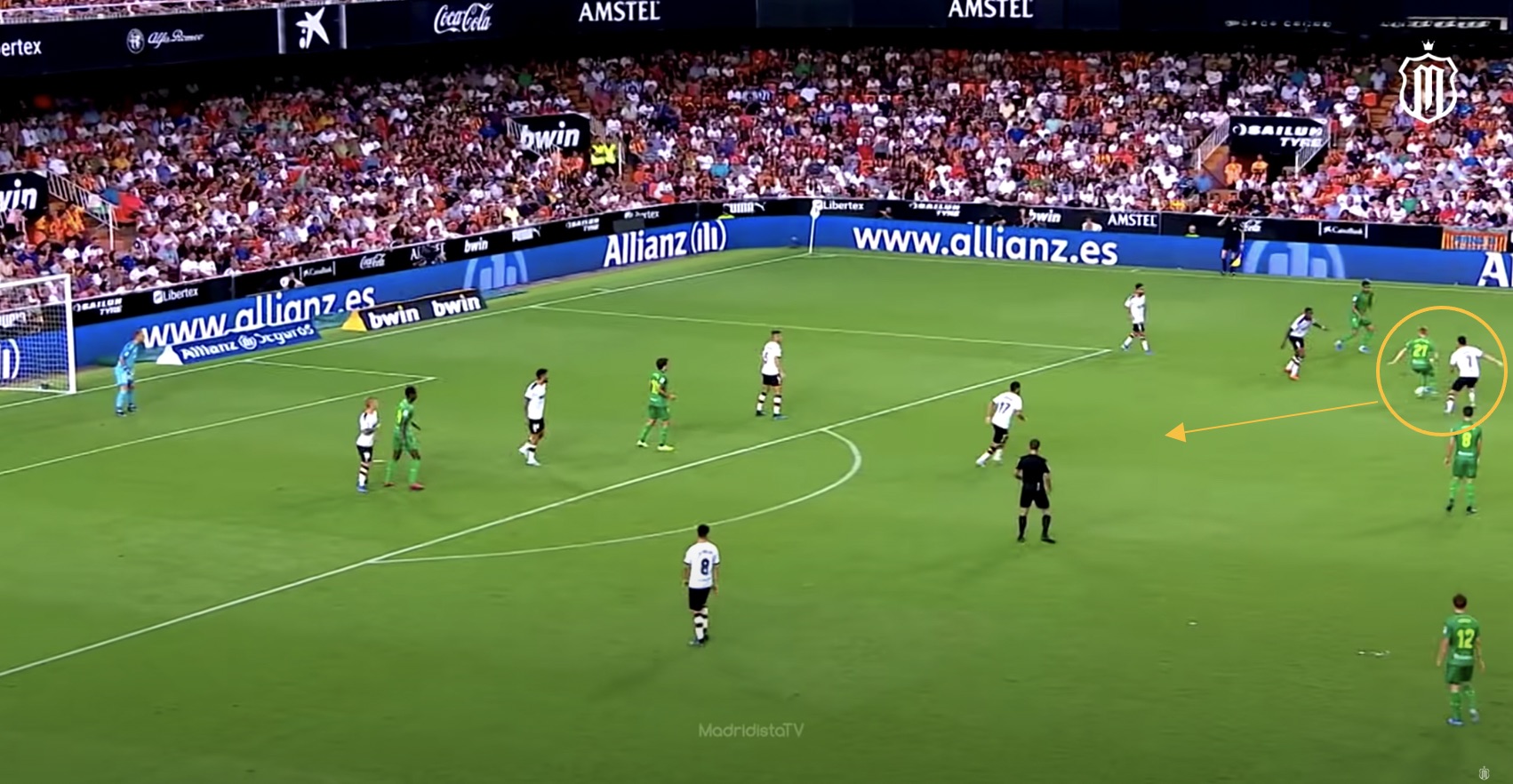 “People are surprised at his performances but we were expecting them,” said Alguacil when asked about the playmaker.

“He has eyes for the pass and then the magic feet to execute. This player belongs at a higher level, so we will enjoy him while we can.”

And enjoy him they did. The 22-year-old was one of the best players in Europe during his time with La Real, but as with every move there are caveats to consider. None of the stats presented are from this season and that cannot be ignored. His return to Real Madrid has been disappointing, with Zidane clearly not trusting him and when he was selected – they won just three games from a possible eight.

Ødegaard also suffers from tendonitis which has impacted availability, but Arsenal have experience in managing this injury with former captain Laurent Koscielny. There is also the issue of adaptation. English football has become increasingly unforgiving and favours teams who thrive in large spaces, as well as in transition. We know the 22 year old can succeed in transition but he arrives in London for the best part of five months – can he get up to speed physically and make an impact in such little time? Despite his reputation, Ødegaard has plenty to prove back in Madrid . 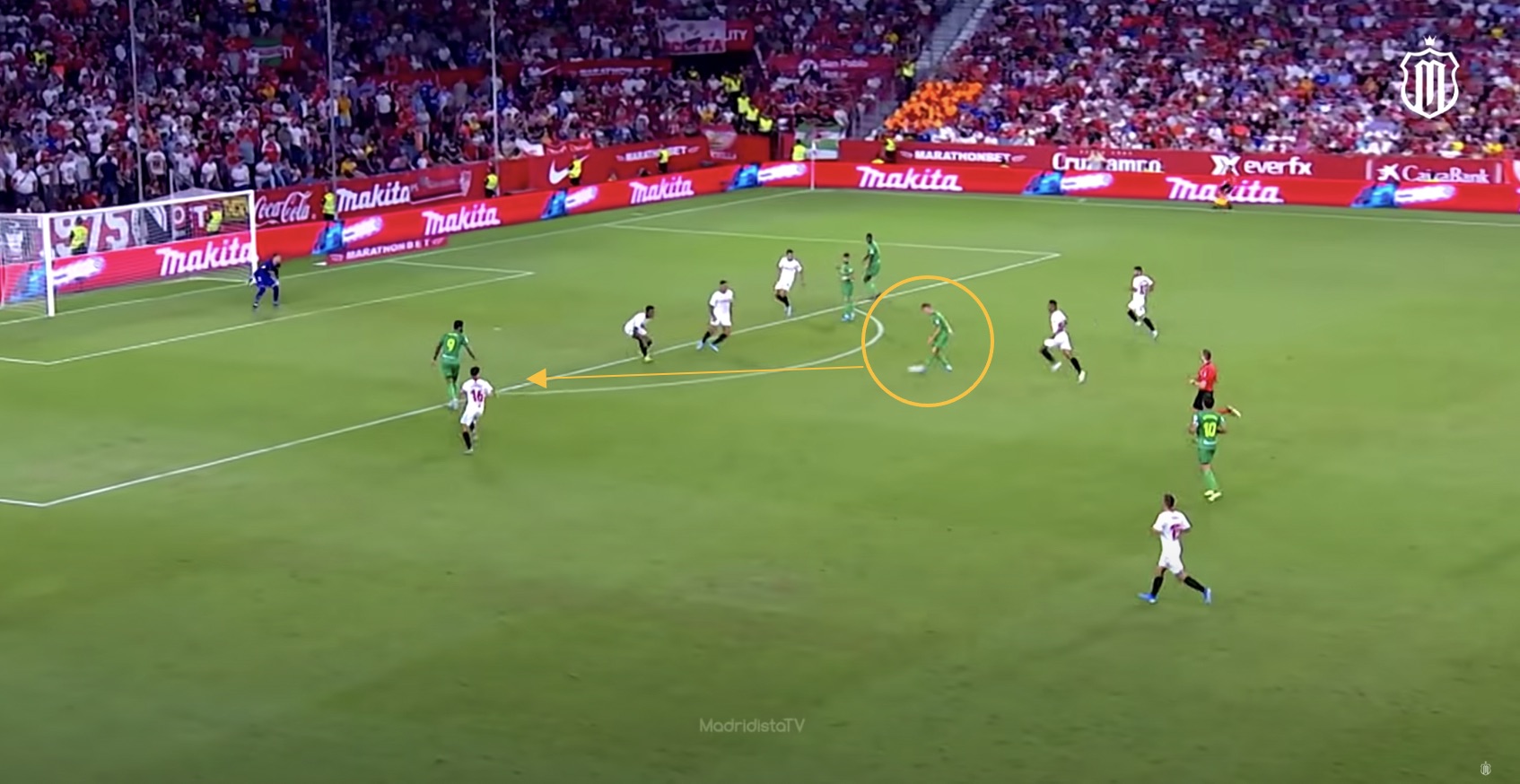 But the main takeaway is that Arsenal have sought to fix their major issue: creativity. With Mesut Özil finally confirmed as Fenerbahce royalty, the club only have Smith Rowe as their natural number ten which is not only unfair, but also irresponsible taking his injury record and fixture congestion into account. The Hale End graduate has been a welcome surprise but adding Ødegaard who can not only replace him but play alongside him as well makes total sense.

Financially the outlay is minimal at €2.5 million (loan fee and wages) with complaints over a buy-option premature. All three parties can reassess the situation in July having spent more time together, while plenty depends on the future of both Zidane and Arsenal, based on how their respective seasons finishe.

It’s low risk, high reward, which is exactly what Edu and Arteta would have wanted this month. It doesn’t work? Shake hands and send him back with no hard feelings. He hits the ground running and potential benefits are far more fruitful.

Ødegaard is one of the best young players around that needs a change of scenery to refine his art – and thankfully a blank canvas awaits him in North London.

Previous articleEpisode 613: His wrong foot
Next articleTactics Column: Arteta and Arsenal put the pressure on