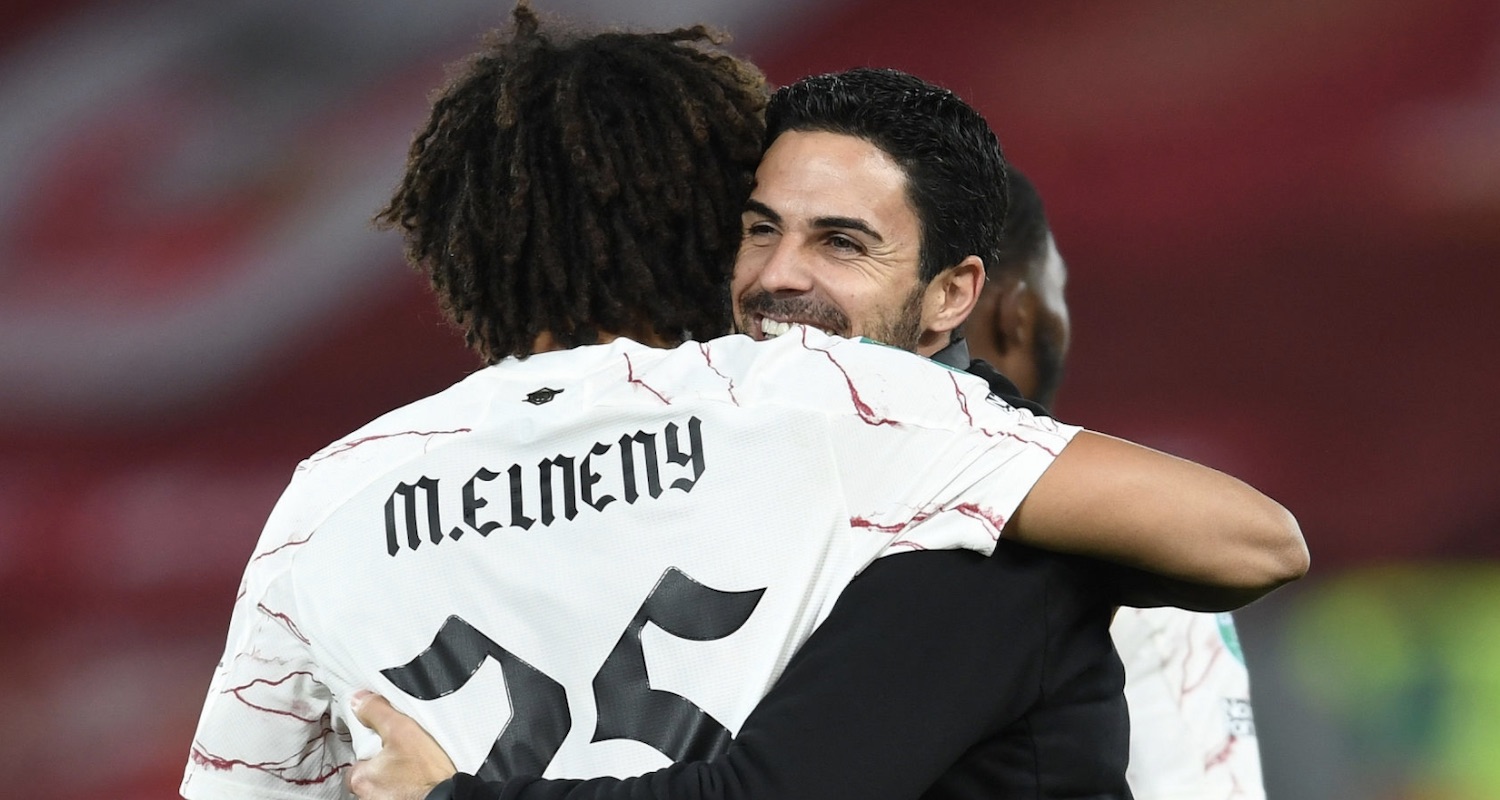 It seems that win or lose, the life cycle of games is shorter than it used to be. I have no hard evidence to back this up, it just feels like it. I don’t know why it is, because with the absence of fans and pretty much all the discourse taking place online, we should have more to talk about.

Anyway, after our first win at Old Trafford since Bukayo Saka just turned five years of age, I think we need to bask in it a little longer. Before I delve into a couple of things, let me point you in the direction of some of the stuff that has been produced here on the site beyond the blog.

1 – Lewis Ambrose (@LGAmbrose) examines the game from a tactical perspective here. How we set up, how we reacted to United change their shape, the influence of Hector Bellerin and lots more.

2 – Scott’s (@oh_that_crab) By The Numbers piece for Arseblog News is here.

Plenty to get your teeth and your eyeballs into there. Now, let’s move on and talk a bit about Mohamed Elneny, a player who I thought might struggle for playing time this season. However, when I think about the kind of player he is – obviously with the benefit of hindsight – his selection against United shouldn’t really have been a surprise. When you compare him to the other options, Dani Ceballos and Granit Xhaka, he’s more mobile, he’s got more energy, but crucially he provides a level of technical security the others don’t.

Ceballos might have a bit more creativity in him, and Xhaka’s passing range might be a bit better, but Elneny is someone who rarely loses possession. You can give it to him in tight areas and he’s not worried about it at all, whereas the other two have occasional moments where they can be caught on the ball. There are also shades of Arteta himself in the Egyptian, a solid, technically good midfielder who will give 100% every time, someone who can produce consistency. He’s generally 7 out of 10 every time, rather than 9/10 one week and 4/10 the next. There is some value in that, particularly in the structured kind of football Arteta wants to play.

It’s quite a comeback for Elneny. It’s a bit lost in the mists of time that when Unai Emery told Shkodran Mustafi to find a new challenge in the summer of 2019, he also included Elneny in that statement, saying:

I think now the best for them is to be protagonists in another team and to get another challenge for themselves. Last year with Mustafi and Mo, when they didn’t play they weren’t happy and I spoke with them a lot of times last year and this pre-season.

I think it is positive for them to leave and sign for another team where they can be protagonists and be happy and continue their careers.

Regardless of what you think of a player, being cast-aside like that in public by your manager is kind of humiliating. Mustafi didn’t go anywhere, but Elneny found a loan move to Besiktas where he did well. That same summer, Arsene Wenger spoke to beIN Sport about the midfielder, saying:

He’s a player with a modern style of play and that always gives his best for his team. Elneny is a very tactically-useful player. He is very active inside the pitch and what strikes me the most is how he protects his team.

When you consider Arteta’s post-match comments about him in that context, his selection on Sunday makes so much sense. He said:

I like players that have zero ego, who play for the team, who want to contribute regardless of what it is, whether that’s one minute or 96 minutes or just by being there and giving positive feedback all the time. He contributes to our culture.

That moment in the 92nd minute of a gruelling game when he chased down the United players to force a turnover in possession is precisely why a manager will have faith in a player like Elneny. I said this on the Arsecast Extra yesterday, but sometimes a player can raise his level to match those around him, and it was interesting – albeit perhaps a little premature to draw conclusions – that his best game in an Arsenal shirt came alongside Thomas Partey.

We’re just four appearances into his career in North London, and it’s already obvious that the former Atletico Madrid man is, in terms of sheer midfield quality, a notch above anybody we’ve had in that position since Santi Cazorla. Which isn’t to compare them as players, of course, because they’re obviously very different. However, it’s clear that he’s an upgrade on what we’ve had in recent years. A rising tide lifts all boats etc etc, so is Partey the tide and is Elneny a midfield dinghy that will benefit from that? It’s been one game, we need to see more, but it’s hard not to be encouraged by it.

A final thought: Arteta’s comments about culture and ego are interesting, because he’s someone who is putting the collective above all else. Comparisons with former managers are always a bit of a stretch, but are there shades of George Graham here? When he arrived at the club in 1986 he had no truck with big reputations or anything less than 100% commitment at all times. Some big names fell by the wayside pretty quickly, replaced by those who were willing to do what he wanted as he tried, and ultimately succeeded, in building a competitive squad.

I know times are different, the challenges are different, but it’s quite funny how football can provide these little connections to the past. Steve Bould telling Tony Adams that Arteta has ‘got it all‘, provides another little link to that era, but also some encouragement about the work Arteta is doing and what he’s trying to instill among his players. We’ve still got a long way to go, but it’s becoming clearer and clearer what he wants and what he doesn’t want, and the decisions he’s making revolve around that first and foremost.

Right, if you haven’t had a chance to listen already, the podcast is below, along with all the links you need to listen and subscribe. Enjoy, till tomorrow.