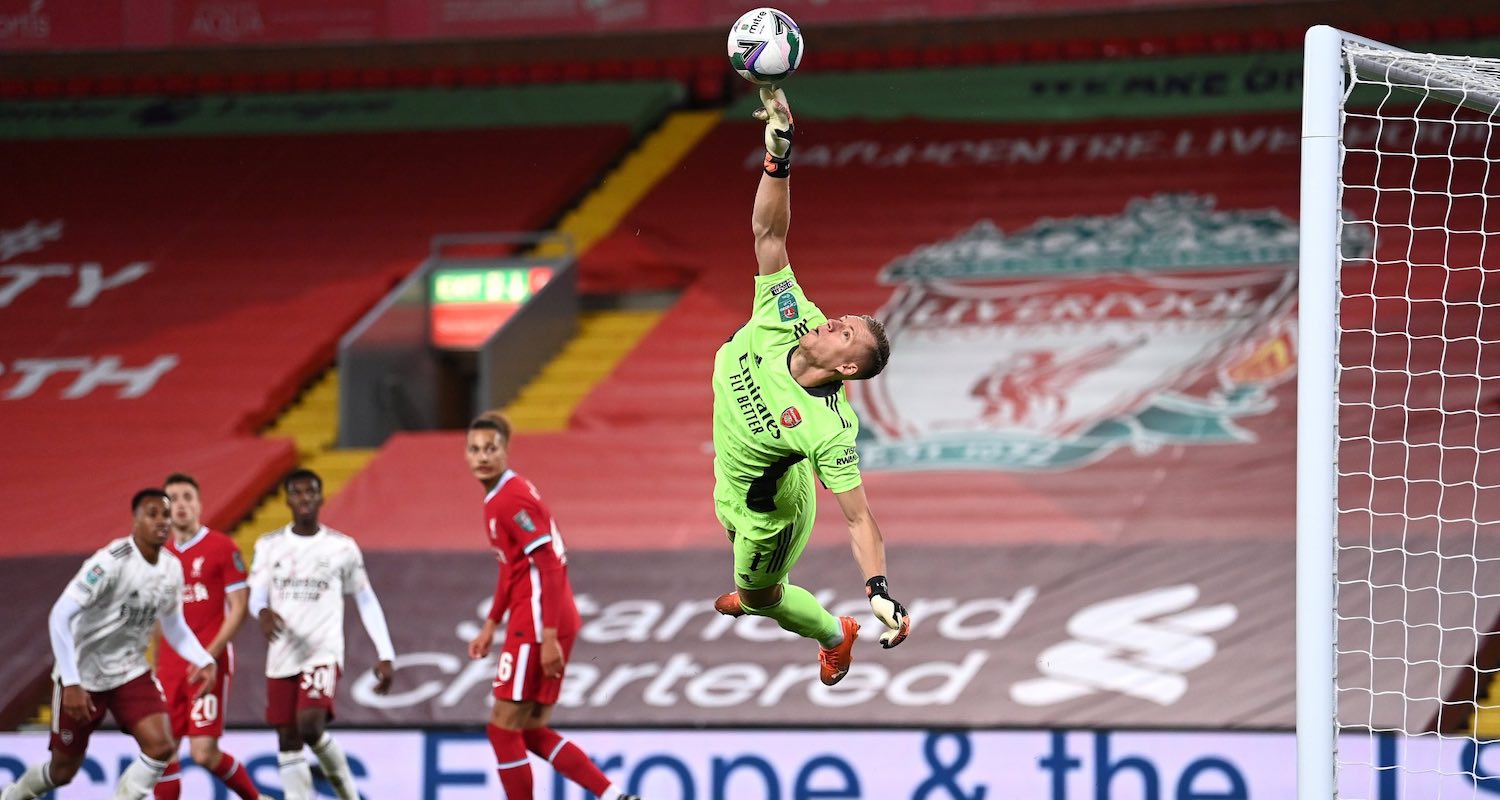 You know when people say a penalty shoot-out is a lottery? They are talking absolute horse bollix. A lottery is random. Penalties are a test of a player’s nerve and technique and character, and that includes goalkeepers too.

For the second time in little over a month, Arsenal beat Liverpool on penalties and there was nothing about it that was like a lottery. We scored more than they did, our goalkeeper saved more than theirs did, and we went through to the quarter-finals of the Carabao Cup.

I quite enjoyed this game, not because we played particularly well – we didn’t; or that I’m especially invested in this competition – I’m not; but because it’s a fixture without any great pressure. If we’d gone out, I wouldn’t feel anywhere near as bad as I would if we dropped points in the Premier League. If the shoot-out had gone the other way, I wouldn’t have liked it, but it would have been a small thing to get over.

It wasn’t a great game, there was lots of pressure from Liverpool, and that Bernd Leno was our very obvious man of the match tells you plenty. He made some superb saves throughout, and in the second half he was the difference. There was one low down from Virgin van Dijk which demonstrated his lightning reactions, and the one from a looping header that he clawed away was just brilliant.

It was a reminder from the German that he’s number one, and he said as much afterwards when asked if he feared for his position due to the great displays Emi Martinez put in after his injury at Brighton. He said:

No, I’ve never feared it. The club always gave me the feeling that I was the number one, I am the number one and I would be the number one. That was always very good from the club. My job is to prove it every week. I think I’ve done it today again.

Can’t really argue, and I while I understand every single he thing does is now viewed through the prism of ‘Emi Martinez would never …’, performances like last night will hopefully be the beginning of the end for that. I loved what Emi did, don’t get me wrong, but the decision to let him go wasn’t just based on what he did after lockdown. It was made with the benefit of 11 years of service, a player we knew very well, a former teammate of Mikel Arteta too, so the decision regarding Leno’s status as number one was made in that context (and the gigantic offer Aston Villa made for a player who would previously have commanded a small percentage of that).

Before we get to penalties, a couple of quick other observations because I don’t think anybody needs a full review of a scoreless 90 minutes. Nicolas Pepe on the left was interesting, I think it’s the first time he’s started there since he arrived. I don’t think he was great, by any means, and it’s hard not to worry a little about him. He seems like such a confidence player, and right now that’s in short supply. You look at a game like this one and hope he can do something to ignite the talent, to provide him with the spark he needs but it wasn’t forthcoming.

Then you wonder if it’s all a bit circular. He’s low on confidence because despite playing really well towards the end of last season he’s lost his place to Willian. If Willian was tearing it up, you could compartmentalise it more easily, but aside from a very good performance against Fulham he’s been very average. The fact that Pepe and Willian are two very different players in terms of style and that the latter seems to fit what Arteta wants on the right could also be construed as a bit of a concern. What I would say is this: it’s a long season, we often look for definitive answers right away for questions which will only be answered over time. There’s a lot of football to play, a long season ahead, and Pepe could become a very important piece of the puzzle, but there’s no question there’s some genuine pressure on him now.

I also liked Gabriel who got some more minutes under his belt, and that will be important. There was no William Saliba, and Arteta’s post game comments seem to make it clear that the young Frenchman isn’t considered ready yet – not even for a place on the bench. This feels like a big issue on the basis of his £28m fee, but not when you think about the fact he’s a very raw 19 year old centre-half arriving at Arsenal after an injury hit season. How many central defenders of that age are ready for the cut and thrust of English football? Look at this one on the basis of who he is, not how much he cost.

I’ve said before I think expectations of Saliba were absolutely off the charts, as if he were some magic fix-all for a defence which has been in dire need of repairs. But, when you look back at what Arteta has said about that, about how he will be important but needs time, it was no surprise at all he wasn’t involved last night. It does sound a bit like we might be open to loaning him out again, and if that is the best decision to ensure he has a solid foundation to make a great career at Arsenal, then so be it.

Right, the penalties. Leno we’ve touched on, but it’s worth highlighting again he saved two. I realise there’s a balance issue between a good save and a poor penalty, and I think – like Elneny’s – it tipped towards the latter rather than the former, but as a keeper you can only do what you need to do, and he did it. Joe Willock’s winner was not a good penalty, but Adrian still failed to keep it out, so credit to Leno.

How can you not love Ainsley Maitland-Niles though? He sauntered up to take his, singing away to himself like a man out for a walk in the park with his beloved dog, and his approach and execution looked casual but were absolutely clinical in the end. Not for the first time either.

I told him in the dressing room that I’m going to have a heart attack because with his body language… Jesus Christ! He puts it in the net which is the reason why he was one of the subs.

No doubt somebody will create a montage of his penalties, set to a sexy, slow-funk soundtrack, and we can all enjoy what he does from the spot. His turn and laugh at the Liverpool keeper afterwards just put the icing on the cake. At a time when we get so deep on every aspect of every game and every performance, to have someone just step up and do that is glorious.

The reward for our win is a quarter-final, at home, against Man City. That takes place some time in December.

Right, that’s it for this morning. James and I will be recording an Arsecast Extra for you this morning. As ever if you have questions or topics for discussion, send to @gunnerblog and @arseblog on Twitter with the hashtag #arsecastextra – or if you’re on Arseblog Member on Patreon, leave your question in the #arsecast-extra-questions channel on our Discord server.

The podcast should be out mid-morning, so keep your eyes peeled in all the usual places for when it drops. Until then, take it easy.