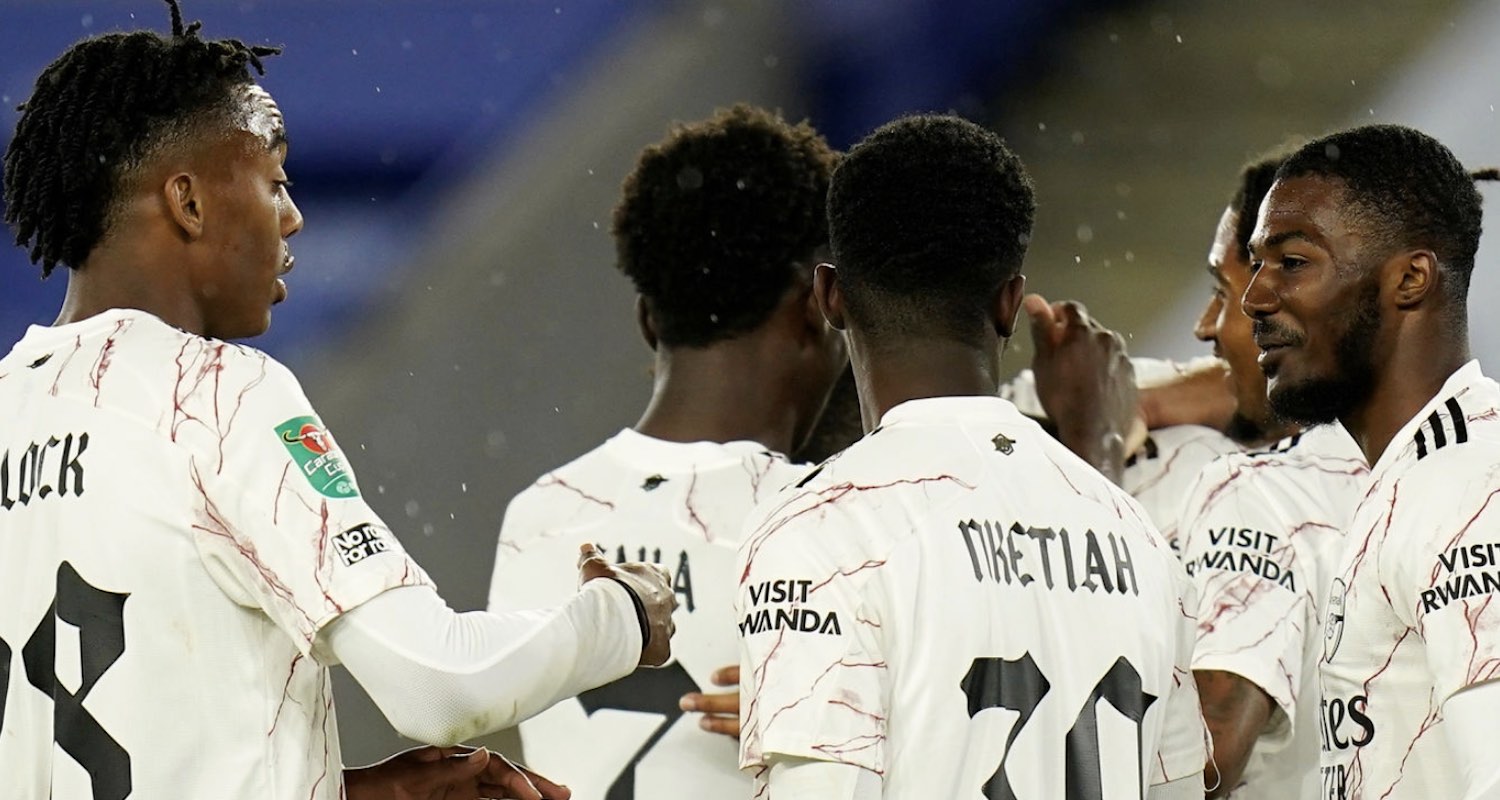 Arsenal are through to the 4th round of the Carabao Cup thanks to a 2-0 win over Leicester last night. Football writing sentences don’t get much more exciting than that, let me tell you.

What can we say? Well, the team was pretty experienced all things considered, with the likes of Bernd Leno, David Luiz, Mohamed Elneny, and Nicolas Pepe all starting. We also had five Hale End Academy graduates on the pitch from the start in the shape of Ainsley Maitland-Niles, Bukayo Saka, Joe Willock, Reiss Nelson and Eddie Nketiah – and for me these guys were the story of the game.

Early on Nelson almost scored with a lovely curling effort which the keeper tipped over, while at the other end Leno had to make an excellent save after Iheanacho was sent in behind our defence rather a bit too easily. That’s twice in the opening three games of this season that the German has been called into action early on to make an important stop, to prevent the complexion of the game changing in favour of the opposition.

Nelson was lively, but Saka even more so. He has this ability to kind of spark into life, more noticeable in encounters like last night when the overall quality of the game isn’t particularly great, and he should have had a penalty when he was obviously bundled over in the box. The referee thought otherwise, there’s no VAR in this competition (until the later stages maybe?), and play went on, but it demonstrated the danger the 19 year old can cause.

We took the lead in the second half, Nicolas Pepe driving into the box, and trying to square for Nketiah. The first attempt was blocked, his second hit the post, rebounded out, hit Christian Fuchs and went in. As scrappy an own goal as you’ll ever see really, but they all count. I’ve seen people talking about Nketiah’s reaction – critical of him because after the ball has gone in, he’s making an exasperated ‘I wanted it to feet!’ gesture at Pepe, rather than celebrating the goal.

I think Pepe did try with the first ball to find him, and I don’t think it was easy for him either because there were a clutch of Leicester defenders in the way. As for not celebrating or being annoyed, I don’t think there’s any reason to be worried or upset by it. He’s just desperate to score goals, it’s not at all uncommon for players to not react when their team scores – I feel like they sometimes view a goal as less of a thing to celebrate than we do as fans. It’s just a part of the job, something they’re trying to do all game, and if you watch the replays he, Maitland-Niles and Pepe end up laughing at it. Storm in a teacup stuff really.

Eddie was unlucky not to score with a nice lob which Wes Morgan cleared off the line, and to be fair we got away with one in our own box late on when Ayoze Perez got away from Kolasinac too easily, heading wide from a free kick when he really should have hit the target. But, Nketiah wasn’t to be denied, securing the game in the 90th minute with the kind of finish the game deserved. Substitute Hector Bellerin made the goal, bursting into the box and beyond Leicester’s defenders to square it for the striker. The ball got there despite some Leicester interference, the goalkeeper was hilariously static, and as he fell over a defender, Eddie stuck out a leg to poke it home and make it 2-0. He celebrated that one ?.

In the end, a fairly dull evening – it’s games like this one where the absence of supporters in stadiums really does have an impact. There’s just enough glitz and glamour to Premier League fixtures in general to make it bearable, but a cup tie like this feels like nothing more than a training game with the backdrop of solitary shouts from players and managers, and the still too treble-y thwack of the ball as it’s being kicked (add some bass to those mics, sound guys!). The reward for victory is a 4th round tie against the mighty Lincoln City or plucky underdogs Liverpool who play later tonight.

Afterwards, Mikel Arteta was asked more about players who weren’t there than the ones who had won a game and kept a clean sheet. In particular, Mesut Ozil who didn’t even make the squad. Nor did Matteo Guendouzi or Lucas Torreira, the latter linked strongly with a move to Atletico Madrid so potentially not risked because of that. The manager’s answer to the first question about Ozil’s absence was quite telling:

I am really happy with the performance of the players here, how difficult they are making things for the coaching staff to select the squad.

You can read the transcript of the press conference here, and when asked if he could understand why there were so many questions about the club’s highest earner, he said:

Of course I understand, I respect your questions but I have to try to do my job as fair as possible and pick the players that, in my opinion, are in a better condition to play.

What now? I don’t know. Genuinely. If Ozil can’t make the squad for Carabao Cup game like this, then when he is he going to be picked? He hasn’t played a single minute since March, and it doesn’t look like it’s going to happen any time soon. Maybe – and I realise this is pure speculation – there’s something going on with him like there is with Torreira, that Arsenal are trying to facilitate a move somewhere, and don’t want to risk a player who has had issues with a delicate back for a long time. I mean, I wouldn’t bet any money on that: it’s not 100% implausible, but it’s 99% unlikely.

Will this issue come up again? Unquestionably. Do Arsenal need to find a solution? Of course. But if a manager doesn’t want to pick a player but the player absolutely doesn’t want to leave then what you have is stalemate. Very, very expensive stalemate in the case of Ozil, and this could well be a situation that is only resolved next June when his contract expires.

Right, that’s it for this morning. I’ll be back with more here tomorrow, including a brand new Arsecast. Until then.