Arsenal’s slim hopes of European qualification via the Premier League ended last night with a 1-0 defeat to Aston Villa, in a game which told us precisely nothing we didn’t already know.

Mikel Arteta made changes, as you would expect, with Cedric, Rob Holding, Sead Kolasinac, Bukayo Saka, Lucas Torreira and Eddie Nketiah all coming into the team to provide some fresh legs. Unfortunately, there’s a big difference between freshness and quality, and this was a performance which hammered home a number of issues we’ve seen manifest themselves throughout the season.

After the North London derby, our Opta friend @Orbinho Tweeted this:

I’m not going to try work out the maths after last night, but those defensive chickens came home to roost again last night. We gave away a corner, Villa took it, almost all our players were drawn to the near post which allowed an unmarked Trezeguet to finish smartly at the back post. Cedric was marking someone, at least, but it’s never great to see a defender turn his back on a shot – particularly after we’d beaten City in our last game in no small part because of our defensive commitment and willingness to get bodies in the way. The captain got bamboozled by a Tyrone Mings one-liner. None of it was good.

Still, that was a small part of the problem. The wider one is systematic, fundamental, and you can be quite sure that ahead of the FA Cup final, with some of the players they have, Chelsea will be looking to try and exploit what is a significant weakness in this team.

It’s easy to imagine Mikel Arteta sitting at home like a Lego-haired Richard III lamenting the fact he doesn’t have a horse and would give up his kingdom for one. But instead of a horse, it’s a creative midfield player … or two.

Arsenal had plenty of possession, 69% to Villa’s 31%, but lacked the ability to open up the opposition. Of course it’s difficult when a team is sitting deep, but that’s the challenge you’re going to face in games like this. Also, it’s exactly what we did to Man City in the previous game, soaked it up, hit them when we could, and dug in defensively. This isn’t something we ought to be unaware of. It’s just when the shoe is on the other foot, it doesn’t really fit.

34 crosses, 117 passes in the attacking third, but few chances created. Granit Xhaka came on at half-time for Torreira, a move which gave us more control in midfield, but what Arsenal needed wasn’t a player who could keep the ball circulating so we could fire in crosses that were meat and drink for the Villa defence, but someone to provide some incisiveness. The pass graphic speaks volumes, the Arsenal horseshoe in full effect last night: 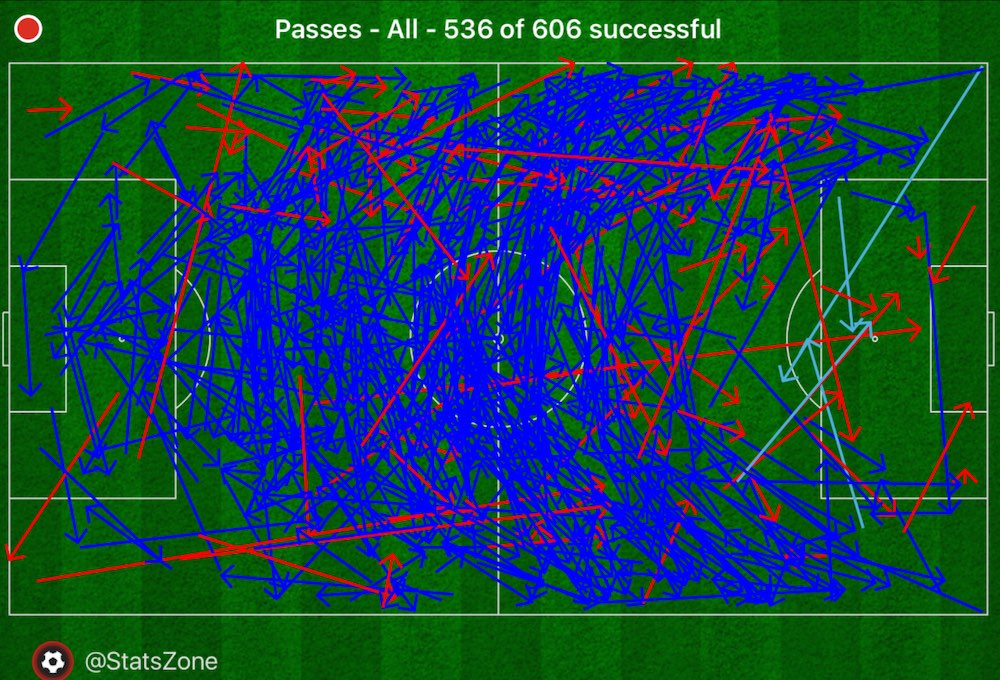 Dani Ceballos was one of the few to come out of last night’s game with any credit in the bank, he always plays with a drive and energy that’s admirable, but from nearly 100 passes he made just one chance. Which isn’t to be critical of him, by the way, I don’t think he was helped by a forward line which wasn’t balanced and which frankly lacked the same kind of endeavour he showed, but it shows that this is a job that requires more than one man in games such as this.

There’s a circular argument too, that the forwards looked bad because they lacked service – which is certainly true to an extent – but this is a big problem for us and one which is going to have to be addressed in the market when it opens. I should also point out that the ability to create doesn’t simply come from players who can pass the ball forwards, but also players who can carry the ball and are willing to run at the opposition. Perhaps he’s not everyone’s cup of tea, but think what someone like Jack Grealish would add to this team based on what you’ve seen last night.

Inevitably, there were discussions on social media last night about Mesut Ozil and what he could potentially offer in that regard. Without wanting to open up that can of worms again, I’ll just say this: Arteta knows his team is desperate for more craft and vision, he knows Ozil as well as anyone having played alongside him for years, yet even with that pressing need and full knowledge of his talent, he’s still not even in the squad. It suggests a serious issue, not a back one by the way, and I really don’t think our answer to this problem is to look backwards at what we used to have. We need to look forward and find a new solution.

After the goal we needed to find ways to attack them better in the final third and we lacked that creativity and that final cross and spark.

Of course there are ways you can get more out of what you have, but you can work as hard as you like and you won’t make a competitive basketball team from a group of lads who are all 5’7. There are things that are simply missing from the team to address that issue of creativity, and there’s always going to be a limit to what you can do without adding those qualities.

A plane flew over Villa Park last night with a banner that said ‘Back Arteta, Kroenke out’. I’m no fan of KSE but the messaging is a bit confused. You want the owners to back the manager but also sack themselves? The first part of that banner would have been more than sufficient.

Arteta was asked afterwards if he felt his comments after the Liverpool game about needing to improve might have made fans think there was a rift between him and the owners/executives. He said:

I don’t know but if that’s the impression then it’s not what I wanted to do. I wanted to emphasise – and I’ll do it again – that we need to improve in many areas. The first of all is my responsibility, to improve the team and everything with the mentality of course as well. After that, we have certain areas that we need to get better. The top teams in certain areas are better than us and we have to do that.

The good results against Liverpool and Man City were thoroughly enjoyable, but for all the positivity they engendered, surely nobody thought they were a panacea for all our problems. As Arteta himself said afterwards, ‘The league table doesn’t lie … it is not good enough for this football club.’

There are players who unequivocally need to leave and be replaced by better ones. There is room for improvement in almost every position, and without that, we will continue to struggle. Arteta knows it, he has said it consistently almost from the moment he took the job. That’s the work that has to be done during this transfer period. There needs to be a ruthless approach to squad management, under-performers need to go, better performers need to come in. It sounds basic, and probably a little easier said than done to an extent, however that’s the bottom line.

But, going to back to the start of the blog, that’s something we knew already. Last night was about as far from a surprise as you can get. Disappointing as it was, we still have a way of ending this season with success. Right now, you’d nearly fancy Arsenal more against a good side like Chelsea than one we’re ‘expected’ to beat, but that’s a discussion for next week. For now, we’ll look to Sunday for the final game of the Premier League season, and then cup final comes into sharp focus.

I will have a podcast for you a bit later, not an Arsecast Extra though, so no need for questions etc. That’ll be out mid-morning or so.