Home Arseblog, the arsenal blog Arsenal 3-2 Watford: A dismal season comes to an end at last 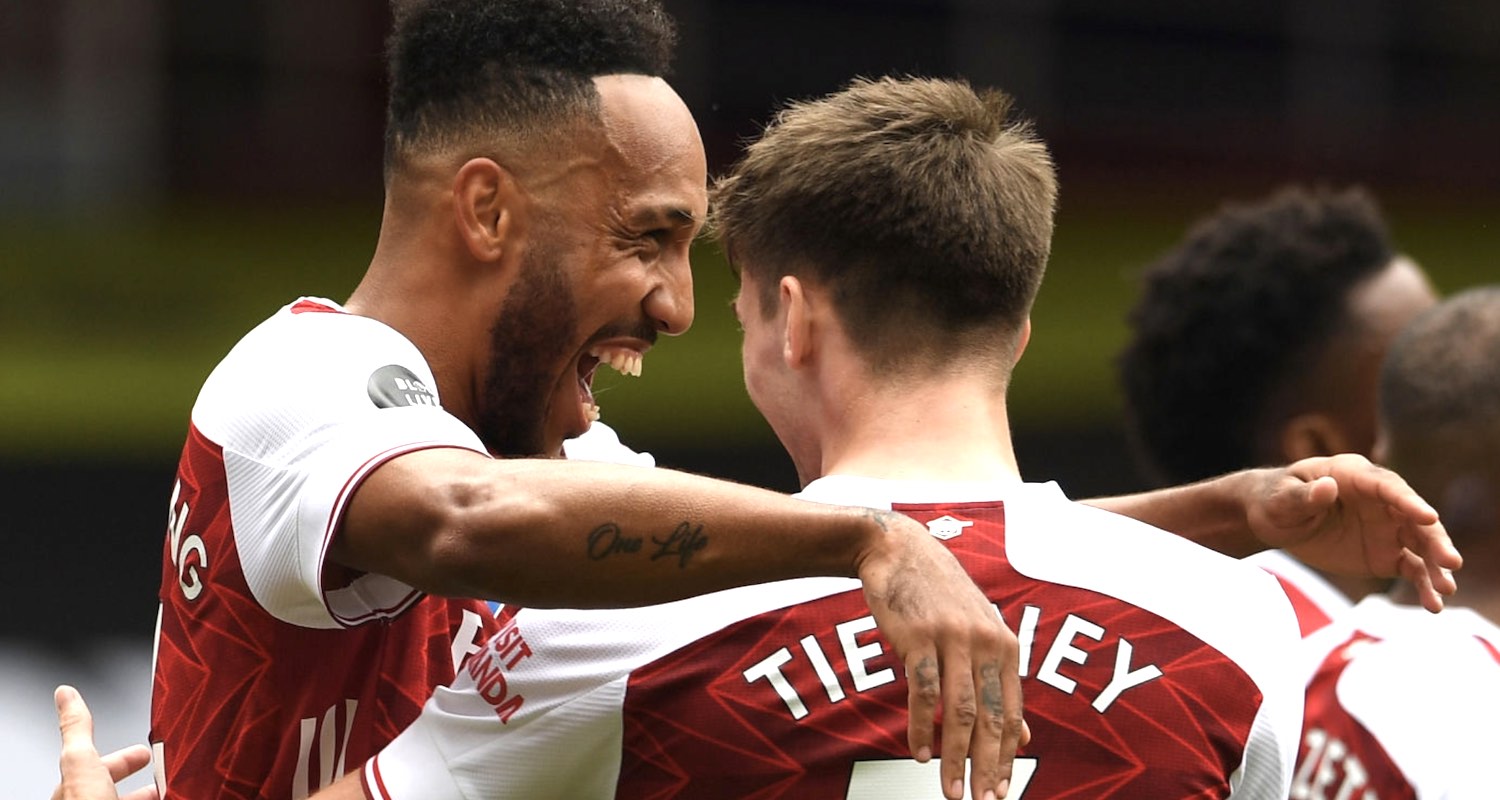 Arsenal finished what was a disappointing Premier League campaign with a win. That it was a characteristically sloppy one feels a bit apt. We went 3-0 up, let Watford back into it, and then had our goalkeeper to thank for keeping the lead. For me, our top three players of the season have been Pierre-Emerick Aubameyang, who scored twice to bring his total for the season to 27 (22 in the Premier League); then Bernd Leno and Emi Martinez. And that tells you a lot.

The captain put us ahead from the spot early on, in an incident which gave me great pleasure. I do not like VAR. I think its implementation has been cack-handed, to say the least, and the fact we had to wait ages for what was an obvious decision yesterday was painful. In real-time it looked like a penalty to me, when Dawson clearly barged Alexandre Lacazette in the Watford box. After one replay, I was 100% sure it was a penalty, but VAR kept us waiting. They replayed the incident, back and forth so many times I thought we might get a fun cameo from Larry Blackmon, and then they checked if Aubameyang had a pube offside in the build-up.

All the while, Mike Dean was waiting. The referee who saw the obvious foul in real-time and didn’t give the right decision. Eventually, they decided it was a penalty, and Dean’s face when he was overruled and was forced to give Arsenal a spot-kick was genuinely priceless. Look at it!

Not only was it hilarious because you knew he hated it, it was hilarious because you knew it gnawed at his soul. The faceless VAR goons in Stockley Park had undermined his authority, and his blatant disrespect of their decision will make for an uncomfortable time at the referees end of season party, I’m sure. The best part about it, of course, is that VAR was right and he was wrong. 100% wrong. He made a clear and obvious error, got pulled up on it, and he acted like a petulant child having to say sorry for something they’re not remotely sorry for. Except not just in front of his parents, but in full view of millions watching all over the world.

Yesterday, I loved VAR for a minute or two.

Watford reacted quite well to going behind, Emi had a couple of good saves to make, before Kieran Tierney scored his first Arsenal goal to make it 2-0. Not exactly the greatest strike you’ll ever see, but they all count. I enjoyed his ‘I liked it but there’s still work to do celebration too’, and every time I see him play he goes up in my estimation. The intensity he puts into every performance is just outstanding.

Aubameyang got his second of the game thanks to some slack Watford defending and an acrobatic finish, and with 33 minutes gone we were 3-0 up. Surely that was that, said nobody who has watched Arsenal play this season. At the back Rob Holding and David Luiz were forging a partnership like toothpaste and orange juice. It was not good. Luiz, inevitably, gave away another penalty, his 5th of the season. This is a new record by the way, nobody has ever conceded that many in a single season before.

I know people point to his career at Chelsea where he conceded 3 or something in 200 games, and suggest that being in the Arsenal defence is a key part of that statistic, but it feels more like the kind of record a player in steep decline would set for himself. Yesterday’s one was stupid, a wild slash at Welbeck whose shot had already been saved, and while there’s part of me that hopes he got it out of his system before the weekend, I’m really quite worried about him for the final.

We know he’s an emotional guy, and bar Man City he’s been dreadful in big games this season. He was wound up like a kite at Stamford Bridge earlier in the season – where he conceded a penalty AND got sent off – so I hope Mikel Arteta and his staff have serious words with him before Wembley. He can’t let the occasion get to him, and ultimately we need him because our options are so limited, particularly in the wake of the news about the seriousness of Shkodran Mustafi’s injury.

Danny Welbeck scored for Watford in the second half, nipping in front of Holding as Luiz was asleep at the near post. Abysmal defending again, and that meant a team really scrapping for their lives had a chance. The former Arsenal man was denied an equaliser by a superb save from Martinez. At the other end substitute Eddie Nketiah tried to set up Auba for the Golden Boot goal than go himself, Foster made a save to deny him, but in the end we held on to take three points and to finish 8th – our worst league position since 1995.

Watford go down to the Championship, along with Bournemouth, as Aston Villa took full advantage of the three points they picked up against us to stay up. I watched Troy Deeney’s interview afterwards, and while he has been a bit of a pantomime villain down the years, I thought he spoke pretty well. I felt for Welbeck too, but not the bloke who tried to kick Tierney off the pitch in frustration. People point to the fact that Watford have had four managers this season as a reason for their relegation, but that’s only one more than us! It’s not ideal though, in fairness.

Our mid-table finish should be a wake-up call for those on high. This is a club at a pivotal moment in its recent history. We can react, and do what we need to do to improve, or we settle in and get comfortable as also-rans. Here’s our performance this season: 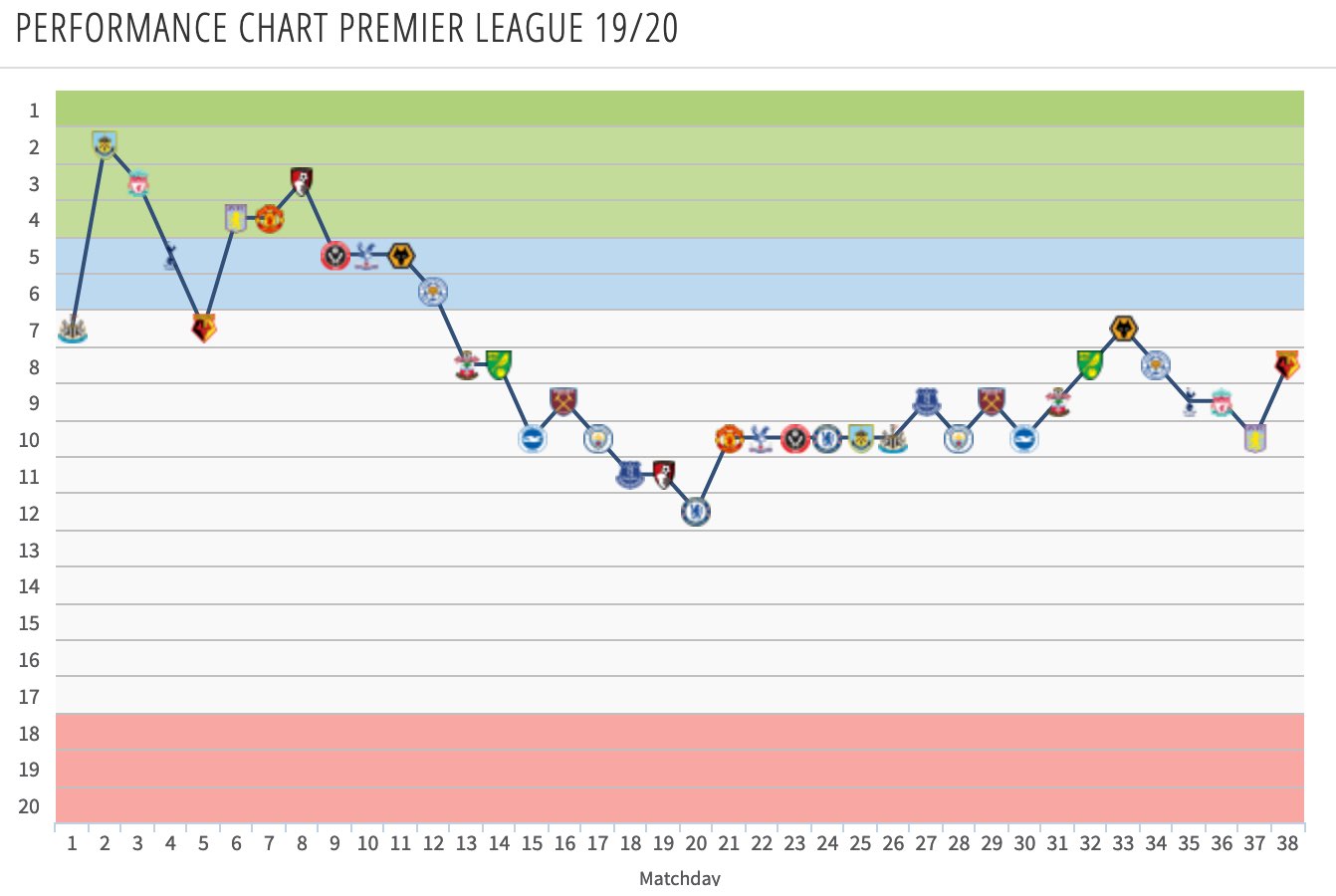 As Mikel Arteta said of our league performance after the Villa game, “It hurts so much. At the end of the day, we weren’t good enough to be with the top teams. It’s not the level for this football club.”

He has a massive job on his hands, but what gives me some optimism at the end of this dismal campaign, is that he makes no bones about where we are, what we have to do, and where he wants us to get back to. It’s easier said than done, of course, but he’s not playing it nice or trying to cover up the fact this has been a season I’m glad to consign to the history books. As I’ve pointed out before though, the people running the club need to remember this one, to learn from it, to make it better, or face the consequences.

We now have to prepare for Saturday, for Wembley, for the FA Cup final, a chance to end with a trophy and European football next season. There is so much riding on this game, it’s almost stomach churning. More on that throughout the week as we look forward to it and preview on the site and in the podcasts.

For now, a big thank you to all of you for being here throughout another Premier League season. What a strange, surreal one it has been for all sorts of reasons. Your continued support through reading, listening, and via our Patreon, is hugely appreciated by all of us here. It all continues, of course, we’ll keep chugging along as always, but I just wanted to express my gratitude to all of you as we experience the ups and downs and sideways and whirlybits of being Arsenal fans ❤️.

James and I will be recording an Arsecast Extra for you later on. As ever if you have questions or topics for discussion, send to @gunnerblog and @arseblog on Twitter with the hashtag #arsecastextra – or if you’re on Arseblog Member on Patreon, leave your question in the #arsecast-extra-questions channel on our Discord server.