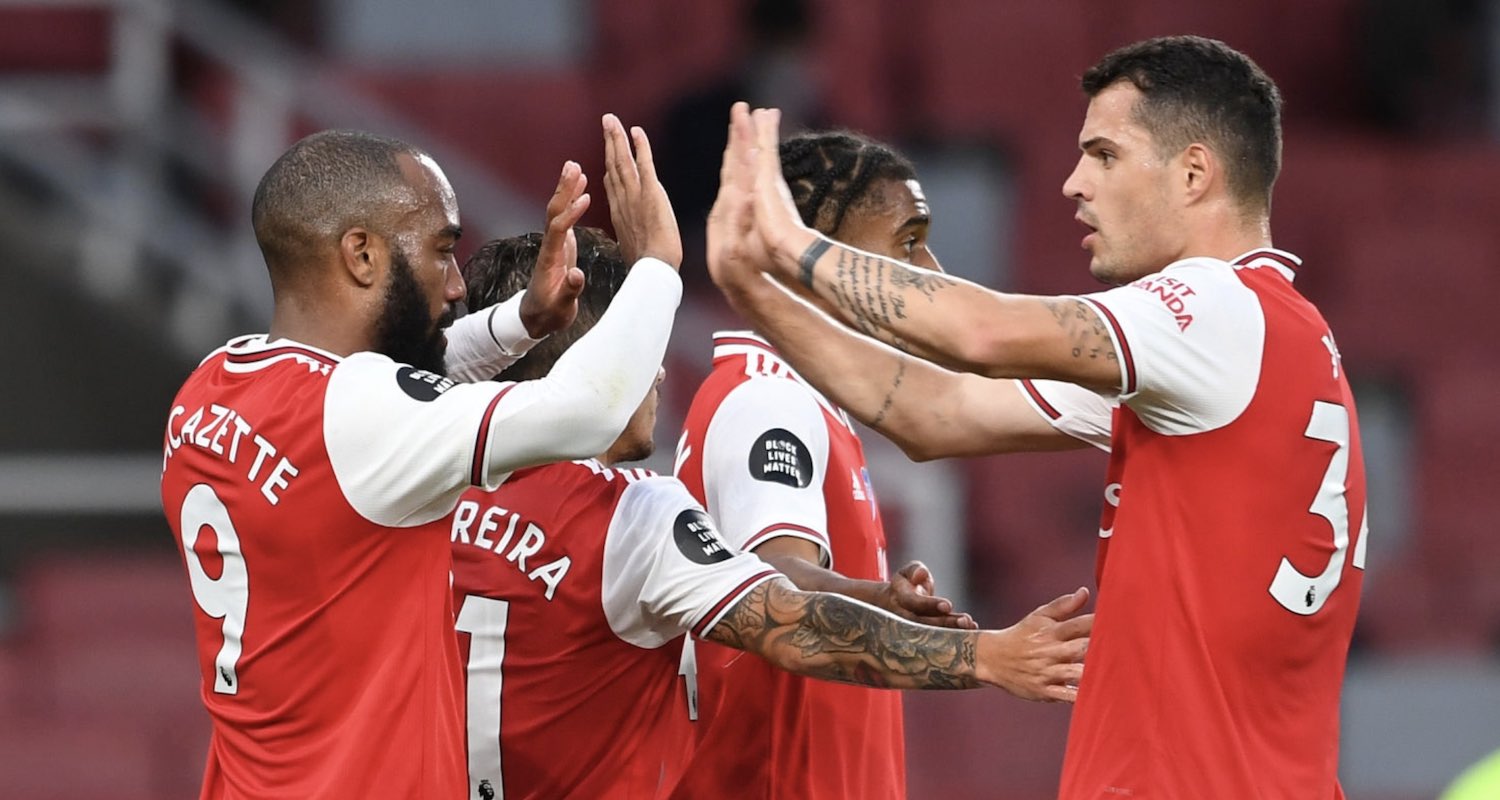 Well, that was pretty funny.

Mikel Arteta made it clear in his post-match interview what we’d all seen for the previous 90+ minutes, saying:

You only need to look at the difference between the two teams today. The gap is enormous.

Liverpool are so good. At times, I felt like we were playing against a team with an extra man. How did Robertson have so much space every time they spread the ball out to him on the left? Why couldn’t we find a way to pass the ball out of defence? The way they set up completely blocked off our passing lanes into midfield.

Kieran Tierney completed just 45% of his passes; Rob Holding was a little better at 61%; while David Luiz’s 75% seems remarkable to me given the fact my memory of him is looking up, seeing that he had nobody to pass to, and then lumping a long ball in the general direction of one of our forwards – few of which found their target.

This is reality of Luiz’s long passing last night: 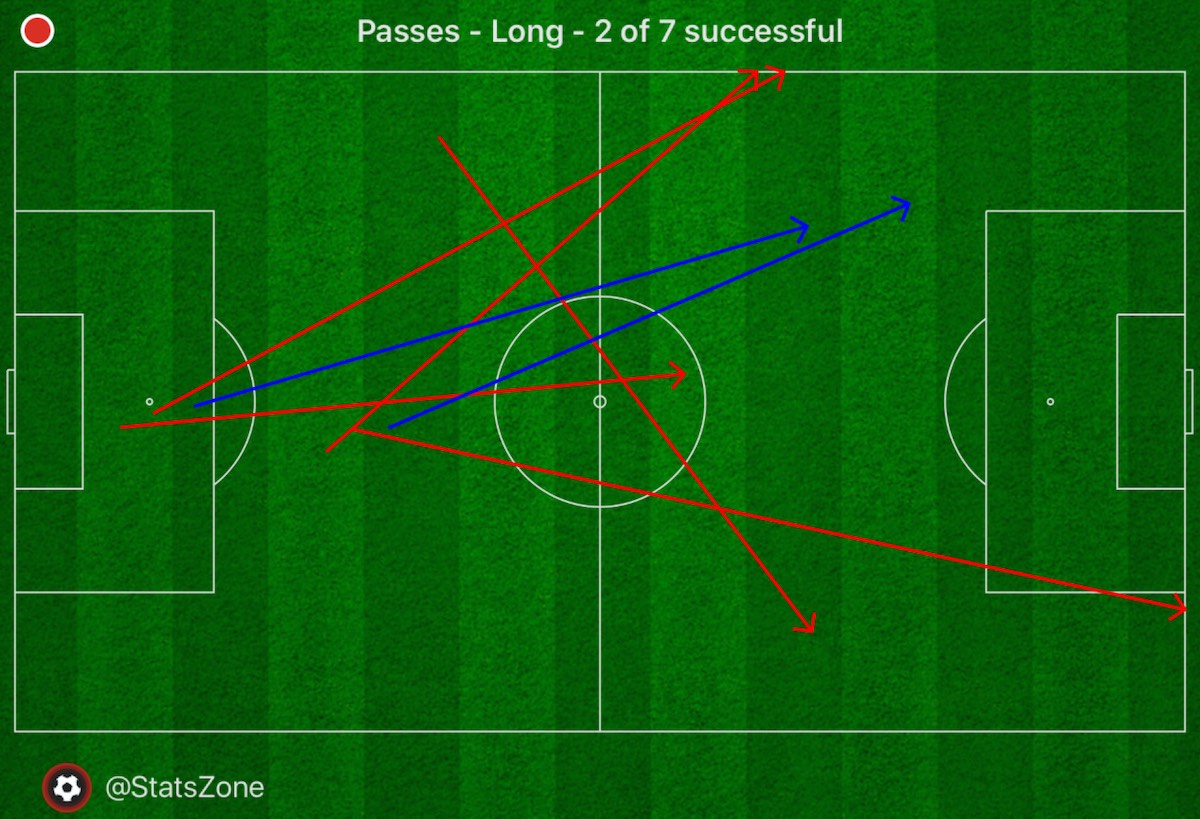 This is how I remember it: 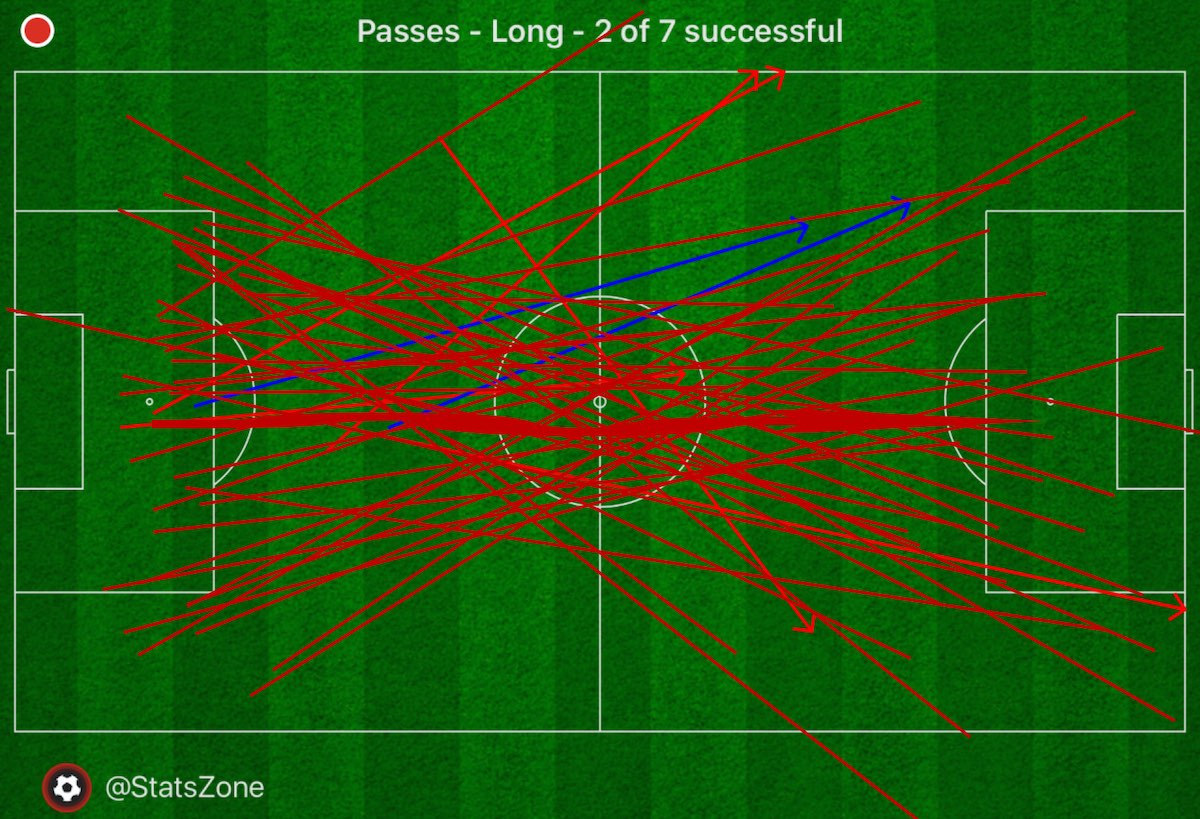 Liverpool’s front three and midfield three made it so difficult for us to play and get out of our own half. So their goal, after 20 minutes, was hardly against the run of play. I’ve watched it again and collectively the defending is not great. I have no idea what Cedric is doing trying to win the ball that high up the pitch other than trying to get another injury; Holding doesn’t close down Firmino at all; Luiz is drawn to the ball like a big woolly ant to a picnic; and Mane is there to pounce and score from close range. He is such a good player, and they are such a slick outfit it was hard not to worry it would be the first of many.

Happily, it turned out to be the first and the last. Just after the half hour we were level, thanks to a mistake from Shkodran van Dijk who under-hit a back-pass to Alisson. Alexandre Lacazette pounced, nabbing the ball, rounding the keeper and slotting home to make it 1-1.

It’s clear what had happened. Just before this, Rob Holding bodied Sadio Mane in an incident up the other end of the pitch. The shockwaves of that reverberated throughout the entire Liverpool team and this caused the Dutchman to be thrown of his very axis, making the error which led to the goal. Some say he’s still off balance today.

Then we got another. I’ve seen people blame the goalkeeper, and to be fair his pass out to the left hand side is poor, but watch van Dijk again. He is completely switched off. Lacazette is not, and deserves a lot of credit for being sharp and on his toes. He crossed for Reiss Nelson who had Pepe outside, but didn’t need him as he scored his first ever Premier League goal to make it 2-1.

The second half began with Alexander-Arnold committing the same foul on Saka that Eddie Nketiah got sent off for, but let’s not spoil the occasion by suggesting the crap Iniesta looking referee had a bad game or that VAR is essentially the Oric-1 of technology (there’s one for you 80s computer kids). That’s not the story of the second 45 minutes. The story is that Liverpool battered us. They had 17 shots, 20 crosses, 312 passes to our 58, and dominated the game.

At times it felt like some kind of guerilla marketing campaign for eggs because there were so many scrambles in our box. But that highlighted some of what was good about what we did. All jokes aside, they were all over us and all you can do in that situation is dig in, try hard to remain organised, defend like bastards, and hope you get a bit of luck along the way. We had some of the latter as Liverpool missed a couple of chances you’d normally expect them to take, but Mikel Arteta will be rightly pleased about what he got defensively from his players.

And then right at the end, after Joe Willock had sliced a chance wide to make it 3-1, came the moment when it could have kicked us in squarely the nuts. With 94’47 of the 95 minutes on the clock, the ball came to Alexander-Arnold about 30 yards out. He whacked a shot which took a deflection which was taking it into the back of the Arsenal net, but there was Emi Martinez with a superb save to keep us ahead. 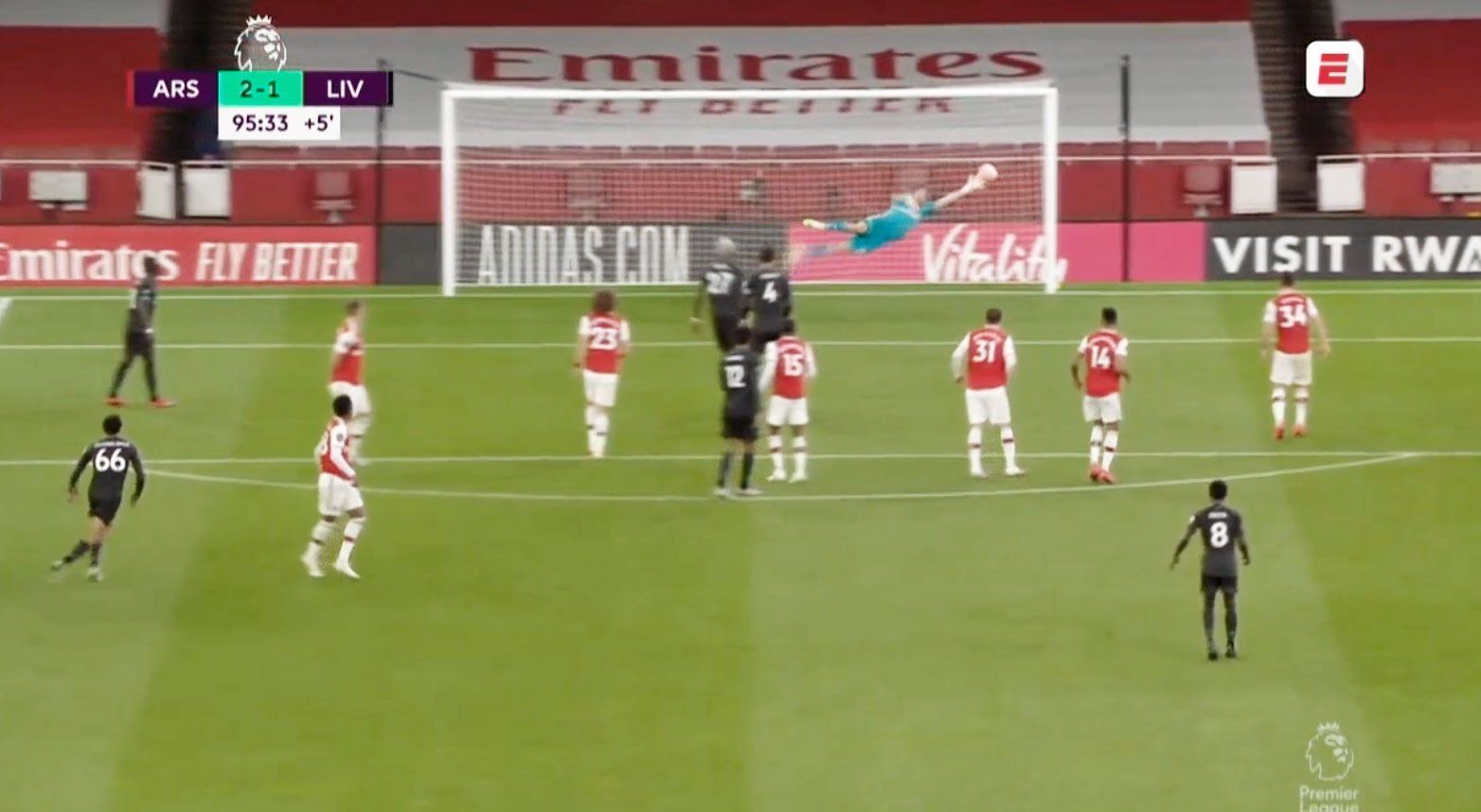 Another night, that goes in. Another night, to be completely fair, Liverpool don’t make those mistakes and turn their dominance into a comfortable win, but it wasn’t another night last night. It was one of those rare occasions when you get absolutely pummeled by the opposition and win a game. We had 3 shots, scored twice, and then soaked up everything Liverpool had to offer. Football, as they say, is a funny old game, and last night was definitely amusing.

Afterwards, Arteta was pleased with what he got from his side in terms of the commitment and fight they showed:

If you want to win these games at the moment, with the difference of the two teams, we need to put everything on the line to get the points. I am really pleased because they can do it. It’s about keeping the right spirit and level of attention and I’m delighted that we’ve done it today.

However, he wasn’t pulling any punches – again – about the size of the job he has on his hands in trying to bridge the gap between the two teams, calling it ‘massive’. He was once more unequivocal that investment is required to make it happen, and was asked if he was worried about a lack of funds:

It’s a big concern. You know, you have to see how they build those squads, there’s no magic. You need to improve the squad with quality, quality players and you need bigger squads to compete in this competition. That’s the challenge.

I think it’s pretty clear that we need to strengthen the squad.

It’s a drum I hope he keeps banging because while that message is one that will obviously resonate with fans, it needs to reach high places. Our Head of Football and our Technical Director will have seen that last night and been left in no doubt as to the gulf between Arsenal and Liverpool. Football is cyclical at times, the champions are clearly at the crest of a wave, we’re splashing around like made to stop from being pulled under by a rip-tide, but even so, what we saw on the pitch last night was a stark reminder of the work the ownership and the executives have to do to play their part in helping Arteta do his work as well as he can.

We have some clarity now in terms of when things are going to happen. The Premier League announced yesterday that the transfer window would run between July 27th and October 5th, and we have a lot of work to do. That’s something we can discuss over the coming weeks, I’m sure, but before the end it’s worth pointing out that last night’s win leaves us with half a chance of a European finish with just a couple of games to go. We’ll have to win both and hope that Sp*rs and Sheffield United drop points, but it’s not beyond the realms of possibility.

Attention now turns to Saturday, to Wembley, to the FA Cup semi-final against Man City. Will last night be a confidence boost? Perhaps, but I think we also need to play a bit better too. I don’t think we can get away with a side like City being that much on top, but hey, we’ll preview that in the coming days.

For now, let’s enjoy Jurgen Klopp’s face after our second goal last night. It’s almost exactly the same face I was making as I was watching at home: 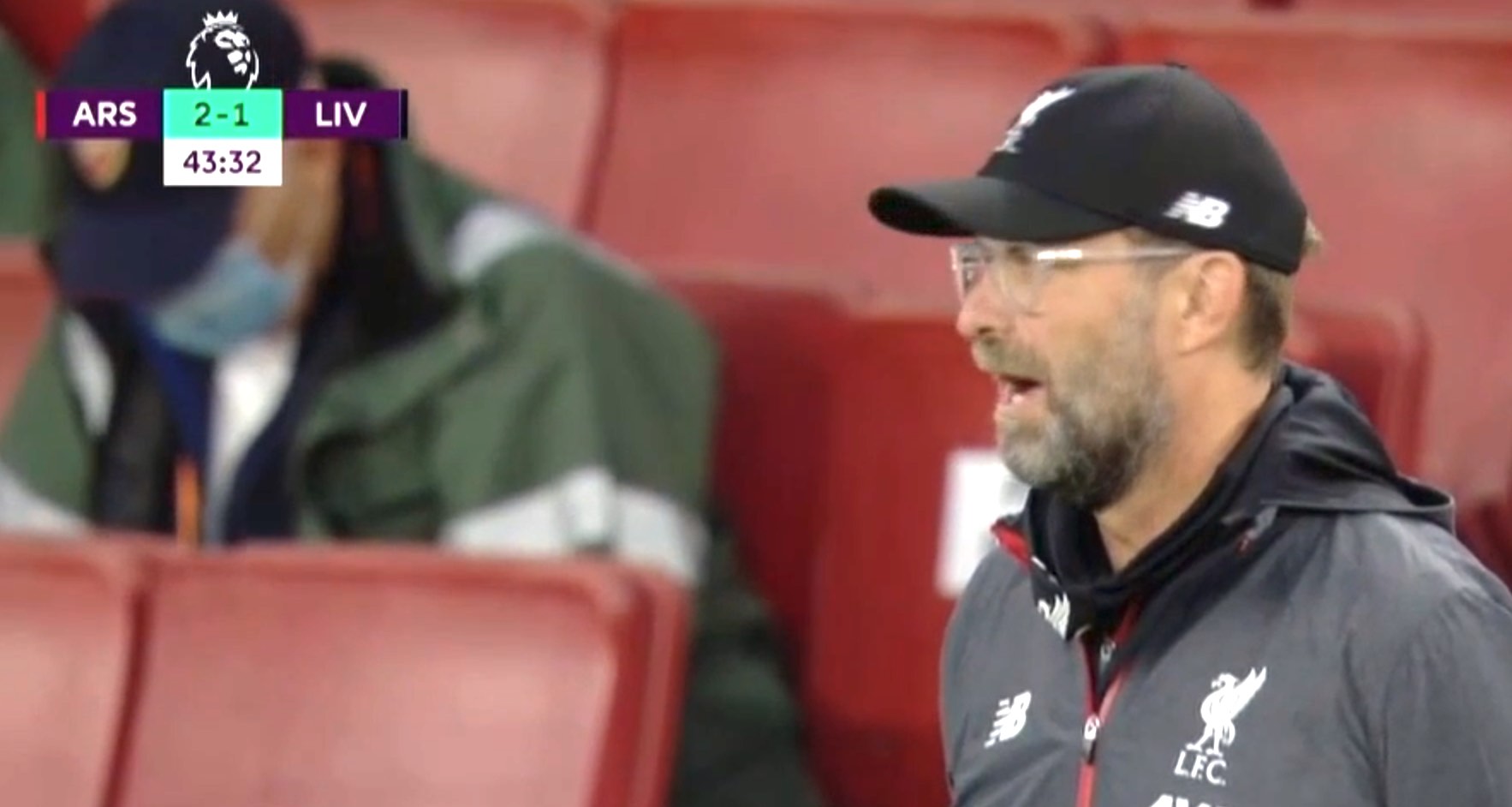 For those who want to relive last night in audio format, James and I will be recording an Arsecast Extra for you this morning. As ever if you have questions or topics for discussion, send to @gunnerblog and @arseblog on Twitter with the hashtag #arsecastextra – or if you’re on Arseblog Member on Patreon, leave your question in the #arsecast-extra-questions channel on our Discord server.

* the headline, as I’m sure you’ve guessed, is a leetle-bit joke