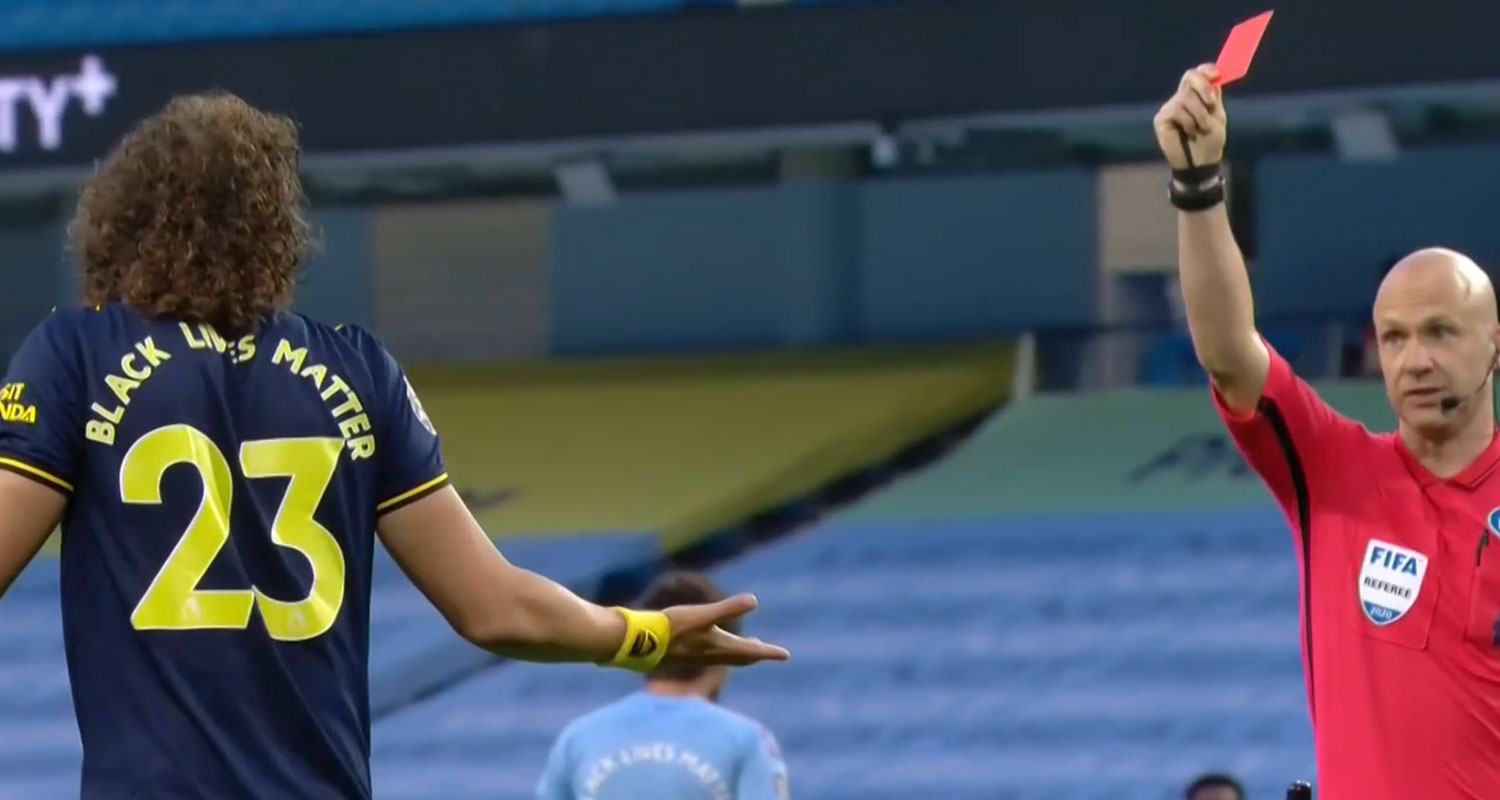 Over 100 days without any football, and last night Arsenal do that. My club. It’s like you’ve never been away!

“Everything went wrong,” said Mikel Arteta afterwards, and if there’s anyone who can argue with that, I’d like to meet them. All the things we’ve missed about football were there on display for us in a surreal, atmosphere-less package, like excitedly opening a box on Christmas morning and finding a freshly laid turd.

It’s incredible, football has been gone for months, society as we know it has changed radically, there are protests in the streets, there is political upheaval, and in one swoop of a football manager’s decision we’re all talking about Ozil again. Arteta said he left him out for ‘tactical reasons‘.

Sound the ‘We all know that’s bullshit but you’re not going public with the real reason you left him out’ klaxon. Unai Emery must have left it on the manager’s desk for Arteta with a little note that said ‘Good ebening, you will need this’. Ozil wasn’t injured, wasn’t ill, and couldn’t make a squad in which nine subs can be named because we have no tactical use for him?

I don’t think I need to say any more about it than that, other than this has been going on for just too long now, and as a club we really need to move on from something which hangs over us like a cloud.

Within a couple of minutes Granit Xhaka was injured. Not because of the three month layoff and muscle strain. Not because he got fouled by a Man City player. But because he collided with one of his own men, Matteo Guendouzi. It looked pretty innocuous at first glance, but he stayed down, and left the field on a stretcher. Whatever else about the Swiss, he’s usually a pretty robust fella, so to suffer what looks like a semi-serious injury within minutes of football starting again is a stroke of ill-fortune.

Not long afterwards, Pablo Mari – who had started the game a bit clumsily by conceding a free kick on the edge of the box when he kicked Raheem Sterling in the nipples – looked to pick up an Achilles tendon problem. He grimaced, tried to walk it off, but he too went down and was unable to continue.

While City were obviously the better team, I thought we were doing reasonably ok until the Brazilian came on. Now, I’m not putting everything down to him, even if he did come out afterwards and insist ‘It was all my fault’, in a somewhat bizarre post-match interview. However, some things were definitely his fault.

Such as City’s first goal, in which his attempt to clear the ball was akin to putting a tutu on a drunk elephant and asking him to perform Swan Lake. And also their second goal in which he got turned by Mahrez, and brought him down to concede his fourth stupid penalty of the season after the stupid ones at Liverpool, Watford and Chelsea (where at least he had some mitigation because Shkodran Mustafi’s stupidity was a major factor).

Still, that’s a lot of penalties for an experienced player to give away. Afterwards, the Sky pundits sort-of laughed and said ‘Well, that’s David Luiz’, and it is. They’re right. Which makes you understand a) why Arteta decided not to start him but b) raises even more questions over the decision making at executive level when we signed him in the summer. It also makes you wonder why the manager seems keen to keep him. Does it say more about Luiz, or the other options he has available to him?

He is, by all accounts, a very nice man, and everyone loves him. But that’s just not enough, is it? You wouldn’t pick Tom Hanks to play centre-half. Actually, given our options, with Sokratis and Chambers injured, Luiz now suspended for 2 games after his second red card of the season, and a fully fit Rob Holding not even in the squad last night, someone getting on the phone to Forrest Gump seems fairly appropriate.

When City keeper Ederson, probably bored off his tits with nothing to do, decided to re-enact the Schumacher/Battiston incident from the 1982 World Cup (flattening his own player rather than an opponent though), poor old Eric Garcia was laid out for some time, requiring a long period of treatment. With City having already used all their subs, it meant it was 10 v 10 for 11 minutes of added time.

Rather than take advantage of City’s ill-fortune in a prolonged period of injury-time, we conceded again. Mustafi’s response to the threat of Aguero was to throw himself through the air like Superman, but without the power of flight. Watch the replays again. It’s actually hilarious, because all you can do at this point is laugh. Nobody tracked Foden who buried it for 3-0.

Our commitment to being Arsenal is absolutely unrivaled. Take Arsenal away for however long you like, bury it deep beneath the earth for eons in a titanium capsule from which no part of our essence can be seen, heard or felt, and we can just dig it up and go from zero to full-on, turbo-charged, hyper-drive, light-speed Arsenal in the blink of an eye.

This was our game in hand. It wasn’t a game I thought we’d win anyway, and in the circumstances it seems like one we can pretty easily consign to the dustbin. We were unlucky in some respects, with the injuries, and the fact that Luiz had one of those nights where you wonder if his parents were Calamity Jane and Mr Magoo. We were also playing one of the best teams in the league after a three month break, and the entire context of this game was pretty surreal.

Arteta pretty much summed it up afterwards:

I want to delete the game from the hard drive. A lot of things happened and there’s no point taking a lot of things from this game.

Just delete it, and start preparing for the game at Brighton.

There were some small positives. Bernd Leno showed that he’s a great shot-stopper, but the flip-side of that is we’d all be happier if he wasn’t quite as busy. Hector Bellerin and Kieran Tierney, both of whom have struggled with injury this season, got 90 minutes under their belts, and there were just one or two first half moments where, with sharper decision making, we might have caused City some problems.

They are small things though. I do think there are talking points regarding team selection, and the fact he went with Bukayo Saka and Joe Willock for example. Can we read into this a desire to plan for the future, with players he wants to give as many minutes to as possible? Neither had a particularly eye-catching night, but as I’ve said, I don’t think this is a game we can take too many definitive conclusions from.

It’s something James and I will discuss in a podcast this morning. It’s more a post-game discussion than a regular Arsecast Extra, so we won’t be doing the questions part of the show, but we should have the episode for you before midday.

I know it’s easy to say we need to focus on Brighton, because games like last night only highlight the enormous gap that exists between Arsenal and a club at the level we say we aspire too, but that can only be closed by being better at the bread and butter of the Premier League first.

To Saturday, and whatever that brings.