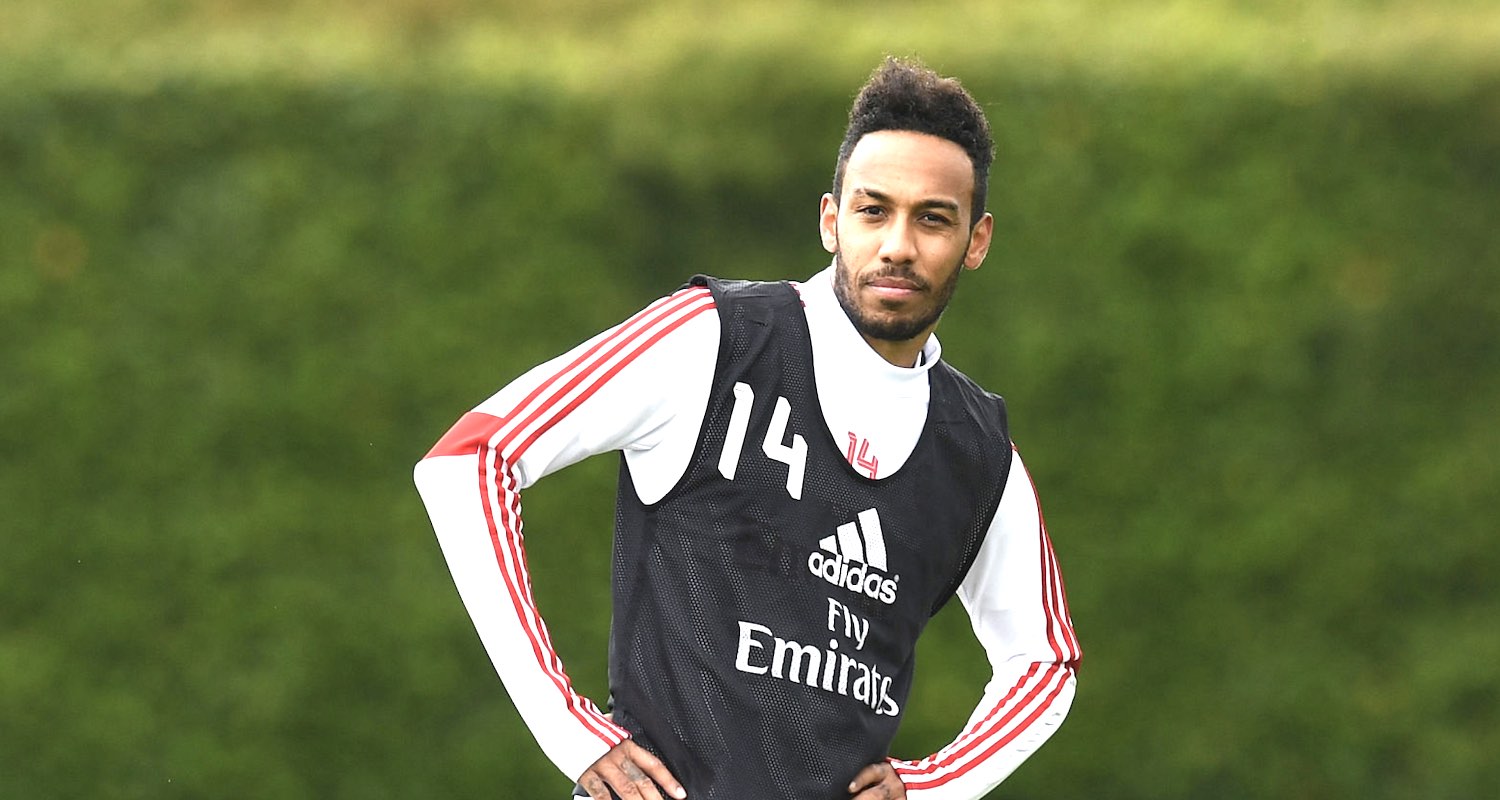 Morning all, hope you had a good weekend. The countdown to football is well and truly on now, in just a couple of days we’ll be playing Man City. Mikel Arteta is meeting the press today so we should get some insight and information from him regarding the game, the players, the squad, and so on. That press conference is also being held on Zoom, apparently, so there’s a very 2020 development for you.

Having stopped live coverage of the pressers during the Unai Emery era, they had started again under Arteta, so I wonder if we’ll get to see it. There might be technological issues to contend with, but we’ll see what happens later. We’ll cover the news over on Arseblog News which is about to get busy again after a rather slow few months.

For today’s blog though, there’s only one story and that’s Pierre-Emerick Aubameyang who spoke to French outlet Telefoot over the weekend. There’s a full transcript of what he had to say over on GFFN in which he talks about other things, but the most important part was his future. As everyone knows, he has just 12 months left on his current contract, and it’s fair to say Arsenal are in a difficult position.

Before we look at the options available to us, this is what he had to say. He spoke about wanting to win titles, a big consideration for a player about to turn 31 in a few days time. Then he touched on his future at the club:

“Recently I have not received an offer to extend, but of course we have had exchanges with the club, for a fair few months now. They know very well why so far nothing has happened. They have the keys. It’s up to them to do their work and after that we will see how things go.

“As you said it is a turning point in my career, and I will be very frank with everyone, it will certainly be a very difficult decision to make. Because I still have not decided and we will see.

“It will maybe be the most important decision of my career.”

It’s fairly typical footballer speak, the kind we’ve heard many times before as Arsenal fans, and if you were reading between the lines, you wouldn’t put too much money on Aubameyang being with us next season. There are three basic scenarios:

1 – He is sold this summer because he/we can’t agree terms on a new deal.

2 – He stays with us for one more season and leaves for free next summer, with Arsenal valuing his goals more than any transfer fee we might receive.

It’s a tricky one, and made even more so by the context in which all this is happening. The Covid-19 crisis, and its impact on football was not something anyone was expecting. All the stuff that goes on in the background regarding transfers, where players and agents sound out potential moves, happen over a long period of time. This isn’t something he’ll have just started thinking about during lockdown, and it complicates things for everyone.

From the player’s perspective, will the potential destinations he had open to him remain so whenever the market opens again? Do those clubs have the finance to make the deals happen, both in terms of a transfer fee and the wages he would be demanding? Might the best offer he gets come from his current club, even if he has doubts – which seem obvious – about whether or not he can achieve his sporting ambitions?

From an Arsenal point of view, is a reduced transfer fee worth less to us than the goals he will score if we keep him, running the risk of letting him leave for free? This is a club that forced through a pay cut for players because the wage bill is already too high, so can we push the boat out and give Aubameyang a huge pay-rise at his age? The Mesut Ozil deal will be seen as something we can’t repeat, burdening ourselves with a commitment to a player who, while still hugely effective, is heading towards the September of his career.

They also have to consider where the goals are going to come from if we do sell him? How much can we afford to invest? What kind of player can we get for whatever money we have available to us when the transfer market does open? He is clearly the most consistent goalscorer we have in the team by some distance, and when you look at the players around him, it’s hard to have too much confidence they could pick up all the slack.

Hanging over all this is the legacy of last summer, in which we saw tens of millions of pounds worth of talent in the shape of Aaron Ramsey and Danny Welbeck leave for free. So too the Alexis Sanchez and Mesut Ozil situations, in which both players were allowed to go into the final year of their deals. The Alexis/Mkhitaryan swap is one of the worst pieces of transfer business we have ever done, and our desperation not to lose both our big stars for free handed Ozil’s people so much leverage in negotiations they could basically ask for whatever they wanted … which they did, and we gave it to them.

I was optimistic about Raul Sanllehi’s insistence that managing player contracts had to be improved. It had clearly been an issue that needed improvement. To remind people, this is what he had to say in October 2018, after he’d been appointed Head of Football following the departure of Ivan Gazidis to AC Milan:

I do believe that a player’s contract should never go to the last year, as a policy. Normally the contracts of the players are for five years. You need to have a clear idea of what you want to do with that player when he is in the third year, at the latest.

So, you either extend at that point, or you sell. It makes a lot of sense, and while Sanllehi has inherited some of the difficulties we face, it doesn’t reflect particularly well on him that this summer we have Aubameyang, Sokratis, Shkodran Mustafi and Mesut Ozil all going into the final year of their deals, while not forgetting Bukayo Saka who is in a similar situation. Having presided over the departures of Ramsey and Welbeck for free, you have to question the efficacy of his work. Lessons don’t appear to have been learned. On Saka, by the way, if we lose him – either because we’re forced to sell him this summer, or he departs for free next summer – heads should roll at executive level.

This is all made even more difficult because of the unprecedented crisis football, and the world, has endured over the last few months. There’s no denying that, and while I can appreciate how it makes everyone’s lives and decision making more complicated, there were things we could/should have done before now to insulate ourselves from it better. We’ve been caught with our pants down a bit, and how it’s all going to play out is anybody’s guess.

My gut feeling is that if Aubameyang won’t sign a new deal, even if one is offered to him, we have no choice as a club but to sell. Perhaps the transfer fee won’t be as high as it might have been previously, but that could also apply to any potential replacements we might be targetting. I’d be sorry to see him go, and I think we’ll struggle without his goals, but if there’s a time to just start again it’s now for Arsenal. A new young manager, a crop of good young players, and we hit a kind of reset button.

The worry, of course, is that our recruitment is key to a process like this, and it’s hard to have a lot of faith in the people responsible for that when they also have to take ownership for some of the problems we’re facing in terms of the squad. How many gems like Gabriel Martinelli can we uncover? We’ve seen them spend a significant amount of money on Nicolas Pepe who hasn’t lived up to expectations yet, and pay hugely over the odds for the services of a veteran centre-half for one year. Which is to say that there have been some successes in the market, but too many deals have questions marks over them for various reasons.

All in all, there’s a critical few months ahead for the people running this football club. We have a very smart, very ambitious young manager who wants to get us back to where we all want to see Arsenal, but without the right people above him making good decisions, that’s going to be even more difficult. As we prepare to focus on what happens on the pitch again after so long without football, it’s going to be important to keep one eye on what happens upstairs.

Right, that’s it for now. James and I will be recording an Arsecast Extra for you a bit later on. As ever if you have questions or topics for discussion, send to @gunnerblog and @arseblog on Twitter with the hashtag #arsecastextra – or if you’re on Arseblog Member on Patreon, leave your question in the #arsecast-extra-questions channel on our Discord server.