Home Arseblog, the arsenal blog Arsenal 4-0 Newcastle: Pepe shines on a day of many positives 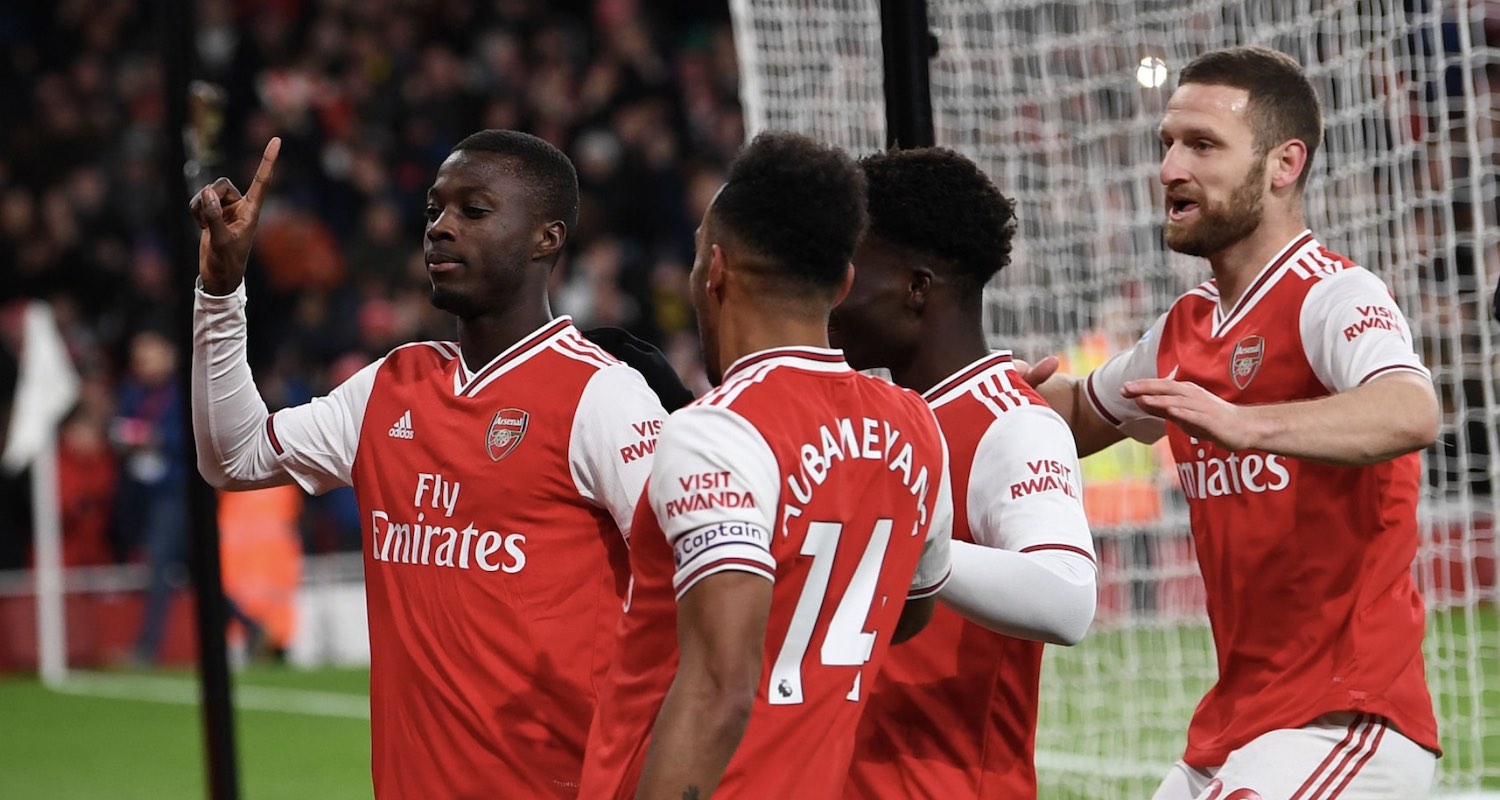 Mikel Arteta made some changes. For a while it looked as if nothing much was different. But then it was quite different indeed. Arsenal scored four times in the second half to take three very enjoyable points. It’s fair to say that the scoreline had some gloss based on the game itself, but that’s not a complaint, to be clear – it’s about time we did something like that, and I was glad to see it.

The surprise inclusions of Dani Ceballos in midfield, his first start since November, and Eddie Nketiah up front, his first ever Premier League start, showed the manager was prepared to do something out of the ordinary to get his team going again. Afterwards, he talked up the hard work both those players had been doing in training (Ceballos trained like an animal, he said), but it also felt a bit like their inclusion was a message to players they were potentially replacing.

Alexandre Lacazette hadn’t scored since December, so dropping out can’t have been a huge surprise to him. The fact that it was for Nketiah, with Pierre-Emerick Aubameyang stationed out wide again, might have been though. We know the captain is capable of scoring from there, but had it been Gabriel Martinelli left and Auba up front it would have made more sense based on what we’ve seen so far this season. Nketiah’s selection might have been primarily to give him a chance, but I’m sure there was an element of doing something that would shake up the mindset of his players.

Similarly, Ceballos was selected ahead of Lucas Torreira, but interestingly too there was no place in the squad at all for Matteo Guendouzi. Again, Arteta’s justification for this was to point to the players in the squad who had trained better and were more deserving of a place. It’s not uncommon for a young player to need a reminder that it’s not always going to be easy and that you can’t take anything for granted. Guendouzi got that yesterday.

That said, there was something about the way Ceballos played that made a lot of sense as the game went on. The first half was difficult, Newcastle were really well organised defensively, we found it hard to break between their lines, and at the other end they did look dangerous at times. Leno had to make a smart save to stop a Ceballos own goal as he deflected a shot towards his own net.

As time went on though, we came to terms with that, and I don’t think it’s a coincidence that Mesut Ozil’s best game in a long time came with another more technical midfielder on the pitch. Ceballos leaned right, our third highest pass combination (after the two centre-halves), was Bellerin to his compatriot, giving us more balance on that side of the pitch. A key part of what the on-loan Real Madrid man did was how hard he hit his passes. We have a tendency to roll the ball to one another, sometimes you need to whack it to your teammate. It gives you just that extra bit of time to do something, and while it wasn’t a massive factor in what happened, it was notable all the same.

Yet for all the late promise in the opening period, a half-time stalemate felt a bit too familiar. Been there, done that, drawn the t-shirt. Much like the FA Cup game against Leeds though, the second half was so much better. It wasn’t as if Newcastle we were without threat – they hit the post at 2-0, a goal which might have seen us wobble a bit had it gone in, but there was so much to enjoy from an Arsenal point of view.

First and foremost was Nicolas Pepe. Having created an early chance for Nketiah which the 20 year old swiveled on and hit the bar with, he provided the assist for Pierre-Emerick Aubameyang’s opener with a floated ball to the back post. The striker deserves plenty of credit for a neck-straining header which you’d associate with a more traditional centre-forward than him. He had to generate most of the power himself, and it flew beyond the keeper into the far corner. It was a goal that lifted everything. The players, the crowd, the noise levels, the energy fed into the team and played a big part in what came next.

Bukayo Saka’s star is on the rise. The 18 year old has been a huge positive this season, and going into the game was the player with the most assists for us this season. It was a show of faith in him that even though the more experienced Sead Kolasinac was fit again, Arteta kept faith with Saka, and he was rewarded by an outrageously good assist for our second goal. Cleverly moving into space vacated by Aubameyang, he picked up the ball, nutmegged Lazaro and fed Pepe in the middle who finished well. It was quite similar the goal against Man Utd last month, and with two goals in three minutes we had a cushion to play with – something we’ve rarely had of late.

Newcastle sent on subs to try and add some pressing, and as mentioned they did hit the post via the ridiculously fast Saint-Maxim, but in general we looked comfortable. That our third goal came after 35 passes during which Newcastle couldn’t get near the ball was testament to that. We were sensibly keeping the ball in the late stages of the game knowing that if they didn’t have it there was no danger. That we then managed to create something from it was lovely, and I suspect of all the goals we scored yesterday, Arteta will have been most pleased with that one.

Ozil was at the heart of it, picking up a nice Xhaka pass and driving towards their box. The precision that has sometimes been missing from his passing of late was there again, delivering it into the path of Pepe. He fed Lacazette, the substitute turned and played the ball back into the path of the German, and while the keeper should probably have done better with the finish, it was delicious to see us score that kind of goal again.

The fact that Lacazette finally broke his goal drought late in injury time was the cherry on top of the icing on the cake. Again Pepe was the provider, squaring after being sent through by a lovely Joe Willock pass, and the Frenchman’s finish fooled the keeper when he kicked it off his other foot, deflecting the ball into the net. Sometimes when the chips are down, you need a bit of luck, and that’s what he got. His celebration, and that of his teammates, showed you how much the goal meant, and hopefully that will go some way to liberating him of the burden he’s been playing with for too long now.

We talked about turning those draws into wins and those margins that we could improve to translate that into more points. It was going to be very important in the first game at home after the break to get confidence like we’ve done today, so I’m very happy with that.

Leaving aside all other analysis for a moment, that is the main thing here. We had to see an upturn in results after so many draws, and while it was difficult at first and it took us some time to get going, that’s exactly what we got in the end. It was a day on which there were plenty of positives too:

The ultimate target now is to improve as a team and win against Olympiacos on Thursday and improve on today’s performance.

That’s how it should be. Nobody should get carried away by one win, we’re all well aware that a single victory doesn’t fix everything, but it’s a building block to more. Find that winning habit, produce performances and results like this with some consistency, and we’ll all be much happier.

At the same time though, having been starved of three points in the Premier League since the 2-0 win over Man Utd on New Year’s Day, I think we’re more than entitled to bask in this one for a little bit, and to enjoy the fact that there has been a substantive improvement after the break and the extra training. We won a game, we can let ourselves be happy about that as we prepare for the next one.

Right. That’s it for now. James and I will be recording an Arsecast Extra this morning. We wouldn’t leave you pod-less at a time like this. As ever if you have questions or topics for discussion, send to @gunnerblog and @arseblog on Twitter with the hashtag #arsecastextra – or if you’re on Arseblog Member on Patreon, leave your question in the #arsecast-extra-questions channel on our Discord server.