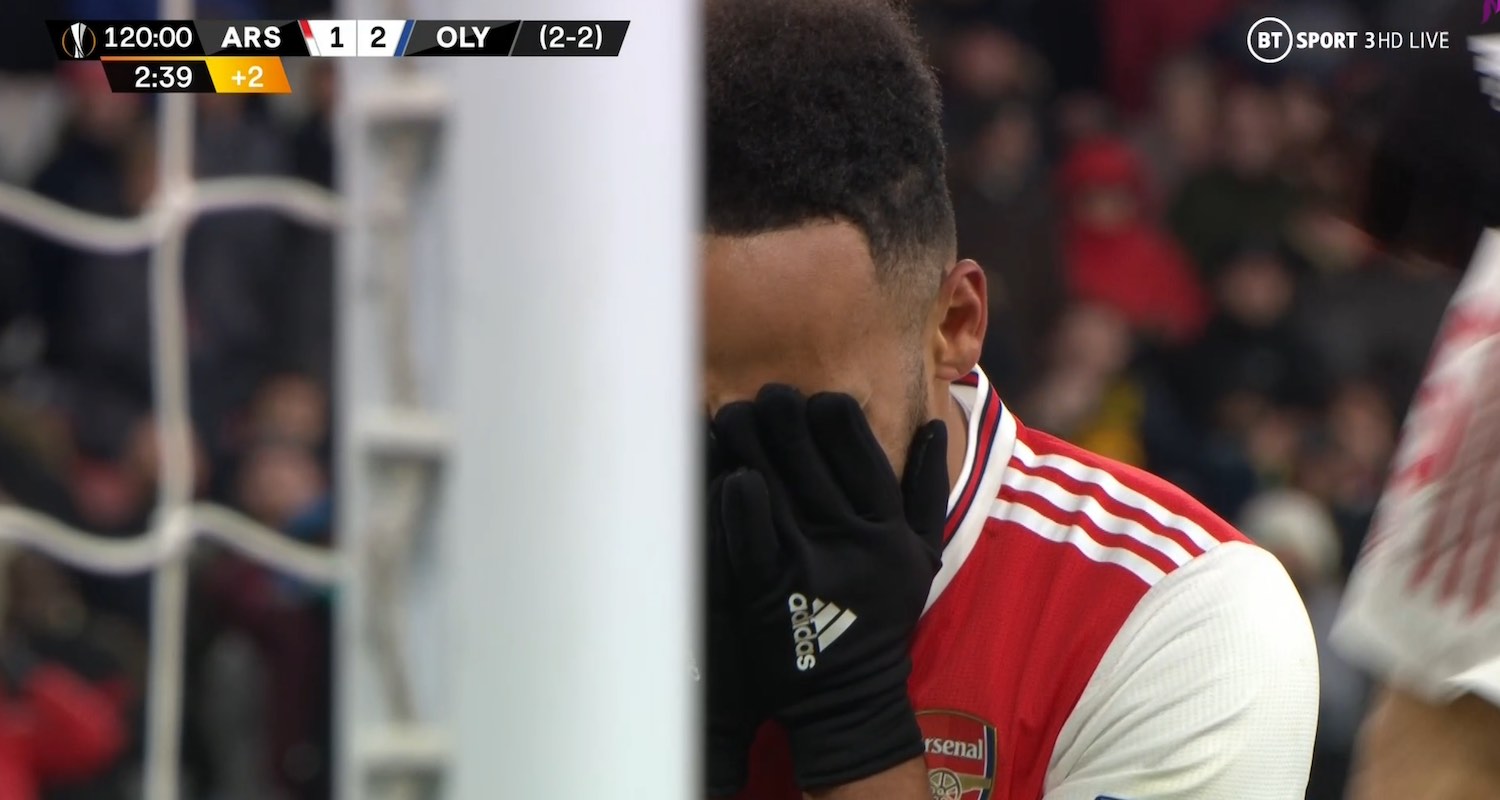 Arsenal’s Europa League campaign came to a dramatic end last night, as a late Olympiacos goal in the second half of extra-time was compounded by an extraordinary miss from Pierre-Emerick Aubameyang – the man whose superb goal looked as if it was going to qualify us for Round of 16.

Football can be weird and cruel, and it was hard not to feel for the captain who looked distraught at what had happened. You can understand why, but to put the blame on him after he did his utmost to drag us through to the next round is harsh. Yes, it was the kind of chance you expect any striker to score, but Arsenal’s problems on the night went far, far beyond him.

In terms of the team selection, I had no issues with it at kick off. Mikel Arteta chose basically the same team that beat Everton, with Ozil, Lacazette, and Pepe playing with Aubameyang – forming what I hoped would be the kind of attacking unit at home that Olympiacos would find difficult to cope with. The first half was dull affair though – we never got going, and one the piece of decent football we played saw the ball in the back of the net via Xhaka, Saka and then Lacazette, but the offside flag ruled that out.

It can happen though, you have a 45 minutes where it doesn’t click, you come in at the break and you sort it out. I don’t know what happened in the dressing room but there wasn’t much change to the way we played. Again, we looked leaden-footed, off the pace, just not quite at it. Olympiacos were very well organised, and with lots of the ball we did that horseshoe thing with our passing again, going left to right and right to left and left to right without much incisiveness. When we did put ourselves in a position to do something in the final third, the final ball was – almost to a man – utterly dismal.

Set-pieces were costly against Everton on Sunday, and so they were again last night. Olympiacos won a corner after Bellerin wasn’t strong enough in the tackle, and from there the defending left a lot to be desired. Cisse lurked on the edge of the box, Ozil and Aubameyang are watching him both him and Ba. Ozil is to busy watching to notice the corner being taken, Cisse runs beyond Aubameyang, while David Luiz stands waiting for the ball to come to him rather than attacking it as real defender should. The finish for the big centre-half was easy, a gift-wrapped goal that is so frustrating to concede because of how simple it is to do better from a defensive point of view.

At 1-1, another goal for the visitors would have meant us needing to score twice. Bernd Leno made a fine save to prevent them scoring again, but we still didn’t really get going. Perhaps the nervousness of knowing another goal for them would have left us needing two played a part, but it wasn’t much different from the first half when the scores were level. It really felt like we needed to change something, and if there’s been a criticism of Arteta since he took over it’s that he’s not quite as decisive with his substitutions as he might be.

He tends to wait and see if the players can execute his original gameplan. Lucas Torreira came on for Dani Ceballos and did more or less the same job. There wasn’t anything different in that change, nothing that sparked more from the team. Bellerin came off for Joe Willock late at the end of normal time, a move which saw us go to a back three, and just before the end of the 90 minutes Mustafi came off with what looked like a hamstring strain to be replaced by Sokratis.

New rules mean that you have an extra sub if a game goes into extra-time, and I would have liked to see Gabriel Martinelli sooner than we did. Alexandre Lacazette’s two goals in recent games sparked hopes that the striker’s overall form might also have an upturn, but there’s something really wrong with him at the moment. He missed a glorious second half chance with a stooping header; another real sight of goal saw him blast the ball miles off target; and he looks like a man wearing concrete boots running through treacle at the moment.

I think we can all understand why a manager looks to experience to help him win games, but Lacazette’s form has been sufficiently worrying of late for Arteta to start Eddie Nketiah in the Premier League and I suspect last night will have increased the young man’s chances of playing more often some real good.

Olympiacos had a good chance at end of the first half of extra-time, but blasted it over. Martinelli belatedly replaced Lacazette and injected a bit of energy into our attack. It was his competing for an Ozil cross that saw the ball sit up for Aubameyang, and the acrobatic finish was outstanding to make it 1-1 on the night. The Arsenal celebrations, while understandable, worried me just a little. The game was still very finely poised because of the away goals rule, and I remember thinking perhaps they were a little too effusive because of that.

So then, the crazy final minutes. Xhaka played a pass back to Leno, he just had to take a touch, open his body and play it out to the right hand side where we had men free. Instead, his touch was heavy, he was closed down and conceded a corner – for a team which had been so shaky with set-pieces of late, that was the last thing we needed. We dealt with the initial ball in, but not well enough with the second. Luiz again was culpable, waving his shaggy head at the ball as if he could magic it away with his mind, but I think Pepe might have done more to block the cross. The ball fell perfectly for El Arabi who made it 2-1 on the night in the 119th minute.

If the pit of your stomach fell out at that point, you were not alone, but the celebrations meant there were some minutes of injury time in extra-time for us to somehow find a goal which would see us through. I couldn’t see how we were going to create it, but the chance came nonetheless. Ozil crossed it, one defender headed the ball off another and it fell for Aubameyang just outside the six-yard box. Incredibly he hooked the ball wide of the post, before slumping to knees in disbelief. For a striker of his quality, it was the kind of miss that will give him – and the rest of us – nightmares.

Whether it was deserved or not on the balance of play is a separate thing. As we said about the last game against Everton, sometimes you get a bit of luck which helps you win a game. Others, it just doesn’t go your way, and that moment is one which will resonate for the rest of this season, because the consequences of defeat last night are obvious to everyone.

Even if it was a long-shot, our best path to Champions League football is now gone. What that might mean for the summer, for player recruitment and retention, are questions which will be answered in the fullness of time, but it’s unlikely any of those outcomes are going to be massively positive.

In truth though, and if we’re being realistic, this is not a team that’s ready for the Champions League next season. Arteta has done good work, but he’s working with a squad that is inherently flawed in terms of personnel and in need of a serious, considered rebuild. The absence of European football between now and May could have benefits in the Premier League, we’ll be fitter and fresher without the Thursday nights, but so much depends on what happens next.

I think we were always going to have a setback somewhere along the way. I thought it was more likely going to be dropped points or a defeat in the Premier League that might burst our half-inflated bubble, so this defeat and the manner of it is going to be a real test for Mikel Arteta and his squad.

What will be interesting now is how he lifts them, how he elicits a response from them in what were gut-punching circumstances. Aubameyang’s post-match interview was hard to watch. Kudos to him for fronting up and doing it in the first place, but you could see how much he was hurting. He will feel that responsibility, but he’s someone who has done more than anyone to drag this season to anything approaching respectability and he ought to be reminded of that. The burden of this defeat should not rest on him.

It’s also a night from which Arteta will have learned a lot about his players – in particular some of the senior ones who didn’t produce what they should have. Will that inform this summer? It’s hard not to think so, and I do wonder if we might start to see some changes introduced to what has been a fairly consistent squad selection in recent weeks.

The manager will also be asking questions of himself, I’m sure. Why did his team not get going? Why didn’t half-time bring about anything different? Could he have changed things earlier or done something different with his subs to alter the pattern of the game and the way we played? We all know he’s inexperienced, that was going to be illustrated somewhere along the way, but like the players the key thing now is the reaction and how he and the players deal with disappointment.

He talks a lot about character and how he likes to see players who can deal with making mistakes. He also talks about non-negotiables, and perhaps one or two of them forgot about that last night. So what happens from here will be fascinating to watch. It feels like a moment which could undermine the confidence, but it might also be one which consolidates the team – a sharp reminder there’s still a lot of work to do.

Overall, a disappointing night exacerbated by the lateness of the killer blow, but on the basis of how we played in a second-leg European game at home, we can’t have any real complaints. It should have been better, it wasn’t, and we paid the price.

Next up, Portsmouth in the now much more important than it was before FA Cup.

James and I will be recording an Arsecast Extra but not until after lunch. As ever if you have questions or topics for discussion, send to @gunnerblog and @arseblog on Twitter with the hashtag #arsecastextra – or if you’re on Arseblog Member on Patreon, leave your question in the #arsecast-extra-questions channel on our Discord server.

The podcast will be out for you late afternoon. Until then.

Two strikers, one agent, will they both play against Dundalk?