Home Arseblog, the arsenal blog Bournemouth 1-2 Arsenal: The next generation make their mark 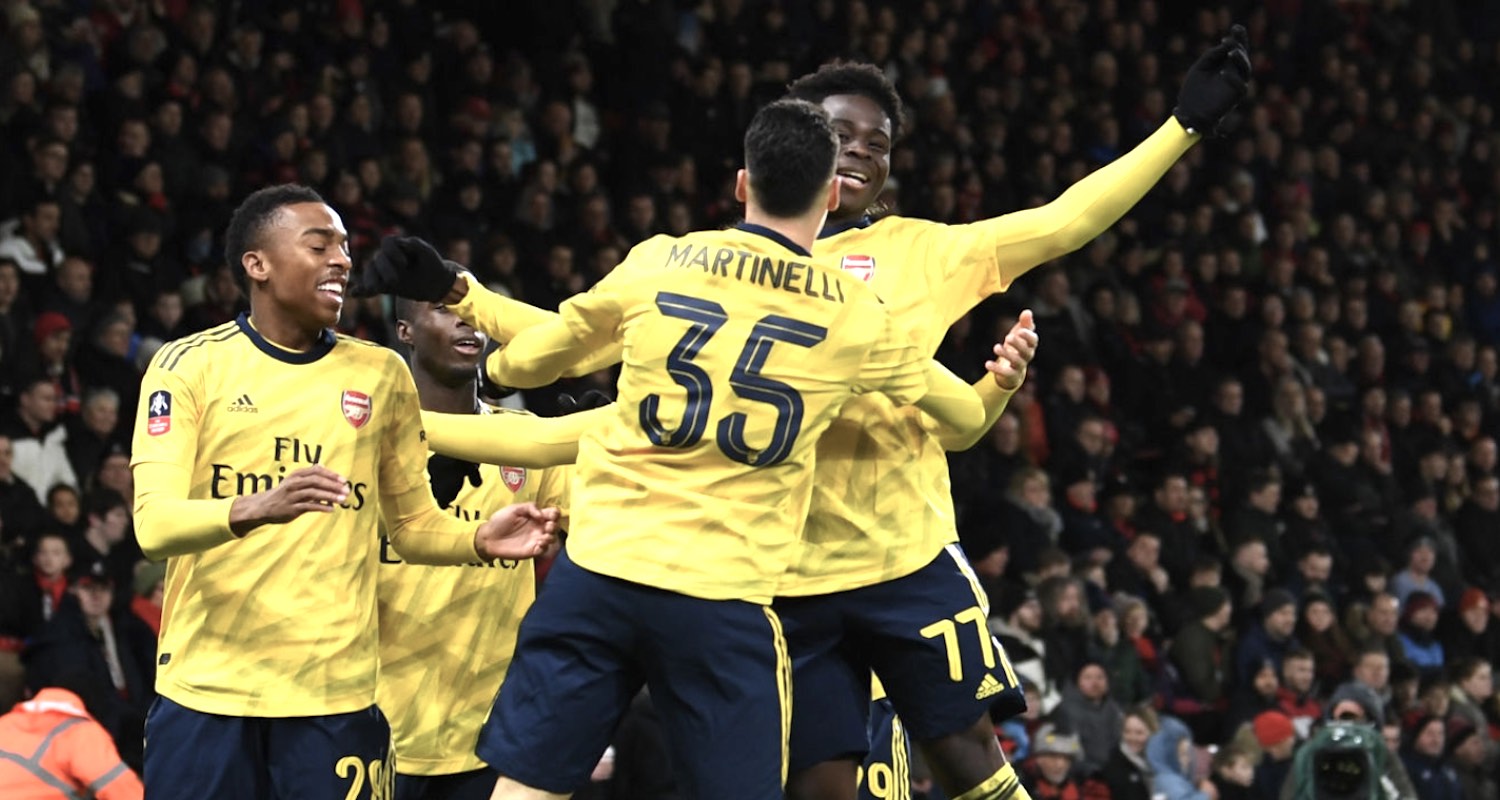 Arsenal are through to the fifth round of the FA Cup after a 2-1 win over Bournemouth last night. It was another game in which one half stood out more than the other, but in that first period there was so much to like from an Arsenal point of view.

Some might say that the Bournemouth performance went some way to explain why they’re currently in the relegation zone, and it would be fair to say they were surprisingly stand-offish and passive. It’s not the first time in recent weeks an opponent has begun a game like that against us though. Whether it’s all down to them or whether they feel that’s the right way to approach a game against Mikel Arteta’s Arsenal is a discussion point for another day, but no doubt Eddie Howe got it wrong last night.

However, the story of the game isn’t what they did badly, but what we did well, and on a night when we started with Bukayo Saka at left-back, Joe Willock in the Ozil role, and Gabriel Martinelli and Eddie Nketiah up front, it’s all about the young Guns. Whatever else you might think about this season, the emergence and development of some of these guys has been a huge positive, and they demonstrated last night why there are high hopes for so many of them.

The first goal was a lovely showcase of what I’m sure people will start calling ‘Arteta-ball’, coupled with drive and incisiveness from the young players. It was a 22 pass move, but Willock sensed the opportunity to make something happen, turning away from his man in midfield, driving forward and playing it to Martinelli. He took a touch, waited for Saka to overlap and the 18 year old took a touch himself before lashing a shot beyond the keeper at the near post and into the roof of the net. That was a hell of a finish.

For a player of his age, who has played out of position for most of his appearances this season, to have contributed what he has is worth mentioning. He has three goals and six assists in 22 appearances, and considering his age, his inexperience and the rest, it’s a great return. That he again looked so assured as a defender having played most of his football as an attacker, speaks even more highly of his talent and potential.

The second goal again involved Willock who picked up a cushioned lay-off from Nketiah after a good ball into him from Mustafi. The midfielder spotted Saka in space on the left and played a perfectly weighted pass into him. Martinelli’s run took Ake – Bournemouth’s best defender – out of the danger area so when the ball came into the middle, Nketiah was there to slot home from close range. Not the most difficult goal he’ll ever score in his life, but he had to be there, and he made no mistake when the chance came.

If there is a complaint, perhaps it’s that we didn’t really try and press home the first half advantage we had. Bournemouth were all over the place, and I suspect Arteta might have liked to see us try and turn the screw a bit. Maybe that’s nit-picking but I get the sense the manager is trying to instill a mindset which is a bit more ruthless and making the most of the periods when you’re on top is part of that.

Not least because the home side were better in the second half, probably after some stern words during the break, and we found it more difficult after that. I don’t think they were overly-threatening, although there were some moments of danger, but it’s true to say we didn’t have anything like the same control. What we did see though was a superb second half from Matteo Guendouzi who is the kind of player who clearly enjoys a bit of adversity.

He’s got an edge to his character which he has to learn to control a bit, but even leaving aside how wound up the Bournemouth fans were getting about him, he demonstrated plenty in terms of his performance on the ball that was positive. He was switched on defensively, and showed some lovely footwork to keep the ball in tight areas. I know we don’t think of him in the same bracket as Saka, Willock etc, but he is still only 20 and looks to me like a player who is beginning to absorb the instructions of a coach who can add some structure to his game.

That’s a good thing because it felt like under Emery he was  given too much licence to be a kind of hyperactive, all-action midfielder and I think he’ll benefit from greater definition to his role. I also bet when he goes home for family visits he insists the neighbours all boo him into the house, he loves it that much.

Then a difficult moment. The injury sustained by Shkodran Mustafi was not pleasant. The way he landed, the horrible angle of his foot – as well as the fact he was stretchered off – suggests some serious damage has been done:

He was replaced by Rob Holding, but it leaves Arsenal with some real thinking to do when it comes to the transfer market. Arteta says that the injury won’t affect the plans – probably because the plan is to bring a centre-half anyway – but there’s no question the need is unquestionable. We have just three senior central defenders now. Two of them are over 30 (Sokratis 31, Luiz 33), and they can’t play every game between now and May. Holding is tentatively finding his way back from injury, so there’s an inherent cautiousness there in terms of his fitness and his form.

If the club don’t do something between now and the close of the window on Friday, they’d be leaving a rookie manager in an extremely difficult position. Yesterday, reports about the potential signing of Pablo Mari were far from positive. The Spaniard returned to Brazil, and when you’ve just arrived in London less than 48 hours previously with a load of luggage, it doesn’t suggest things are going as well as we might have hoped.

There are apparently differences between the two clubs when it comes to the fee, and our ability to pay it now, hence all the talk of us trying to do a loan deal. Whatever the ins and outs of that – and to be honest at this point signing a player on a temporary basis is not necessarily the worst idea – there’s potentially a big, big problem if Mustafi’s injury rules him out for a prolonged period.

All the stoppage time for Mustafi, and few other clatterings, meant we played over ten minutes of injury time. Their goal with about five minutes to go made the last part of the game more nervy than it should have been, but it added just a touch of cup-tie excitement to proceedings which hadn’t really been there before. Overall Arsenal were good value for the win, and the reward is a trip to Portsmouth in Round 5.

Afterwards, Arteta spoke highly of the young players who had such a positive impact on the performance:

They were terrific. Their work rate as well. For me it’s the courage to play, you know, to make big decisions, to not be scared and play safe. That’s the difference with these three kids. Eddie again was terrific and Joe as well. I really like Joe in that position. I think he can be an outstanding player playing there and he showed that tonight.

When you add Martinelli and Guendouzi to the mix – as they fully deserve to be – then there was a lot that we can take from last night. Not everything was great, but more than enough was for that to be the focus this morning. Clearly there are things we can improve on, but we’re potentially seeing a new Arsenal generation emerge and develop in front of our eyes, and that’s really exciting.

James and I will be recording the Arsecast Extra later this afternoon. As ever if you have questions or topics for discussion, send to @gunnerblog and @arseblog on Twitter with the hashtag #arsecastextra – or if you’re on Arseblog Member on Patreon, leave your question in the #arsecast-extra-questions channel on our Discord server.

The podcast will be out in the late afternoon/early evening. Until then.

Pants, Saka, Anfield 89 and the passing of time