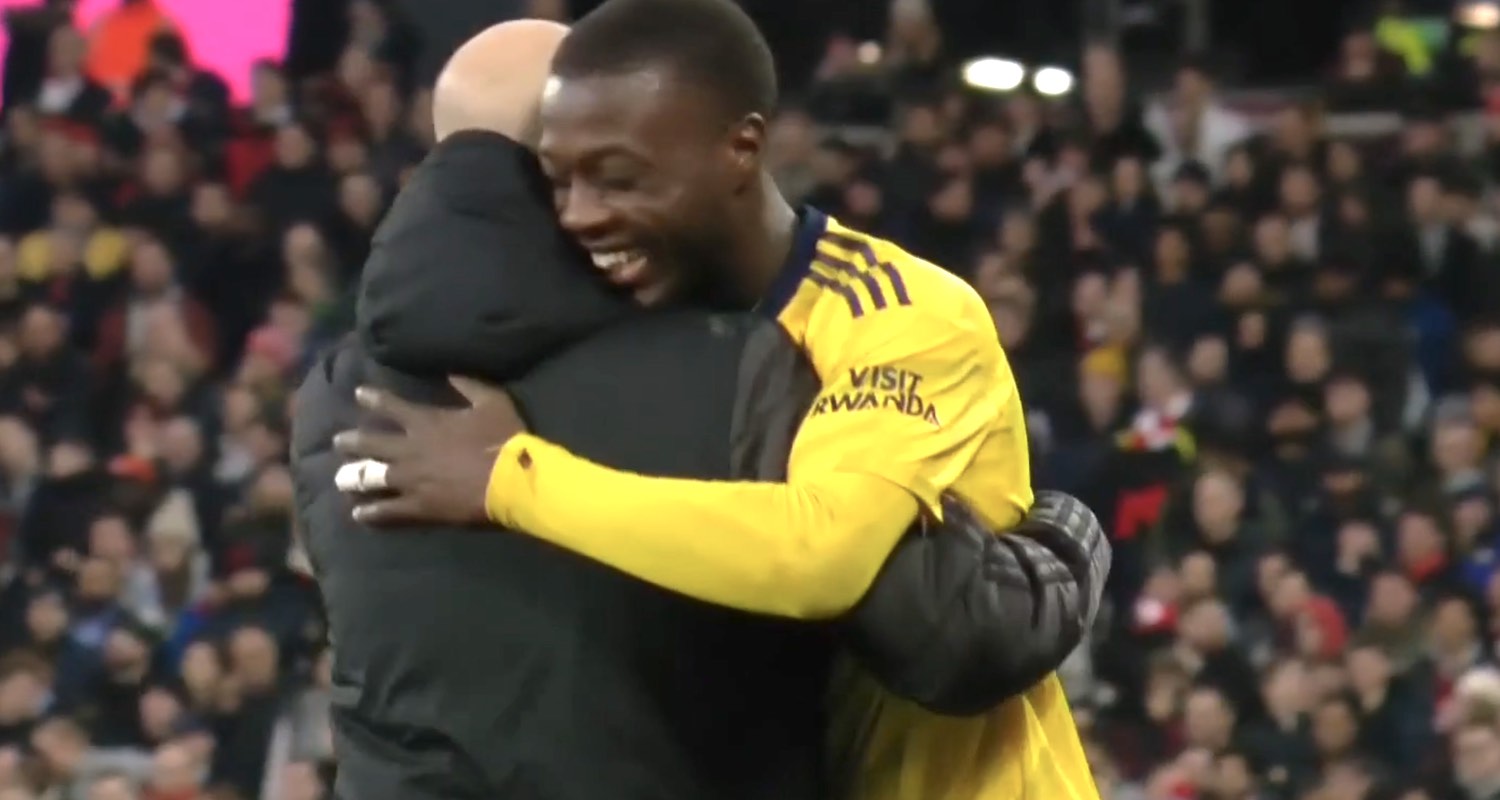 What is this strange sensation? I don’t quite know how to describe it. It’s like … unfailing … not losing … is there an actual word for this in the English language.

Yes, yes I like this ‘winning’, whatever it really is. I feel we should do more of it, more often. The greater the frequency of these ‘wins’, the better. I will inform the people in charge at once, because I think we’ve stumbled across something rather good here.

64 days without winning a Premier League game takes its toll. Not just on us as fans, but on the players themselves. You could see that in the way we played from the very first whistle. Safety first, don’t make a mistake, don’t do anything stupid. Don’t do anything but make the easy, obvious pass. West Ham’s plan was to sit back, let us have the ball and counter when we inevitably did something daft. They’re low on confidence too, so their solution was a deep block and organisation.

It mostly worked for them. I think we had one chance in the first half, a Mesut Ozil header which he couldn’t get over and put over the bar. West Ham didn’t have too many either but they scored when our defensive commitment was found wanting. A corner came in, Kolasinac left his man at the back post so when he had a chance to cross he put in a good ball which Ogbonna really attacked. He attacked it as much as Granit Xhaka ducked out of it. It was not brave defending from the former captain, and I’m not sure Maitland-Niles covered himself in glory either.

The Hammers were – if not inspired – boosted by their goal and we were a bit rattled by it, as you’d expect. We went in behind at the break, and when Sky Sports said it had been eight years since we’d overturned a half-time deficit away from home to come back and win a game, I couldn’t quite believe my ears. That’s an astonishing stat, so with that and our current form, I wasn’t expecting a great deal.

The first 15 minutes of the second half were so very bad. I don’t want to dwell on how poor it was because we won, but it’s worth mentioning in the context of the game that it was pretty diabolical. Nicolas Pepe in particular was really struggling, and I mentioned in the live blog you could understand why he hadn’t been playing much if this was what we were getting. And then …

… Torreira set Kolsainac free down the left, one of the rare forays forward with any pace and intent. He put in an excellent low cross, and there was Gabriel Martinelli to tuck home his 8th goal of the season and his first in the Premier League. Goals change games, as the old adage goes, and boy was that the case in this one.

From a position where we’d been rattled by the West Ham goal, you could see the confidence sap from the Hammers. Pepe – who had been subjected to one brutal challenge in the first half which should have seen Creswell booked at the very least, and another cynical chop which resulted in what ought to have been the defender’s second yellow –  suddenly sparked into life.

Ozil played it to Aubameyang just outside their box, he shifted it to the Ivorian who, from just inside their box, shimmied inside the defender and cracked home a superb shot to make it 2-1. His first goal for the club from open play. How we needed it. How he needed it. Not only that, he turned provider for our third goal in nine minutes, crossing for Aubameyang to volley home and make it 3-1. I was going to say ‘make the game safe’, but there was still plenty of time for us to find a way to mess things up. Obviously that didn’t happen, but it didn’t feel like game over due to our defensive frailties.

It’s hard not to feel like this could be the moment where Pepe finds his feet and kicks on. He’s scored before, but in terms of his progression in the Premier League, his own confidence, and people’s belief in him, this could be pivotal. Time will tell, but how often does a player need a moment or two in a game where he makes a significant contribution to really establish himself at a club and in a new league? I know he had those two free kicks in the Europa League, but he was left out of the side following that, so it’s important he’s allowed build on.

It’s funny what a win does. That glass which has felt permanently half-empty now looks a bit more like it’s half-full. Some optimism returns, and we can only hope that this is something the record signing needed, a breaking down of footballing and psychological barriers, and he can kick on from here.

West Ham huffed and puffed, Xhaka came off, Pepe was knackered and shared smiles and a hug with Freddie when he left the pitch, and because of stoppages there were seven minutes of added time which felt ominous. In the end though, we did what we needed to do, saw out the game, and finally took three points again.

Arsenal is a big football club. We are demanded to win football games and they haven’t won for a long time. I at least have been able to feel or sense the pressure they’ve been under and you can always say ‘well they’re professional football players, they should deal with it’ but it’s been tough for them and you’ve felt it and seen it in games. Today, in the last 30 minutes, that lifted a bit and we started to play some good football and slice them open like I said. We’ve got a lot of things to work on but it felt nice with a win.

I’ve got to say, I really enjoy Freddie’s honesty. He doesn’t sugar coat anything, and his perspective as a former player is something we should pay attention to when he talks about the pressure the players have been under. It’s not to excuse poor performances, but even the harshest critics would have to agree that we’re capable of much more than we’ve produced of late. I don’t think the players haven’t wanted to do well, but when you’re in as deep a rut as we’ve been, it is hard. I don’t think we should underestimate that.

It was unrealistic to expect us to turn up, play well for 90 minutes and win. Last night was just about getting a victory under our belts and going from there. As it happened, I think we had some genuine positives to take away from the night too. Pepe I’ve mentioned, but what about Martinelli scoring on his first Premier League start? The young Brazilian was relatively quiet in general, but plays with such drive that he’s always going to be capable of popping up to do what he did. The importance of that goal at that time can’t be overstated.

Freddie himself made some bold choices. He dropped the under-performing David Luiz and gave Calum Chambers a start at centre-half, a move justified by the performance of the Englishman, I thought. Alexandre Lacazette’s three goals in his last three games didn’t save him from the chop either, and to then flank Aubameyang with an 18 year old and a player who has been so obviously struggling for form and confidence was brave. Maybe he had little choice, but he did it and was rewarded for it.

Let’s not also forget that he lost Hector Bellerin in the warm-up and Kieran Tierney after half an hour. Losing both full backs definitely wasn’t in the plan, and I’m sure it had an impact on a team who must have felt the fates were conspiring against them. However, that spell in the second half when Arsenal burst back into life was enough to win the game, and from there we can slowly try and rebuild our confidence. I also thought the reactions of the players after the final whistle were nice to see, big hugs all round, especially for Freddie.

I don’t think there’s anybody getting carried away, not least because our next Premier League opponent is Man City. They’re going to be out to halt their own little slump in form, and they’re such a good team we could end up the victims of that determination, but look, that’s something we can worry about on Sunday.

For now, let’s consider last night a little step in the right direction and take it from there. We had to win, we won, we move on, continue to work hard and see what happens. We now sit just two points off Man United in 5th, and it’s all very crowded in that upper mid-table space. With the festive fixtures, a lot can change very quickly, so fingers crossed we can find our way from here.

James and I will be recording the Arsecast Extra later this morning – and it’s bound to be a happier podcast than in recent times. As ever if you have questions or topics for discussion, send to @gunnerblog and @arseblog on Twitter with the hashtag #arsecastextra – or if you’re on Arseblog Member on Patreon, leave your question in the #arsecast-extra-questions channel on our Discord server.

Podcast up mid-morning, news throughout the day on Arseblog News. Catch you later my winning chums.