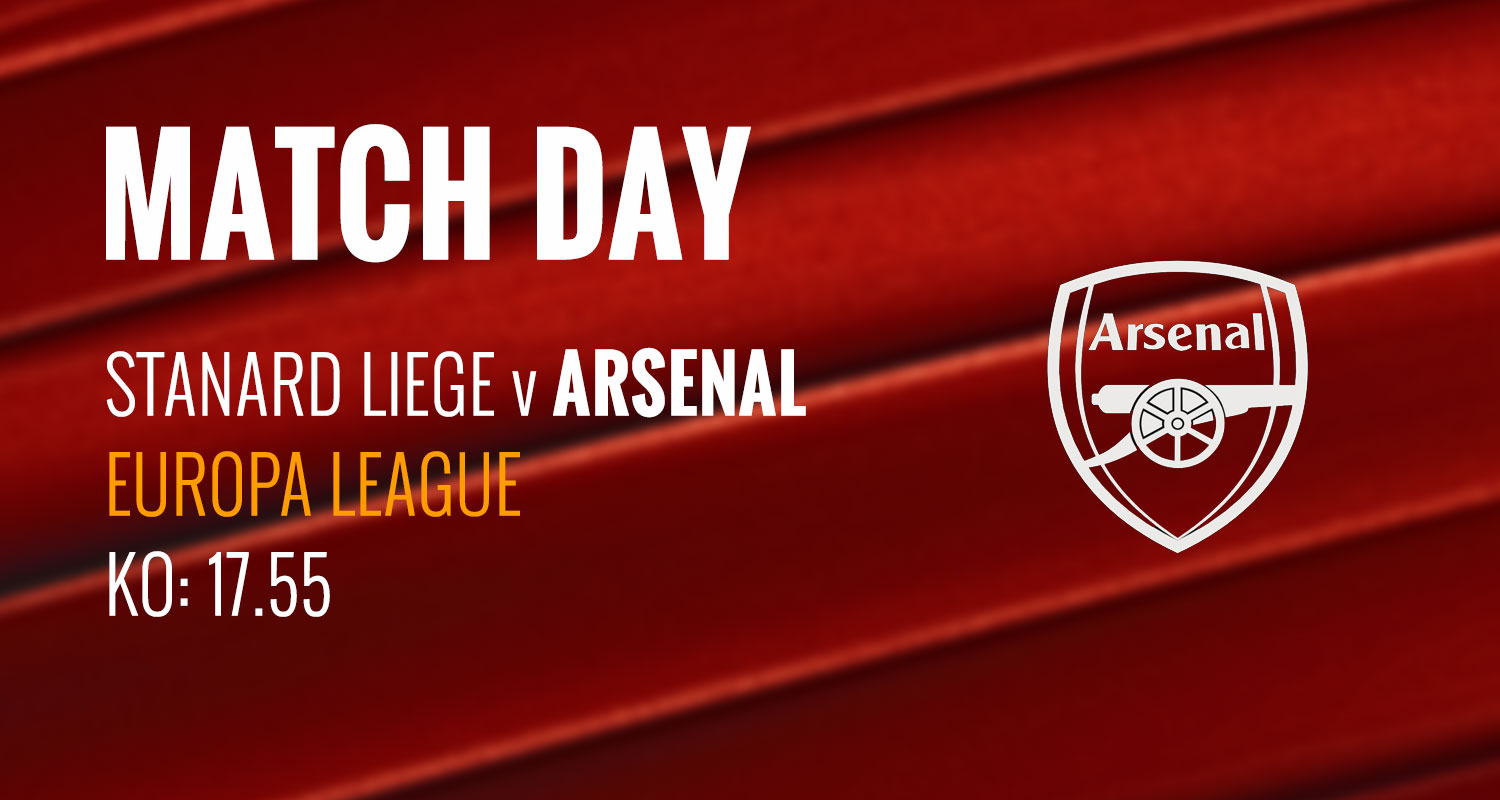 Arsenal are in Belgium this evening for our final Europa League group stage game (note the 17.55 kick off). We take on Standard Liege from a position of some strength, sitting on top of Group F, but it’s not impossible for tonight’s hosts – sitting in third – to go through.

As the UEFA press kit explains:

Arsenal, who have ten points, will be through with a win or draw, and can even afford to lose by up to a four-goal margin irrespective of the outcome of the other final Group F fixture between Frankfurt, who have nine points, and Vitoria, who are out of contention with two. The Gunners beat Standard 4-0 at home and also boast a commanding goal-difference advantage, which would benefit them in the case of a three-way tie should Standard beat them and Frankfurt draw against Vitoria. Only if Frankfurt lose can Standard be certain to go through with a win; regardless of the outcome in Germany the Belgian side will be eliminated if they do not beat Arsenal.

Clear? Good. Tonight’s team is going to be a quite a young one, with Man City on the horizon on Sunday, and because of a clutch of injuries. Freddie is without Kieran Tierney (more on him anon), and also Sead Kolasinac who hasn’t travelled as he’s now our only fit left-back. Granit Xhaka is concussed so misses tonight and Sunday; Hector Bellerin and Dani Ceballos have hamstring problems; Rob Holding’s knee injury sees him two weeks away from a return to training; and Nicolas Pepe has a bruised knee following that disgusting challenge on him in the West Ham game. As well as that, Shkodran Mustafi is suspended for picking up too many bookings in the previous games.

So, that’s a pretty complicated scenario for anyone to have to deal with, and it’s hard to pick the team, particularly from a defensive point of view. Young players like Zech Medley and Robbie Burton have travelled and could well be involved, while there’s a need to keep some players fresh and not risk them ahead Sunday’s match. I suppose the one thing you’d say is that if anyone knows the young players we have at the club, it’s Freddie.

Having worked with many of them last season, he’ll have a good feel for who is ready and who isn’t, and if he does have squeeze some round pegs into square holes, that will make it easier. I’ll make a complete guess at tonight’s line-up, and go with: Martinez, Maitland-Niles, Sokratis, Luiz, Medley, Guendouzi, Willock, Smith Rowe, Saka, Nelson, Lacazette.

Let’s see what happens. That should be enough to do the job, but with so many injuries and outside factors, it’s impossible to predict anything beyond that. As ever we’ll have a live blog for you so you can follow the game, so tune in later on for that.

Now, back to Kieran Tierney and it looks as if the Scotland international will be out for around three months after dislocating his shoulder against West Ham. Obviously it’s a massive blow for him, but also for the team. We wondered why he wasn’t starting more often, and David Ornstein reported an ongoing shoulder problem in the build-up to Monday’s win, so it looks like that was an underlying factor. First and foremost we have to wish him a full and speedy recovery, but this situation now gives Raul and Edu some work to do ahead of the January transfer window.

We know from his comments previously that the Head of Football is not a fan of doing deals mid-season, but in this case I don’t think we’ve got any choice but to dip into the market. Kolasinac himself is someone whose fitness has been patchy, he’s prone to spells out, and without an obvious candidate pushing from the youth system, it feels like we’re going to need a loan at the very least.

Ainsley Maitland-Niles has played there before, but right now he’s needed on the other side as we need cover for Bellerin. It’s possible we can shuffle Chambers over there again, pushing AMN left, but it’s not ideal by any means, and when it comes right down to it, it’s a short-term solution. With the fixture list the way it is at this time of the year – we have another four games after tonight before the window even opens – there’s nothing we can do for now but mix and match with what we’ve got. What we should do though, is start the process of finding that signing as soon as we possibly can. That’s on the people at executive level, who I realise have other issues to deal with right now, but this isn’t something we can just ignore and hope for the best on.

Last season we lost Danny Welbeck, Rob Holding and Hector Bellerin to long-term injuries and did nothing to bolster the squad beyond signing a sickly Denis Suarez who, by all accounts, never fancied it from the day he turned up anyway. That lack of action in the January transfer window came back to bite us in the arse later in the year, and I’m convinced that had we done more/better, we’d have finished the season in better shape than we did. Let’s hope that lessons have been learned from that, and we don’t make the same mistake again in the wake of the Tierney injury.

Finally, for those interested in the results of yesterday’s poll over the Vieira/Arteta thing, the results are:

Of course it’s purely unscientific, and won’t have any influence on anything at all, but it’s an interesting outcome. I sort of expected Arteta to come out on top, but not by that kind of margin.

For some extra reading this morning, here’s Tim’s column on the exciting Gabriel Martinelli.

Right, let’s leave it there, catch you later for the match and the live blog. Join me tomorrow for more here, and a brand new Arsecast. Until then.