Home Arseblog, the arsenal blog Liverpool 5-5 Arsenal (5-4 on pens): Well, that was nuts 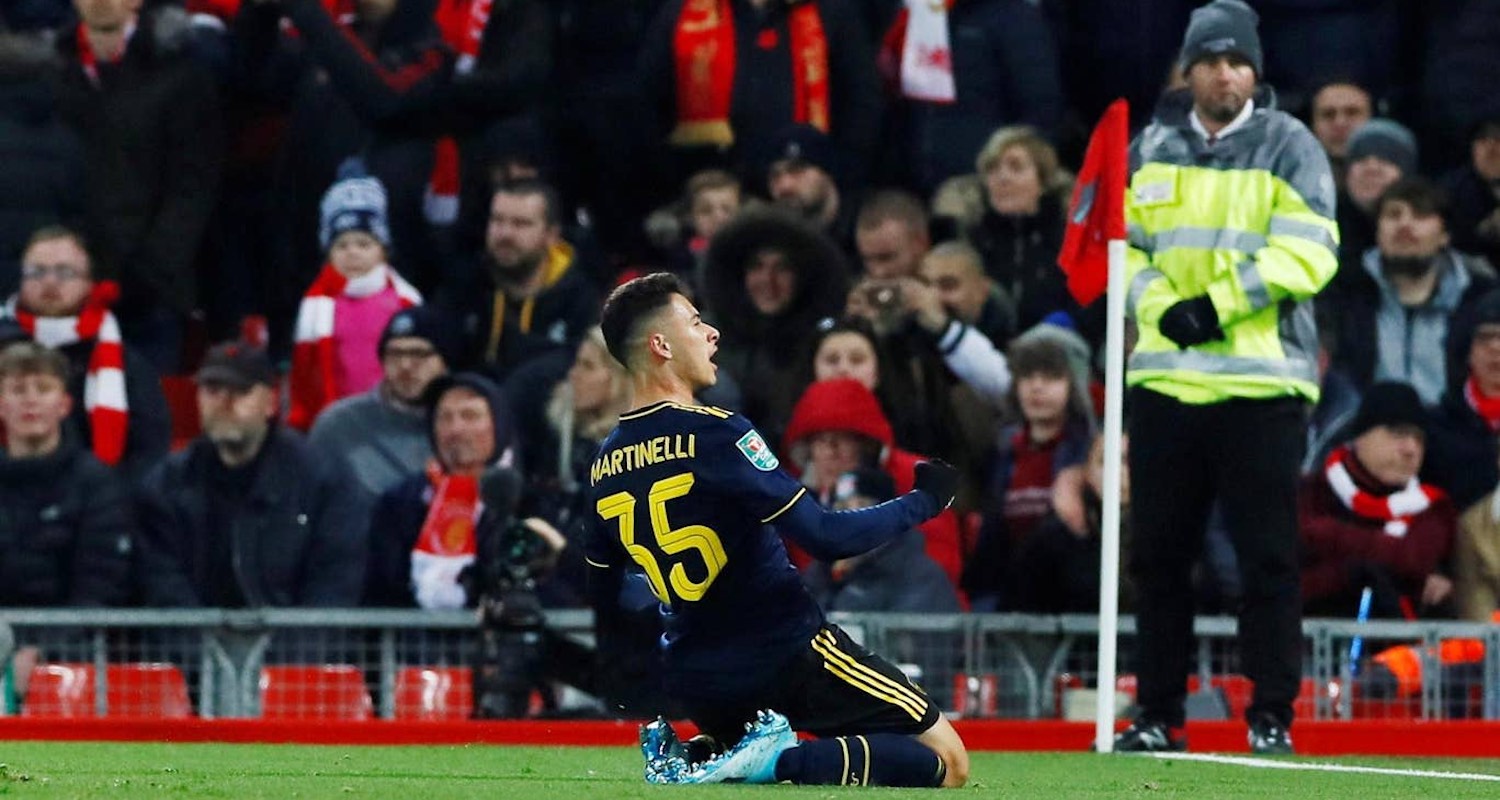 If nothing else, this football club of ours makes you feel stuff. This morning I’m sitting here after a game in which we scored five times at Anfield and somehow didn’t win, thinking about some of the real positives that we saw last night, not being overly concerned that we’re out of the Carabao Cup, but also trying to reconcile the awfulness of some of the overall performance. It’s a surreal, heady cocktail of emotion and to be honest I just want some more coffee.

As I said yesterday, if Unai Emery played his ‘cup team’ then we could compartmentalise this game, regardless of what happened. That’s still the case. Being frank, I think we can do without this competition, but even then there’s a part of me that’s a bit sad because two of the most enjoyable nights we’ve had this season have come in the League Cup.

Last night’s game was a ridiculous slug fest, two teams just taking swings at each other – pulling out moments of high drama, sheer brilliance at times, and from an Arsenal perspective it was all built on our trademark platform of innate self-destruction. It was a classic ‘great game for the neutral’, and even last night I have to say I enjoyed it because of the lack of real pressure. If it had been a Premier League game, I’d definitely be feeling differently.

The scoring began early, and if you need a goal to set the tone, then that’s what we got. Shkodran Mustafi did not need to slide in to the near post to make a challenge, but Shkodran Mustafi likes sliding so he slid. He just likes to slide. You can’t ever stop that. It’s in his nature. I bet he was a slidey little fella when he was a child. Sliding here and there as his mother shouted ‘WILL YOU EVER STOP SLIDING YA BOLLIX?!’. So, when the opportunity presented itself, he slid with all his might, but sadly missed the ball which cannoned off his knee and into the back of the Arsenal net. Liverpool one, Slidey McSlideface nil.

To be fair though, we responded really well. Ok, Lucas Torreira might have been a bit offside for the equaliser, but it came after great work from Gabriel Martinelli who went on to score the second a few minutes later after a smart, quick free kick and good work from Ainsley Maitland-Niles. Then some young Liverpool lad who whose hair looks like a failed audition for the B52s made a mistake, Ozil was there to nick the ball to Saka who crossed and Martinelli put away his second of the game to make it 3-1.

Can I just talk about the young Brazilian here for a moment? Whoever scouted him, whoever found him, I will buy you whatever sandwich you like from whatever sandwich place you like. That’s how excited I am by him. The goals are one thing – one very excellent, sexy thing – and with 7 to his name this season he’s just one behind our top scorer Pierre-Emerick Aubameyang. But the way he plays is sensational. He presses like Alexis Sanchez after a nose-bag of whizz, he’s strong, determined, dangerous, hard-working, technically excellent and tactically aware (no small feat given the issues this team has) and given what he’s done he has well and truly played his way into contention for our Premier League team. Even the penalty he scored in the shoot-out was emphatic. This kid does not mess around and I absolutely love it.

So, 3-1, quite the turnaround, and Arsenal with a two goal lead, what could go wrong? Well, B52-hair took a tumble in the box after a Martinelli challenge, the referee bought it and pointed to the spot. Some said it was justice after Torreira’s offside goal, but life doesn’t work like that in my mind, and it was a stinky dive. James Milner stepped up, scored and it was 3-2 at the break. What a half.

In the second, we scored early – Maitland-Niles capitalising on a slack back-pass from Milner to nick the ball beyond the keeper. It looked as the touch had taken the ball too far wide, but in came Ozil, back-heeled it beautifully to AMN who tucked it away to make it 4-2. A delicious goal and the German’s contribution was the kind of thing only he could think of and pull off.

Arsenal had a two goal lead again, what could go wrong? Well, Maitland-Niles got caught dallying on a bouncing ball near our box, and former Gunner Alex Oxlade-Chamberlain absolutely leathered one into the net. 3-4. It had to happen, he was getting pantomime boos from the away fans all night, and a goal against his former club felt sort of inevitable. After all, that’s what we do. Then Origi’s turn was too sharp for Holding on the edge of the box and his shot too powerful for Martinez, 4-4.

It prompted Emery into a change, taking off the influential Ozil to put his very own footballing safety blanket, Matteo Guendouzi. Don’t get me wrong, I’m a fan of the young Frenchman but it did change the complexion of the game. As for taking Mesut off, he explains it here – suggesting that after not playing for so long he was tired, and that the change was pre-planned. Perhaps it means that Ozil will play against Wolves on Saturday, which would make what the manager did more understandable, but at the time and in the context of the game it felt a bit counter-intuitive.

Dani Ceballos also came on to buzz around, but it was Joe Willock who made the next significant contribution by doing an uncanny impression of Patrick Vieira’s goal against Newcastle some years ago. Striding through midfield he let fly a curling belter – also known as a Burler (not a Burley, that’s an annoying pundit) – into the top corner. What a hit from the young man. 4-5, and the quarter-finals were in sight.

Closer. Closer. Even closer. Just seconds away from qualifying, when deep into injury time they got a cross in from their right, Mustafi lost Origi – which is kind of like Andre the Giant’s mum losing him in a department store … how do you even do that? He’s massive – and the Belgian shinned home an equaliser to make it 5-5. I mean, of course he did. Why wouldn’t he? Why would Arsenal choose this moment of all moments to defend properly and win the game?! We are so on brand it hurts.

So, we went to penalties, scored some good ones but Ceballos missed and 18 year old Curtis Jones stepped up to send Liverpool through on what was a truly bonkers night of football. One which definitely had positives from an Arsenal point of view. Hector Bellerin got a strong 90 minutes under his belt; goals for Willock and Maitland-Niles will do them good after a difficult couple of weeks; Ozil reminded people – not least Emery – that there’s some life in the old dog yet; and I’ve already talked about Martinelli but let’s just say again that this lad is a bit special and it’s great to watch him play.

Arsenal’s exit from the Carabao Cup really doesn’t drive a stake through my footballing heart the way dropped points in the Premier League do, so I’m not going to even try and pretend to be outraged or overly upset about what happened. However, when you see your team score five times and not win; when you see your team twice throw away a two goal having seen us just do exactly that in the last league game; and when you see your team fail to do the basics right at the death to concede another goal you shouldn’t; it all plays into the concerns which remain part of the bigger picture at Arsenal.

No doubt lots of you saw this thread during the week, an uncannily prescient look at what Unai Emery might bring to Arsenal (check the date), and once again we’ve managed to snatch defeat from the jaws of victory. That’s what he does, that’s what we do, that’s what we are at this moment in time.

Of course Saturday is far more important, we desperately needs those Premier League points, and going out the League Cup is not what will define our season by any stretch of the imagination. Nevertheless, it’s all part of the wider malaise, and last night won’t have done much to ease the pressure on Emery despite some of the real positives I mentioned.

Right, we’ll have more reaction throughout the day on Arseblog News. Join me here tomorrow with more bloggy goodness and, of course, a brand new Arsecast. Until then, take it easy.