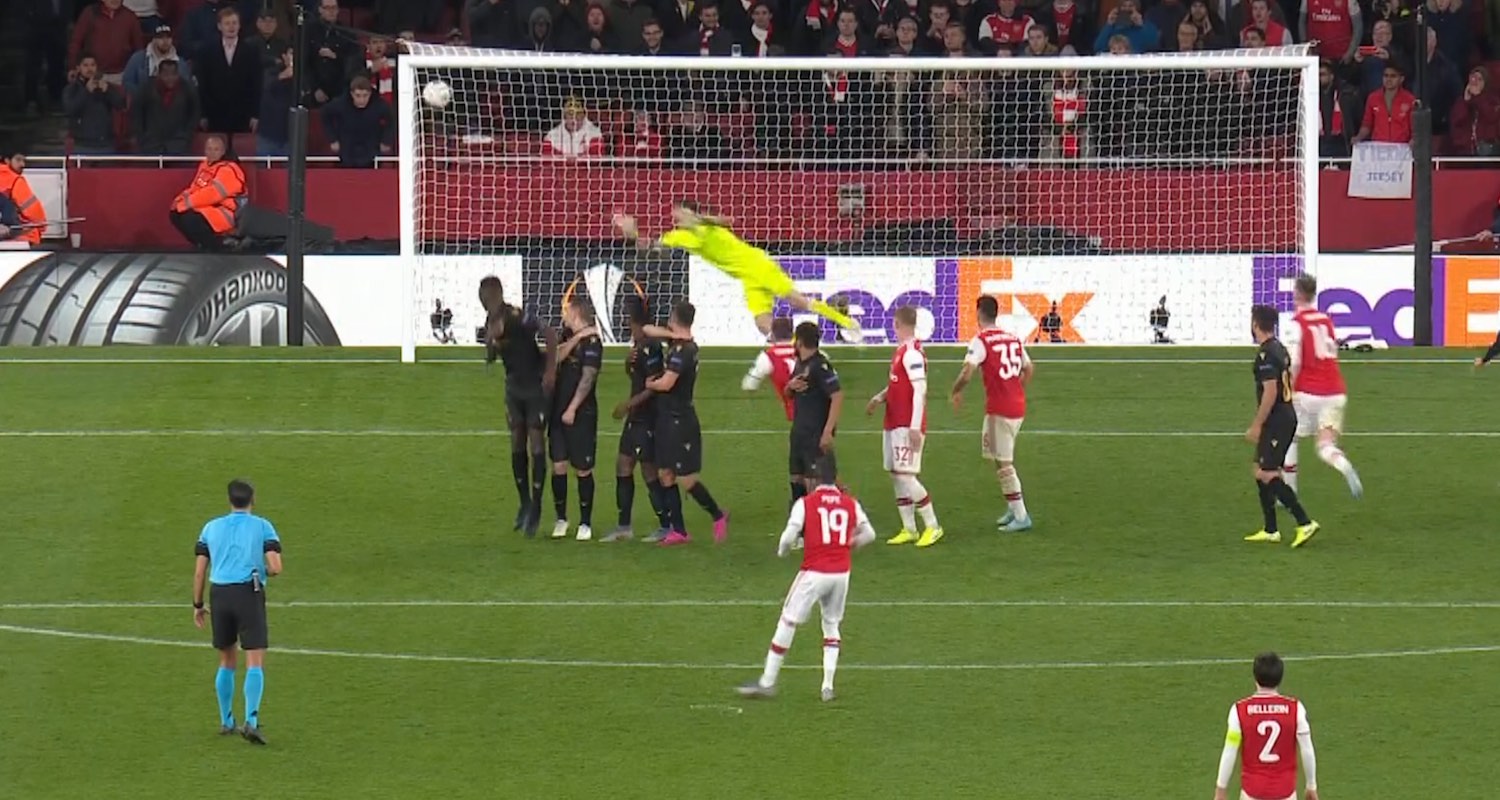 We were 2-1 down to a team who had previously not scored in the Europa League so far this season, and we looked a bit all over the place. We’d made two changes at half-time because we were so poor, bringing on Matteo Guendouzi and Dani Ceballos for Joe Willock and Ainsley Maitland-Niles, both of whom had struggled in the first half.

The visitors, as late as the 77th minute had taken more shots than us (13 to our 10, and the final tally was 17 to 15 in their favour despite them having just 32% possession), and it looked as if we were going to suffer a second successive defeat to a team that, with all due respect, we really should be beating.

Nicolas Pepe was Unai Emery’s final throw of the dice. Alexandre Lacazette started the game up front, but despite some occasional flashes looked like a man who hasn’t really played for two months. For him this will have been a fitness exercise, and the paucity of our performance and the desperation we showed was evidenced in his daft theatrics midway through the second half. He’ll look back on that and have some regrets I think. It wasn’t what you’d expect from him, but I think he knew we needed something beyond the norm to stand a chance. If it had to be a red card for Vitoria, then so be it.

As it turned out, an Arsenal player provided that something special, and it turned out to be Lacazette’s replacement, Pepe. The Ivorian was introduced in the 75th minute with the team in real need of something. His struggles have been well documented, and earlier in the week Emery rightly called for some patience. We’re barely a couple of months into his time at a new club, it’s common sense to think it might take him time to adapt.

Yet after that miss against Sheffield United, it was his failure to hit the target that defined him … until last night. In the 79th minute, Lucas Torreira – who had been used in a role which seemed almost designed to be an impediment to what he can really do – won a free kick deep in the Vitoria half. Pepe had a little chat with Guendouzi, put the ball down, and curled a superb free kick over the wall and into the far bottom corner of the net. He was helped a bit by the keeper making that fatal mistake of taking a step in the wrong direction at exactly the wrong time, but let’s take too much away from the goalscorer.

In typical Arsenal under Unai Emery fashion, we immediately presented a good chance to the opposition after scoring. Don’t ask me why we do this so consistently. Like water is wet and grass is green, this is just what we do. Davidson shot just wide, Martinez probably had it covered, but nevertheless it’s irksome that we allow this to happen time and time again.

Pepe almost provided a winning assist but the keeper was equal to Holding’s header, and as the game went into injury time the drive and determination of Guendouzi won us a free kick just outside the D. There was never any question about who was going to take it, and with almost the last kick of the game, Pepe stuck a magnificent free kick into the top corner to win it. This time there was nothing but the finish, there isn’t a keeper out there who’d stop that one, and the £72m man well and truly announced himself as an Arsenal player last night.

Yes, it was the Europa League. Yes, it was a rescue act, saving our bacon against a team that we shouldn’t have struggled so badly against, but sometimes a player needs that moment, that game, where he shrugs off the heavy weight of expectation + price tag + form, and produces something. Ahead of a much more important game against Crystal Palace at the weekend, it’s hard to overstate the importance of that cameo for Pepe, and hopefully from here he can really kick on in red and white. Also, who was the last player to score two free kicks in one game for us? Answers on a postcard.

Afterwards, Emery had words of praise for the match-winner, saying:

Pepe is a very good player and we believe in him, totally. The way he’s going, sometimes he feels better, sometimes it’s with more difficulty on the pitch. It depends on the opponent. He’s improving and tonight those two goals are really important for us first, and then secondly for him. He’s continuing the adaptation in his process and as soon as he can adapt, that’s better for us.

So, on the night what Pepe did was the big, big positive. He got the team and Emery out of Europa League jail, and I have to say it was curious to see the reaction of the manager to the free kick that won it. Usually he prowls around the touchline, and greets our goals effusively, but this time he sat steadfast in his seat in the dugout, expressionless as the players and fans celebrated the winner. Good sense not to get too emotional in the context of the performance, or something else?

Pepe wasn’t the only positive in fairness. Another goal for Gabriel Martinelli, and another header too, was further indication of his talent and his desire and work-rate is admirable. That his goal came from a superb Kieran Tierney cross was good to see also, even if the left-back didn’t cover himself in glory for their first goal. Himself and Bellerin were good, I thought, so there were things we can take from this game if your glass is of the half-full variety.

On the other hand, there were elements which remain far from convincing. This wasn’t a polished performance by any means, continuing the theme from Monday night (and the season in general). While this Europa League outing provided excitement because of how the game finished, the overall display didn’t match that of Standard Liege, for example. It was, in some ways, reminiscent of the Villa game where late free kick drama was enough for us to take three points, and I suppose for many that will be the bottom line.

It does lend itself to more discussion though, so join myself and James for an Arsecast Extra later on in which we’ll do exactly that. We’ll chat about the game, the good and the bad, and the exclusion once again of Mesut Ozil. At this point it probably shouldn’t be a story, or at least not one with much more to say from either angle, but the player’s social media contributions in the last couple of days have ensured this unhealthy situation is something we’ll need to address.

As ever if you have questions or topics for discussion, send to @gunnerblog and @arseblog on Twitter with the hashtag #arsecastextra – or if you’re on Arseblog Member on Patreon, leave your question in the #arsecast-extra-questions channel on our Discord server.

We’ll have the podcast available before lunchtime, until then.