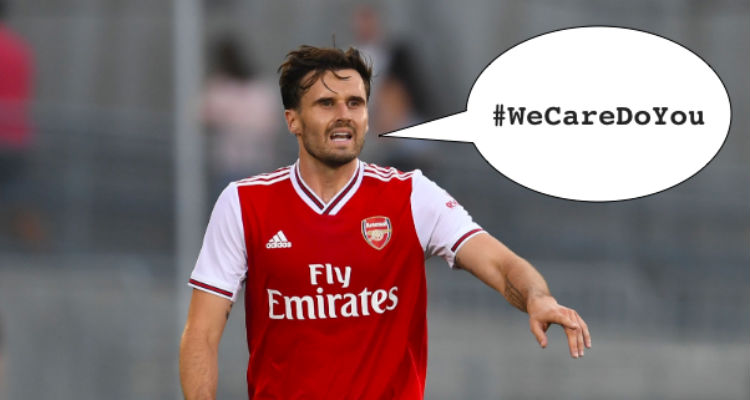 I’m going to let you in on a little secret. When Blogs asks me to help out on here, I usually try and write the whole post before going to bed and then I keep my fingers crossed that the Emirates doesn’t burn down, both literally and metaphorically. It feels a bit like I’m cheating, but this tried and tested formula means I can get a decent night’s sleep and still publish something half-readable before going to work. When I get to my desk, I send the mailing list, push the post out on social media and then I get on with my day. Simple.

On this occasion reader, this has not been possible. With Arsenal playing at 2 am and me due on a video shoot on the other side of London at 8 am, I’ve had to set an alarm for 5:15 am. It is currently 5:32 am. The foxes that have spent the night fucking outside my window have only just stopped hollering, the sun is still low in the sky and I need a coffee.

On the other side of the world, the rip-roaring Gunners have just won 3-0 against Stan’s other football team, the Colorado Rapids, at Sporting Dick’s Good Park. I think that’s what it’s called. Registering a big ‘W’ in our first game of pre-season; finally, something positive for us to get our teeth into.

I’m going to take a look at what happened. And then I’ll get back to you…

Right.  we largely played the kids, which is not very surprising at this stage of the summer.

After a quick review of the highlights, I can tell you that James Olayinka scored the goal of the game. Stealing a loose pass in midfield on 29 minutes, the 18-year-old midfielder darted forward, opened up his body and found the top right corner with a curling effort from 20-yards. It reminds me of the goal Emile Smith Rowe scored against Atletico Madrid this time last year. Not a bad way to announce yourself on the big stage.

Earlier Bukaya Saka, apparently the star of the game, had put the Gunners ahead with a deft dink over the keeper and to round things off Gabriel Martinelli, who’d earlier hit the post, grabbed a goal on his debut. The Brazilian, wearing the number 35 shirt, chested the ball in from close range to finish off a fantastic move down the left wing just past the hour mark. That’ll do his confidence a world of good.

Eddie Nketiah led the line and Joe Willock got minutes off the bench, Carl Jenkinson, Calum Chambers, Shkodran Mustafi and Sead Kolasinac all had game time and Rapids fans were treated to 12 minutes of our big guns with Mesut Ozil, Pierre-Emerick Aubameyang and Alex Lacazette all making fleeting appearances. It looks as though we held back Smith Rowe and Reiss Nelson.

So a fun experience for the young members of the touring squad, valuable minutes on the road to fitness for others and a goal for our new boy. If there was a downside, it was the decision to sport yellow names and numbers on our lovely new home kit. Yellow on red? Someone needs to get sacked. It would never have happened during Vic Akers’ day.

In his post-game press conference, Unai Emery was asked about Laurent Koscielny’s absence. He admitted he wanted his captain to travel to the US and that the issue remains unresolved.

“The club and him need to speak,” the Spaniard said. “They are speaking about his situation. I cannot say more than that. I spoke with him before he came here and he decided to stay there.

“We spoke with a good spirit for both the team and him but this is his decision, only his decision. He’s speaking only with the club.

“Really I cannot say more about that. For me now it’s clear we need to keep moving ahead.

“We’re here with the players who have the spirit to create the new way. Laurent Koscielny for me, now, I’m waiting on his decision with the club.”

There was also a quick word on potential new signings: “The club is working. We are speaking every day with the club and Edu. I prefer to work with patience and calm and take the best decision.

“We have very good players, very young good players. We need someone to help us. The club is working on that.

“We prefer to take the best decision with patience. If we need to wait more time for this reason I prefer to do that.”

All pretty standard stuff from a man who tends not to give much away when he’s faced with a room full of microphones and notepads.

Arsenal will hop on a flight back to Los Angeles to prepare for our next friendly on Thursday against old pals Bayern Munich at the Dignity Health Sports Park. Then the games come thick and fast.

As you’re probably aware by now, the build-up to this morning/evening’s match was dominated by a supporter-led statement, a trending hashtag (#WeCareDoYou) and a much-signed petition that soon became the talk of sports desks up and down the country.

From Arseblog to the Arsenal Supporters’ Trust, the Gooner to Gunners Town, Red Action to Le Grove, familiar faces representing fan groups, fanzines, websites and blogs united to express clear indignation at the way Arsenal Football Club is being run by Stan Kroenke.

The statement covers a lot of ground; the marginalisation of fans, a lack of accountability at the top, a need for young blood on the board, failures in the transfer market, mismanaged player contracts, the atmosphere at home games and the impending threat of a European super league.

You don’t have to agree with every word, but the overall picture it paints is something that people will recognise. We Arsenal supporters are unhappy. On the pitch and off the pitch, things are not right. We want the club to be competitive at the top of the game and for that to happen, we need change.

The reaction to the statement has been amazing, I daresay beyond the expectations of those who put it together. Pretty much every paper in England has run a story and nearly all of them crank the pressure up on Stan. That’s despite the statement’s conciliatory tone. What’s more, it really has united Arsenal fans with more than 78,000 signing the petition in support of its sentiment. See, it’s not just amazing retro Adidas kits that can get us on the same page!

Will words alone make any difference? I suspect not. It’s hard to imagine Stan Kroenke, a man who left the city of St. Louis with a $129 million tax bill, losing any sleep over this. Indeed, so far, there has been no reaction from the club.

For more than a decade, Arsene Wenger acted as a lightning rod for many of the club’s woes with Ivan Gazidis only occasionally popping his head around the door to see what all the noise was about. Anyone who watches Unai Emery’s press conferences will know, and this is no criticism of him per se, that he’ll shield himself from any off-the-pitch matters and direct the press to ask questions of people who aren’t in the room.

Today, those people are Vinai Venkatesham and Raul Sanllehi; the ball is very much in their court. How are you going to play this situation, chaps? If the two blue ticks are showing in your Whatsapp group with Josh and Stan, it means they’ve read your messages. We need you to get answers. Keep pushing.

Blogs and James have a good chat about the statement in yesterday’s Arsecast Extra. Well worth 90 minutes of your day if you’ve not yet listened.

Right, the clock is ticking. I better go. Catch you tomorrow.