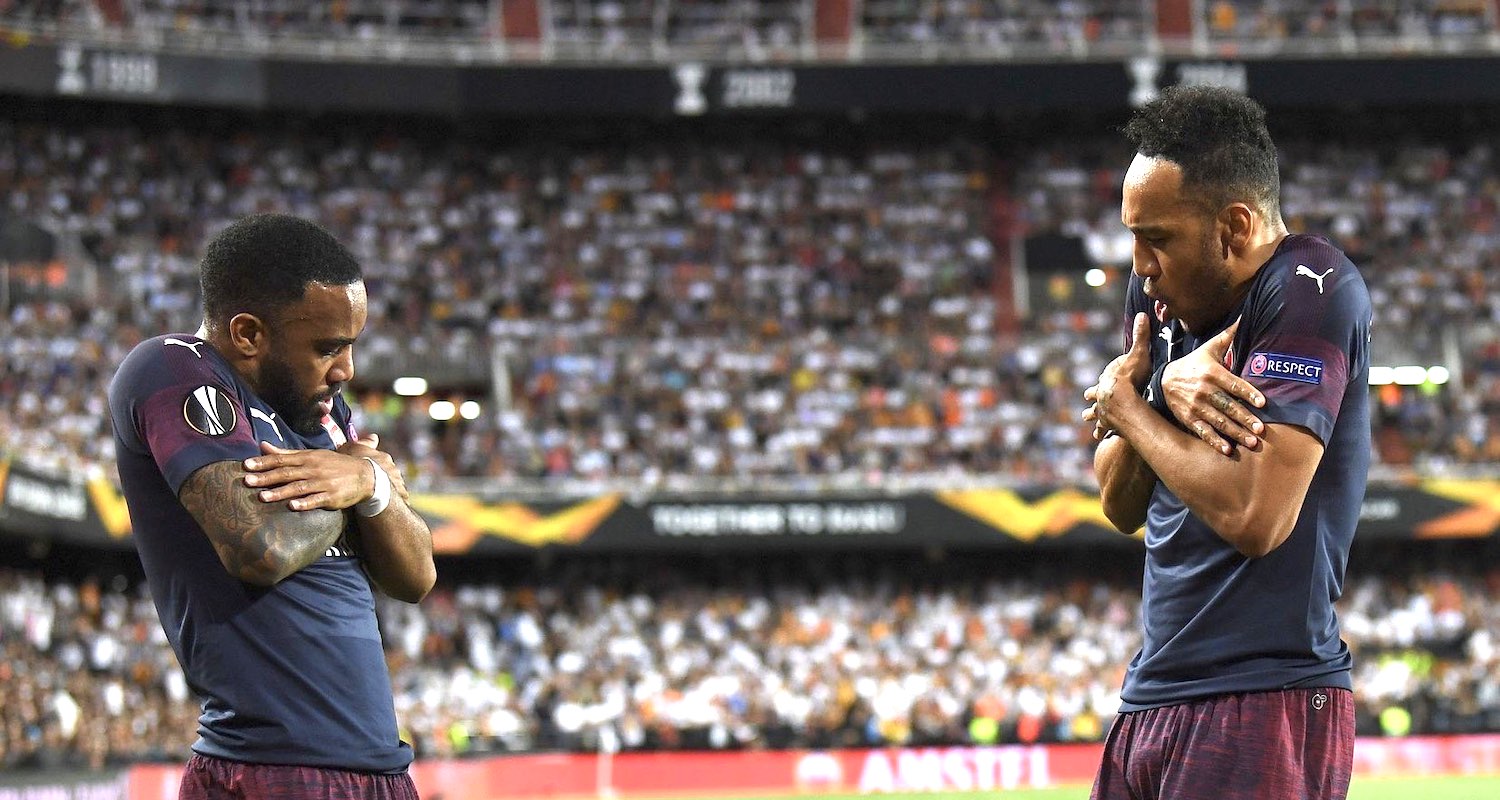 Hands up who was worried when Kevin Gameiro put Valencia into an early lead? Blimey, that’s a lot of hands. Hands up who feared we might let this slip when the home side dominated the game after that goal, and had chances to score a second? So many hands, so very many hands.

Hands up who settled down a bit when Pierre-Emerick Aubameyang’s superb equaliser flew into the bottom corner after his striker partner Alexandre Lacazette won a header he really had no business winning from a long punt downfield? Hands, hands everywhere, and it’s very difficult to overstate the importance of that goal. Not simply because it meant we had an away goal under our belts, but the timing of it – when Valencia were well and truly on top – pretty much knocked the stuffing out of them.

They’d obviously executed their game plan very well. Score early, check. Put a side that has been dodgy as anything away from home under considerable pressure, check. The next thing was another goal which would have seen the complexion of the tie change completely as it would have meant them going through on away goals as it stood. Instead, we sucker punched them. A route-one kick right in their sunny bollocks, and I don’t think they were the same afterwards.

Their start had been so bright, finding space particularly down the left where Ainsley Maitland-Niles was given no help whatsoever until Aubameyang took it upon himself to give the young man a hand. I’m sure they’ll have regrets that they didn’t score the second, and when you’re facing a team with two strikers as good as ours, and as in the mood as ours, chances are you’re going to pay the price.

Over the course of the two legs, Aubameyang and Lacazette scored seven goals and nabbed two assists between them. Last week at the Emirates, when our form was in the toilet, they were the driving force for victory, and last night was much the same. Unai Emery picked the team I thought he’d pick, but it was a result borne far more out of the individual desire and quality of our two men up front than a tactical masterclass.

Take the second goal. Aubameyang tried to make something happen by picking up a loose ball and charging down the right hand side, but was well tackled by a Valencia defender. He didn’t give up though, nicking the ball back to feed Lucas Torreira who fizzed a ball into the box for Lacazette. With his back to goal the French international held off a couple of defenders and on the turn finished with aplomb to make it 2-1. That meant that Valencia had to score four goals in normal time to go through. Another decisive contribution at a key moment.

Not even this Arsenal could let that kind of lead slip, but wait, Gameiro scores again and scenarios which have no business doing the rounds in your over-burdened brain flit behind your eyes. We couldn’t. Of course not. OF COURSE NOT. But, you know, if they score again …

Then Maitland-Niles picked the ball up on the right, destroyed his marker with a quick-footed how-do-you-do and fired in a cross towards the near post. Aubameyang, who had been hanging back, timed his run to perfection leaving their two centre-halves for dust and he stabbed home to make it 3-2 on the night and 6-3 on aggregate. Emery made some changes; Mustafi for the injured Kolasinac and Guendouzi for Torreira, having already sent on Mkhitaryan for Ozil who seemed wound up and SSSHHHd the home fans who might have been been giving him some mild stick. Who knows?

Valencia knew the jig was up. Cameras cut to Francis Coquelin and Gabriel wearing blank expressions but as Arsenal fans we’re used to that look of desperate pain behind the eyes. We’ve seen it so many times in the past. The orange seats of the Mestalla became more and more visible as home fans said ‘Sod this, it’s a beautiful night. I’ll head down to Plaza de la Virgen to listen to an old crusty play a home-made flute hewn from a goat’s femur rather than watch any more of this’.

It meant they missed another goal. Mkhitaryan providing the pass the Aubameyang’s movement deserved, and the striker completed his first ever Arsenal hat-trick with a shot that crackled beyond the keeper like rocket and into the roof of the net. It was no less than he deserved. In truth a ten out of ten performance is a rarity in football, but that’s exactly what we got from him last night.

I don’t think we even need to talk too much about his partnership with Lacazette. We certainly don’t need to hear anyone them ask how much they like playing together because all the evidence you need was on the pitch in these two games against Valencia. ‘Unbelievable‘ was how the Frenchman described his mate, and he’s not wrong. I see a lot of stuff these days about whether or not we should sell one or other of them to help finance a rebuild and every time I see it I think ‘Are you out of your ever-loving mind?!’

There’s so much to fix with this team, we can all see where the problems lie, so why on earth would you break up the thing that is probably our key strength? Without these two we wouldn’t be in the Europa League final at the end of this month, and we need to harness their quality, not trade it in for cash. Get some new players who can provide for them more reliably and consistently than the ones we have right now, and that will make us better.

It won’t fix our defence, it might make our dysfunctional midfield better because that’s where some of that service will come from, but don’t even consider the idea that one of these two players could be sacrificed for the sake of reinvestment. We need to keep the things about this team which are good, and these two are very, very good. They love each other, they have quality and character, they can score and create, and I shudder to think where we’d be without them.

Together they have driven this team through a torment of terrible domestic form and into a European final. They had a little more support last night than last week, there were pleasing elements to our game at times, but three goals for Lacazette and four for Aubameyang over the course of the two legs tells you everything about their importance. We’re lucky to have them, embrace them both – you don’t have to choose between them – and let’s hope they have one more big push left in them this season because our chances of lifting the trophy in Baku largely depend on them.

Aside from them, and after what has been a really difficult and disheartening period, it feels good to win again and to have this game at the end of May which will, in many ways, define the story of this season. If we win it, it’ll plaster over some of what happened in the last few weeks when we let the top four slip so badly. We’ll have a European trophy in our cabinet for the first time in 25 years, and Champions League football next season. I don’t buy into the idea that somehow we’re not ready for that. The longer you spend outside, the more difficult it is to get back into it, and the financial implications are huge.

If we win the final, we’ll earn something in the region of €25m for our European adventures. Not too shabby, but it’s 25% of what the winners of the Champions League receive, and for a club that’s self-sustaining and can only spend what it generates, the importance of that increased revenue should be blindingly obvious to everyone.

You don’t need me to tell you what the implications of losing the final are, and to be honest there’s no need to go into that this morning. What we’ve done is given ourselves a shot at genuine success this season. A tangible reward is at stake in the our last game, and the benefits of winning that will help us do what we need to do during the summer and ahead of the next campaign.

It will be a game fraught with tension, the fact that we’ll be playing a local rival only exacerbates that, but the important thing is that we got there. Having beaten Napoli and Valencia convincingly in the quarter and semi-finals, there’s enough from those performances – and our previous encounters with Chelsea this season – to go to Baku with genuine optimism.

That’s something which has been in very short supply recently, so it’s great to have that back again. The build-up will obviously dominate the next few weeks, and it seems like an interminably long time to wait before we play the final, but that’s a small price to pay for being there in the first place.

That’ll be available before lunchtime. Until then, check out the report, stats, player ratings and more on Arseblog News.