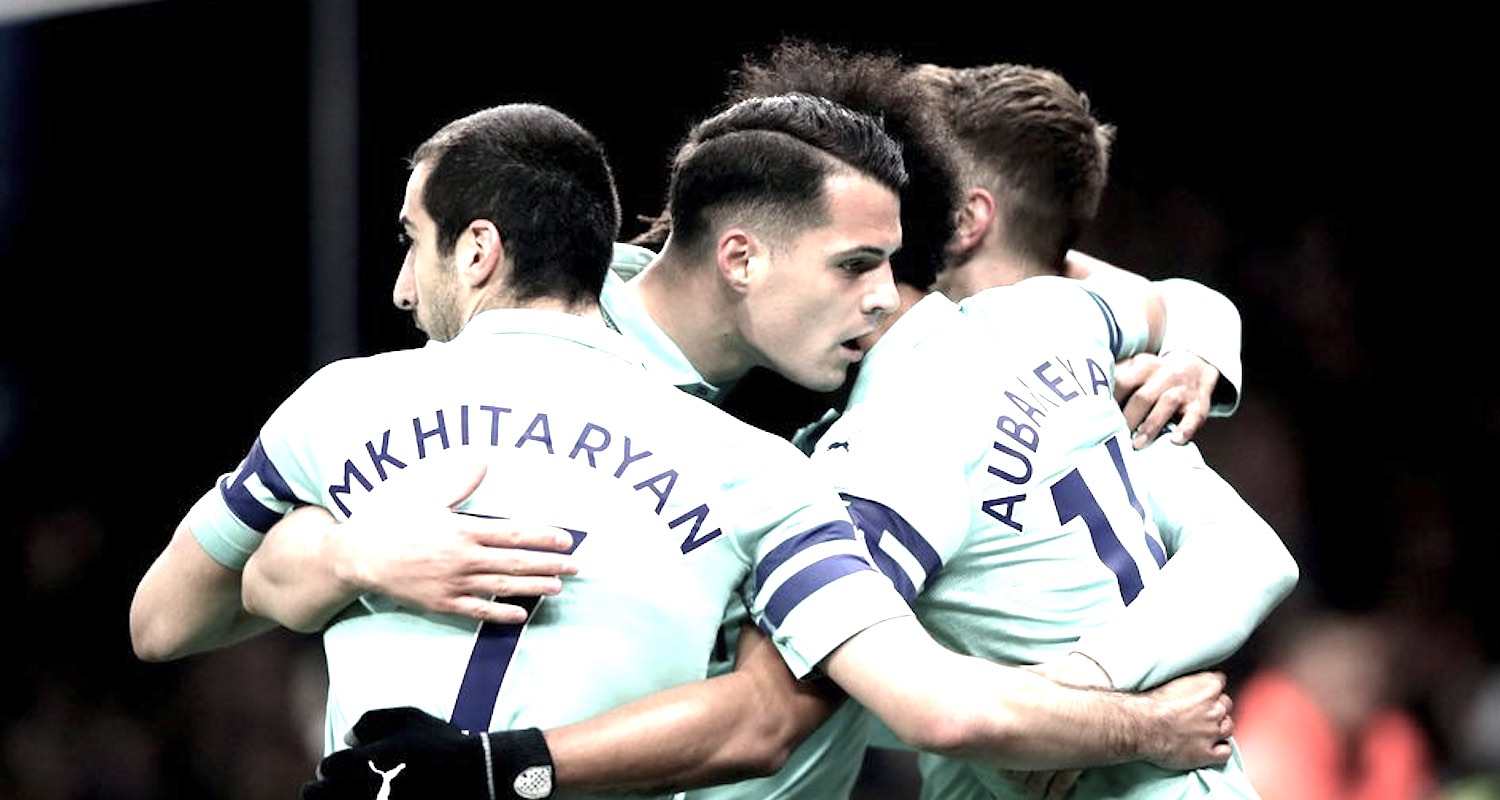 Last night’s 1-0 win over Watford was obviously very welcome, the three points were vital in our chase for the top four, and a clean sheet – away from home no less – was the first time we’ve managed that on our travels this season. All of those things tick the right boxes for me this morning, and anyone who didn’t enjoy Troy Deeney’s red card is dead inside, so from that point of view there were things to like about what went down at Vicarage Road.

However, if anyone tells you they enjoyed that game as a whole, you will know what kind of person they really are because their pants will be on fire. It was, frankly, torturous at times. I had steeled myself for the inevitable Watford equaliser, but thankfully it didn’t come and the win took us above Chelsea and Manchester United into the top four.

The home side started quite brightly, and I worried a little that the fact we were away from the Emirates was preying on our minds. But then Pierre-Emerick Aubameyang closed down Ben Foster with a determination and a burst of pace that was Henry-esque, and the keeper’s clearance rebounded off the striker and into the net to put us ahead. It wasn’t great from Foster, but I think we should give Aubameyang more credit than apportion all blame to the Watford man because he played a big part in forcing the error.

Then the sending off. You all know the Deeney quote about playing against Arsenal: “Let me whack the first one and see who wants it.” Well, he whacked Lucas Torreira with his forearm as he was running past and the one who didn’t want it was the referee who promptly sent him off. It was stupid from the Watford captain who can have no complaints. He picked on a little fella, which is cowardly enough in the first place, and paid the price, and his performances against us since he came out with that ‘cojones’ nonsense are nicely summed up below:

So, a goal up and a man up, I expected us to take full advantage. Instead, we played within ourselves. The passing was pedestrian, we did little to make use of the extra space or the extra man, and but for Bernd Leno we might have found ourselves in some real trouble. The German saved brilliantly at his near post after Xhaka misjudged a long ball into our box, and then when Torreira was penalised for a foul outside the area, he produced a magnificent save to deny Capoue an equaliser from the resulting free kick.

Emery had to change something at the break, and I fully expected Mesut Ozil to come on. I wasn’t necessarily expecting it to be for Lucas Torreira though. The Spaniard’s explanation for it was:

First I decided to do the change of Lucas Torreira because, after the red card, the atmosphere is against him. Also, the doctor said to me in the first half that he has a little pain from Thursday’s game against Napoli and I decided ‘okay, it’s the moment’.

The latter I get, the former not so much, because even if the Watford fans were making like Stoke fans and booing the bloke who was on the receiving end of a red card challenge, I didn’t think Torreira was affected at all. Still, Ozil on for the Uruguayan couldn’t be viewed as a negative, and I thought the German would help us control the game and create chances. It didn’t really happen, although perhaps our best period of the game came immediately after half-time, we looked most in control.

However, Emery tinkered. Dinos Mavropanos, starting his first game in a year, looked very rusty, and when one misjudgement almost left Watford with a 2 on 1, the manager hauled him off in a hurry and put Matteo Guendouzi on. That saw us revert to a back three with Alex Iwobi and Henrikh Mkhitaryan, who had a terrible night, playing as wing-backs. It felt forced and makeshift, the bit of impetus we had disappeared, Watford came back into it, and Emery was forced into another change to try and make things better, this time putting on Ainsley Maitland-Niles for Aaron Ramsey who probably wasn’t earmarked to play the full 90 anyway given we have Napoli on Thursday.

We did have some chances, Aubameyang missed a couple, Mkhitaryan missed the best one after Iwobi laid it on a plate for him at the back post, but the lack of conviction in the finish allowed Foster to save. The Armenian’s response to that was to fire a clutch of shots increasingly wide, and it all just added to the frustration and the anxiety that was building because one moment from Watford could cost us points. That was evident when they hit the bar with a cracking shot from distance – Leno was beaten – and although the introduction of Maitland-Niles gave us a better shape and the young man was defensively aware to block another good chance for Watford, I don’t think what the manager did from the bench last night really helped us at all.

As the game entered its final stages, I was picturing a hundred ways in which the inevitable Watford goal would go in. A set-piece, a scramble in the box, a penalty after a stupid challenge, Mkhitaryan finding the finish … but at the wrong end. I know it’s fearing the worst but how often have we, as Arsenal fans, seen it happen? Thankfully, it didn’t, and ultimately that’s the most important thing. We needed the three points, we got the three points, and we go on to the next game.

And look, I absolutely understand people who say ‘The performance doesn’t matter, it’s all about the result’. However, if the result was all we focused on this would be a very short blog.

Arsenal won. Thank you and have a good day.

Of course the fact we won is the most important thing, but it doesn’t mean the performance is unimportant. Should we worry that our struggles on the road continued even though we had a massive advantage for 80 minutes or so? It’d be foolish to ignore it when three of our last five games take place away from home. The inability to properly control the game with the extra man, and the inability to score more at a point in the season when goal difference is a genuine consideration should give us some pause for thought at least. Much like the game against Rennes when Emery’s changes to a 10 man Arsenal didn’t do us any good, his decisions last night are open to analysis because I don’t think they worked. It’s not wrong to discuss those things.

On the other hand, this is a team whose away form is basically rubbish and it’s going to take time to build up confidence. If this helps in any small way with that, then we can view it a positive even if watching that game last night didn’t nothing for my heart and added a few more grey hairs to to my muzzle. The points were vital, we got the points, and we can be very happy about that, but as we prepare for the Italian job on Thursday – and later our trips to Wolves, Leicester and Burnley – let’s not ignore the difficulties we continue to have on our travels because they inform the perception of this team to a significant extent.

If we can grind out wins in those games and do what we need to do in terms of finishing in the top four, nobody will care too much about how we play. You could even say there’s a measure of character in doing it, but we have to do it first. The win itself is a green shoot, as is our first clean sheet of the season away from home, but it’s only our second win away from the Emirates in ten Premier League games so there’s still plenty to do in what remains of this season.

The three points are tucked nicely under our belts though, and we’re back in the top four, so hopefully the players take encouragement from that as we prepare to face Napoli then Crystal Palace at the weekend.

That should be available on site and in your favourite podcast app before lunchtime, and we’ll have more reaction over on Arseblog News throughout the morning.