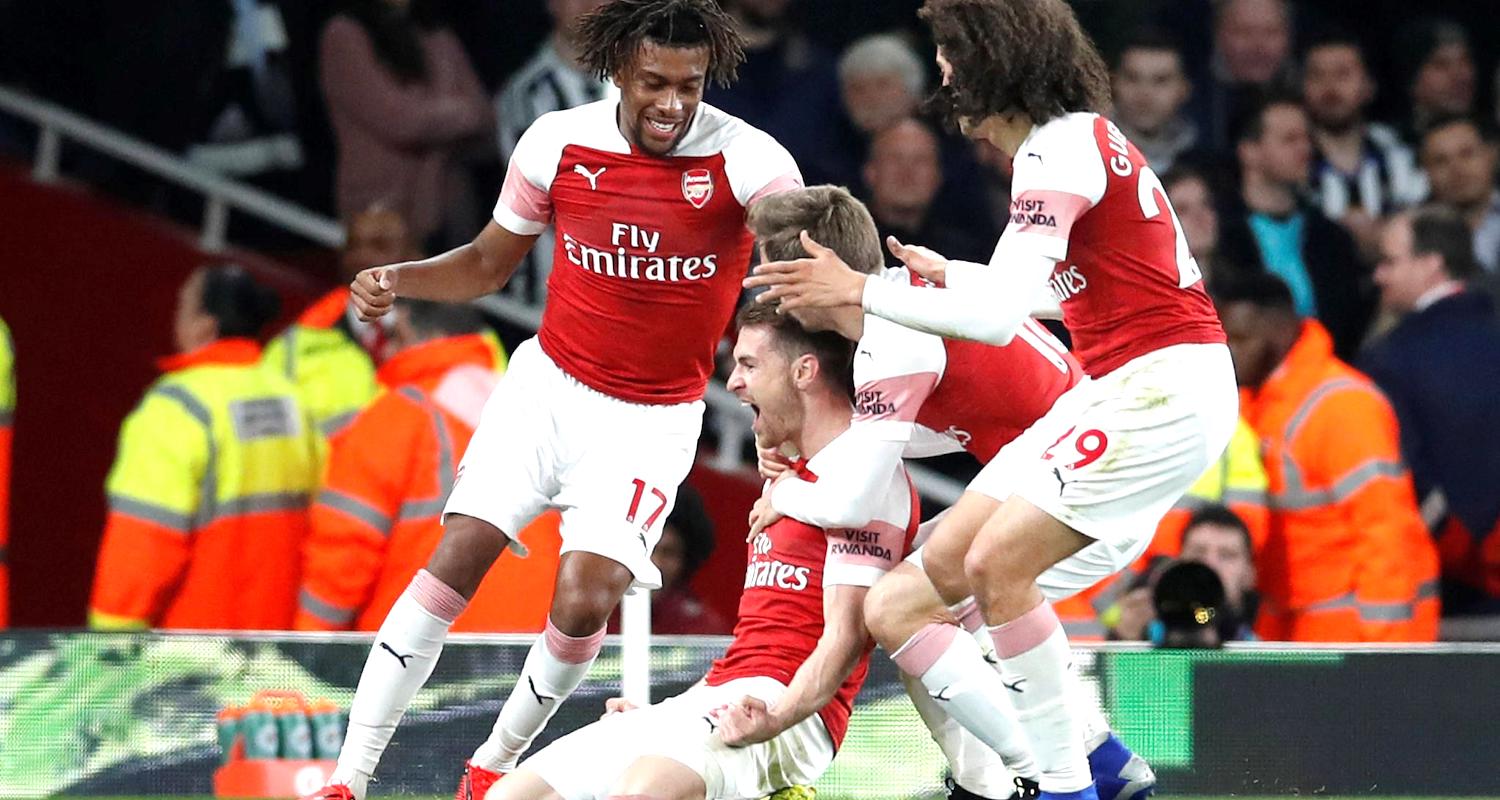 Arsenal are into third place in the Premier League after goals from Aaron Ramsey and Alexandre Lacazette gave us a 2-0 win over Newcastle last night. The Welshman captained the side in the absence of the injured Laurent Koscielny, and we were also without Granit Xhaka whose groin problem meant that Matteo Guendouzi came back into the starting XI. A midweek illness kept Pierre-Emerick Aubameyang on the bench, so Alex Iwobi came into the team for him.

It was a game that was slow to get started, not unusually so after an Interlull of that duration, but it was immediately obvious that Newcastle were going to sit deep, deny us space and look to hit us on the break if they could. We played primarily in their half and should have been ahead when Aaron Ramsey finished a flick on from a Mesut Ozil corner, but Anthony Taylor disallowed it for a foul by Sokratis on the defender. Sky replays later showed he couldn’t have seen the incident clearly, so it was guesswork on his part, not to mention it was the kind of coming together in the box that happens all the time at corners and set-pieces and which is almost never penalised one way or the other.

I thought we looked a little imbalanced in the first half, but Ramsey was the man really driving the team forward so it was apt that he scored the opener, a goal that Taylor couldn’t disallow even if he wanted to (which he probably did). Guendouzi played it to him from just inside their half, he flicked it to Lacazette, got a bit of luck when the ball broke back to him, and his left-footed shot beat the keeper and went in off the post.

Taylor: Was it dangerous play towards the post? Is there anything in the rules about excessive use of the post? I’m sure I’ve seen something that says ‘Overly posty’ somewhere. Dammit. I’ll have to give it.

Newcastle had a moment where they threatened immediately afterwards, but things settled back down into the usual pattern where we had lots of the ball in their half. We could have doubled the lead just before the break when a lovely flowing move ended up with Lacazette taking a shot on the turn only to see it cleared off the line. I can appreciate excellent defending, which that was, but it would have been one of those goals that would have been replayed over and over had we found the finish.

The second half was more of the same, lots of possession, but not too much in the way of clear cut chances. Aubameyang came on for Iwobi, Ramsey came off with what Emery described afterwards as ‘cramp’, and we were in that situation where we were in complete control but the one goal lead made everything a bit nervy. All it would take is a set-piece, a mistake, and they were back in it.

Auba made a difference, helping keep Newcastle pushed back as they brought on players to try and have a go, and he was involved in the move that sealed the game. I thought Lacazette’s flick forward would be meat and drink to a defender, but his strike partner headed it on, the French international’s run was perfectly judged, and he got there before the keeper to lob it over him and make it 2-0.

Taylor: That was a bit French, wasn’t it? A bit too Gallic. Is Aubameyang’s hair obstructing the view of the defender? Oh, I’ve got it! Ball over head-height, I’ll disallow this now and … oh … that’s crap 5-a-side rules. Damn these Arsenal players for making my life so impossible.

I have to say I’ve been so impressed with Lacazette this season, and more than anyone he deserved his goal. The amount of work he puts in, whether he’s playing up front on his own or alongside Aubameyang, is phenomenal, and you can see so clearly the change in his personality this season from last. He looks like he really belongs, he takes responsibility, and the Arsenal shirt just seems to fit him perfectly these days. His connection with his mate is something he addressed after the game, but he encapsulates the kind of spirit and endeavour we’re going to need if we are going to finish in the top four this season.

The Frenchman was involved in what should have been another goal late on, but Anthony Taylor had had enough of not disallowing goals and ruled this one out for reasons I can’t fathom. The Sky commentators seemed to suggest he’d seen a handball, except the ball had come off the one man in that part of the pitch who was allowed use his hands – the Newcastle goalkeeper. Maybe there was a foul, but I don’t know by who, certainly not Lacazette, so my guess is it was just another piece of awful officiating from a man who is to refereeing what Theresa May is to deal-making. Perhaps it’s churlish to even mention him, but he put himself front and centre with his decisions, so I don’t see why he should be immune from some post-game comment.

The main thing, however, was that we won, took three points and moved ahead of Man United and Sp*rs in the Premier League table. Defensively we weren’t really troubled. Another clean sheet is very welcome too, that’s three in a row now for a team that hasn’t kept too many of them this season, so that’s a promising sign as we head into the business end of the season.

Offensively I’ve seen better from us, but there were some lovely passages of play which were encouraging, and maybe when everyone’s just a bit sharper those might produce a bit more. Mesut Ozil’s contribution grew throughout the game – one particular pass to Aubameyang was outstanding, and as a way of getting going again after three weeks without competitive football, I don’t think we can have any complaints about what we did. At this stage of the season it’s about getting points under your belt and we made sure we took all three last night.

Afterwards, Emery was pleased with the win but immediately the focus was on Sunday’s trip to Goodison Park to face Everton:

Today, for me, is an important victory and it’s important to take this confidence and this position on the table. But I know Sunday is a big challenge and a very good challenge because each match is so hard in the Premier League. We know that now we are in front, for the third position, but we are going to play a lot of matches and also the opposition is going to demand us to get a lot of points because they are going to do that.

So one down from our fateful eight, seven to go, and you can’t underestimate the importance of getting our momentum going again. This is a team with plenty to contend with in the next few weeks, so maintaining confidence and our increasingly impressive home form – that’s 10 consecutive Premier League wins now – will hopefully carry over into our away games.

Taylor: I think this blog post should be disallowed for over-arching Arsenal bias. It’s almost as if the writer is … ah, shit.

James and I are recording an Arsecast Extra this morning. As always, if you have questions or topics for discussion, send to @gunnerblog and @arseblog on Twitter with the hashtag #arsecastextra – or if you’re on Arseblog Member on Patreon, leave your question in the #arsecast-extra-questions channel on our Discord server.

Podcast will be up later on, until then.