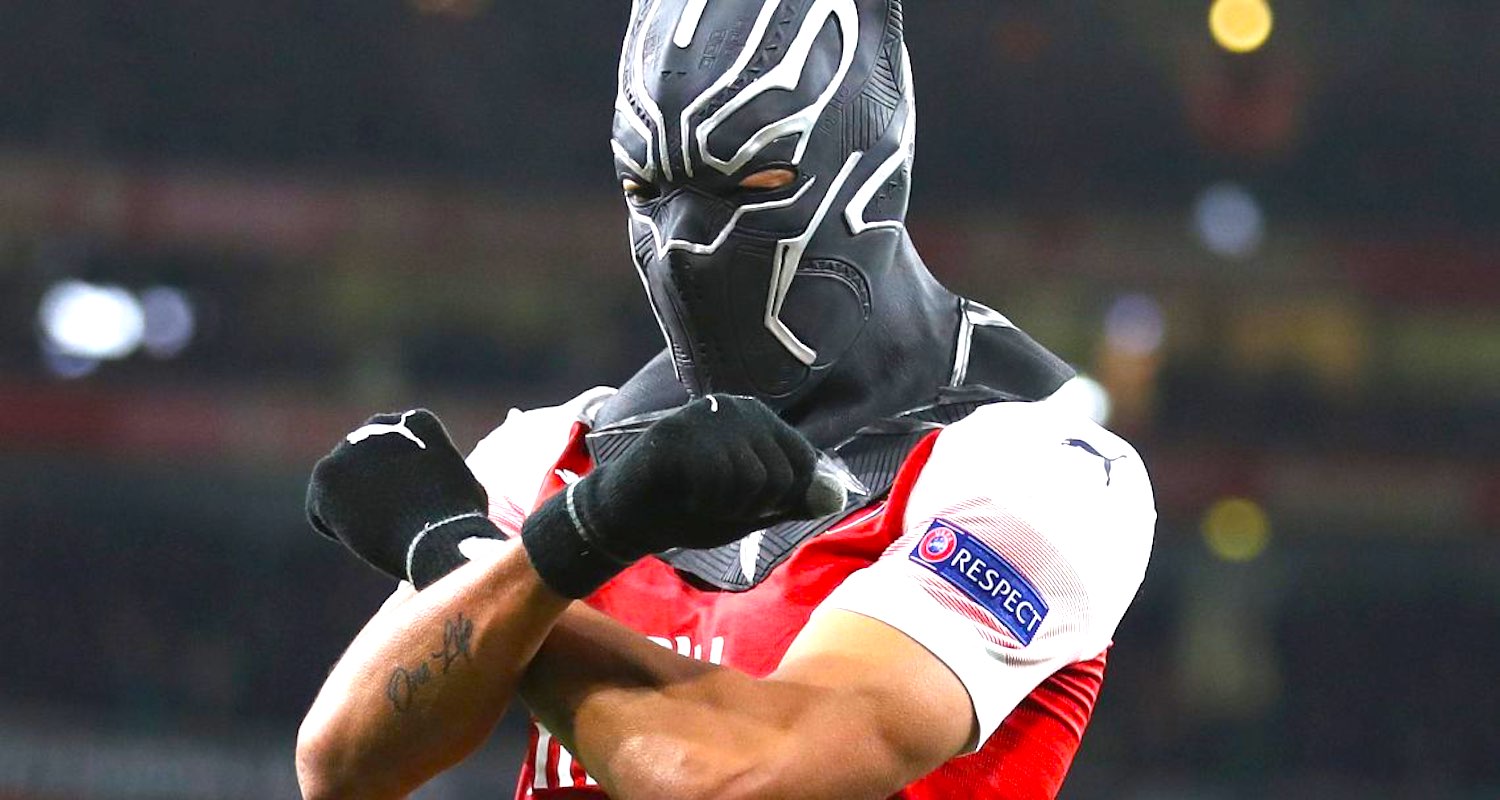 Three goals. A clean sheet. One Black Panther mask. And safe passage into the quarter-finals of the Europa League. All in all a satisfying night for Arsenal and Unai Emery, meaning we go into this extended Interlull in the best way possible.

The system was the same as the United game, but the team had two changes as Petr Cech came in for Bernd Leno and Shkodran Mustafi replaced the suspended Sokratis, and like the first leg in France we took an early lead. We worked the ball over to the right hand side, Ainsley Maitland-Niles found Aaron Ramsey in the box and he squeezed in a cross to the near post which Pierre-Emerick Aubameyang tucked away first time.

A few minutes later the lead was doubled. Sure, next season when there’s a VAR-man waiting in the sky this goal would have been ruled out for offside, but we’re not living in the future so it wasn’t. Aubameyang was offside when Ramsey played the ball back to him, but I think the linesman was looking at Kolasinac who was even more offside, which allowed the striker to dink a cross to the back post which Maitland-Niles met with a powerful downward header for his first European goal in an Arsenal shirt.

The Hale End graduate has found consistency a bit of an issue this season, but it feels like the last couple of games have been a step forward for him. Aubameyang, speaking afterwards, made a point of praising the 21 year old and stressing how important it is for Arsenal as a club that young players who come through the ranks can see a pathway to first team football, and he’s absolutely right.

I enjoyed the fact that Mesut Ozil had given up on it because the offside was so blatant, but having never forgotten the old adage about playing to the whistle, the wing-back didn’t do the same and got himself a goal his performance over the last two games deserved. After that Rennes got a bit more organised, worked a bit harder, dived a bit more, rolled on the ground a bit more frequently, and generally became quite annoying.

The game was scrappy and tetchy, Lacazette picked up a yellow for a foul which was a foul but the way the bloke reacted you’d have thought he’d been attacked by the crap bear that failed to kill Leonardo DiCaprio in the opening part of The Revenant, thus making us watch another 100 minutes of him shivering, trying to understand what Mumblin’ Tom Hardy was saying, and somehow surviving when he drove his horse over a goddam cliff. Anyway, Arsenal continued to play some nice stuff, another good move down the right ended with Ramsey shooting at the keeper and generally Rennes had little to offer from an attacking point of view.

They did hit the post early in the second half, but that’s only because Mustafi was feeling like it was all a bit too easy and wanted an extra challenge. Even then it didn’t spark them into life. Ben Arfa was apparently on the pitch, probably spending his time checking the facial expressions of Emery because he wasn’t playing much football as far as I could see.

Then another one of their players put forth his audition for the Royal Shakespeare Company, lying in a crumpled heap after he’d kicked Lacazette. It was clearly an attempt to get the Arsenal man sent off, and while the referee was a bit frustrating on the night, to his credit he didn’t buy this nonsense for one second. He came over, told the spoofer on the ground to get up, but he didn’t because he’d now felt a twinge in his shamestring, and in the ruckus one of their players got booked for dissent. Ben Arfa looked at Emery whose facial expression was inscrutable.

When they did threaten, we defended excellently. Kolasinac made a superb block to deny a shot and Koscielny read the game well all night, before we made changes, bringing on Alex Iwobi and Henrikh Mkhitaryan for Ozil and Lacazette. The two made an immediate impact. The former hit a shot just wide, and the latter was involved in our third goal, feeding Kolasinac whose low cross was tucked away at the back post by Aubameyang.

Everyone will have seen the celebration by now, he donned a Black Panther mask, and explained why afterwards. He got a yellow card for his troubles, but you can be quite sure this will be an iconic moment for many. The sheer volume of photos and coverage of it illustrates that. It might not be for you, but maybe stop and think about who it is for and how many kids will connect with it in a really cool way. Everything in football has to be super serious these days, yet at the same time people bemoan the lack of characters and personality. Here’s one, he plays for us, and last night he scored twice and got an assist for the other goal, so leave your accusations about him not concentrating on football and all that to one side.

Now, in fairness I could have given him a slap in the belly with a wet fish when he missed a couple of chances afterwards, in particular the one that Ramsey created by playing a one-two with himself, but it’s hard to complain too much when you consider his impact on the performance and the result. He does miss a few along the way, but he’s got 22 already this season, he’s come through a poor spell and you can be sure that he’ll get plenty more between now and the end of the season.

3-0 seemed emphatic, but of course a Rennes goal would have seen the game go into extra-time. They stopped being floppity little twats and decided to play a bit of football, sensing that this might actually be beneficial to them. The offside flag prevented them from having a clear sight of Cech’s goal, and if they’d concentrated a bit more on the ball than the theatrics for the 90 minutes they might have caused us more problems, but they didn’t so they can stick it. The final few minutes were a little nervy because of the tight margin, but in the end there’s no question we deserved the win and qualification for the next round.

Afterwards, Unai Emery was happy but felt his team could have done a bit more:

I’m very proud of the supporters and players. We worked very well this week. We can be happy. We were very competitive over 90 minutes but can do better. We could have had more control of the ball. It’s easy to say here instead of on the pitch.

Which is fair enough. We probably could have won this game in more emphatic style, but when you come from 3-1 down in the first leg to qualify, when you don’t concede, and it comes off the back of a very important win against a top four rival, it really feels like nit-picking to focus on that this morning. It has been an excellent week, the response to the derby disappointment has been perfect, and we now await the draw later this morning.

Our potential opponents are Napoli, Villarreal (Hi Santi!), Valencia, Slavia Prague, Benfica, Frankfurt and Chelsea. We’ll cover that over on Arseblog News as and when it happens, so keep an eye out there for that.

James and I are recording an Arsecast Extra this morning. As ever, if you have questions or topics for discussion, send to @gunnerblog and @arseblog on Twitter with the hashtag #arsecastextra – or if you’re on Arseblog Member on Patreon, leave your question in the #arsecast-extra-questions channel on our Discord server.

That will be available before lunch, until then.