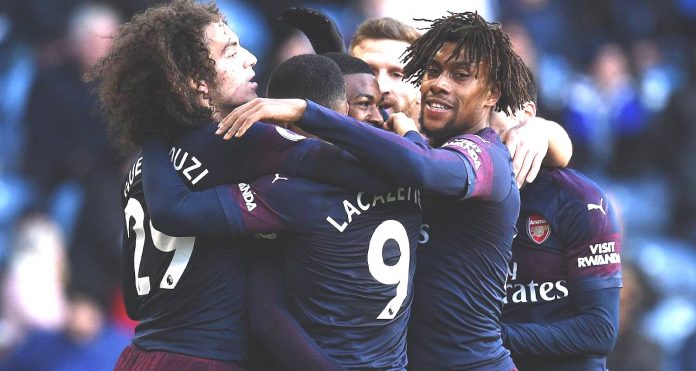 Already without a clutch of players due to injury, Arsenal went into this game with Mesut Ozil and Pierre-Emerick Aubameyang absent through illness, Aaron Ramsey missed out with a knee injury, and Granit Xhaka’s groin strain saw him sidelined too.

Ainsley Maitland-Niles was fit again and started on the right, Henrikh Mkhitaryan was back in the side for the first time since December, and against the league’s bottom side we played a back three with Mustafi, Koscielny and Monreal. In my preview of the game I spoke about wanting to see Arsenal really have a go against a team who have won just twice this season, but clearly the players we had missing informed Unai Emery’s approach which was to sit off them and then hit on the counter.

I suppose given that we took three points we can say it worked, but it wasn’t particularly pleasing on the eye and over the course of the 90 minutes Huddersfield had more of the ball, made more passes, enjoyed greater territory than us, had more attempts on goal, more attempts on target, and while I fully accept the manager’s options were limited yesterday, I found the way we played difficult to enjoy.

The win? No complaints. We needed the points because United had won earlier at Fulham, a pretty convincing 3-0 win at one of the Premier League’s bottom teams, so above all else we had a job to do yesterday and we did it. You can argue that this is all that counts, and I can see that point of view. At the end of the day the most important thing is the result, and I also understand that we’re a team that hadn’t won away since November and ultimately Emery’s target yesterday was to take three points. On that basis, the job was done.

The goals came from Alex Iwobi, who got a bit of luck when his volley from a Sead Kolasinac cross to the back post deflected off the defender and wrong-footed the keeper. It wasn’t an easy one for him to get on target though, so he was rewarded for his technique. The second came via good work from Mkhitaryan, then a great low cross from Maitland-Niles, and Alexandre Lacazette was there to apply the close range finish. 2-0 before half-time.

Generally speaking it was pretty comfortable, but then we were playing a team who have scored just 13 goals in the league this season so it was hardly as if we were going to be under the cosh. Our five defenders and two defensive midfielders weren’t overly troubled, even if we needed Laurent Koscielny to be at his best. One brilliant intervention when Leno pushed a save straight out in front of him prevented Huddersfield from making it 2-1 in the 72nd minute. Given our ability to concede at any moment – as evidenced late in the game when Kolasinac scored an own goal – I think that was a fairly pivotal moment.

We had chances we didn’t make the most of, the final ball to Lacazette was never quite right, much to his increasing frustration, but never once could you have said we had control of the game. Our passing was awful, Kolasinac completed just 55% of his passes which is horrendous at this level. The more the game went on the more isolated Lacazette became up front and we found it hard to get out of our own half … against the team bottom of the league who have won twice all season and scored just 13 goals.

Maybe this was all Emery’s plan, to sit off and trust that even our defence could cope with an attack so ineffective. If so, I guess it worked, but it wasn’t much fun to look at. Some will ask, do you want to win or do you want to be entertained? First and foremost I want to win, of course, like every fan does, but it’s not a crime to suggest that the football we played yesterday, and the football we’ve seen in general this season hasn’t been particularly enjoyable. During the 22 match unbeaten run it’s fair to say that most of the games were ground out to extent rather than convincing performances in which we dominated the games.

I don’t think it’s the case that Emery simply doesn’t have the players to play more attractive football. Perhaps yesterday there’s more mitigation to make that argument, but let’s remember we set up exactly the same way a few weeks ago against another of the league’s struggling sides, and until we were awarded a penalty against Cardiff in the 66th minute we hadn’t managed a shot on target. I get that a team without Ramsey, Ozil and Aubameyang is limited, but should that really see Arsenal play the way we did yesterday against Huddersfield?

I know we’ve had flashes this season when we play well, but I think those performances are often married with a kind of ambition we don’t see often enough. Fulham away is held up as a gold-standard for ‘Emeryball’, but on that day we played an offensive 4-2-2-2 formation, we had Ramsey and Aubameyang to come off the bench and the substitutes made a big difference that day. Sp*rs and Liverpool at home, we played with real intent and were rewarded. Leicester at home saw our most talented player pull the strings.

Generally though, there’s a conservatism and caution to the way Emery sets up his team which feels inhibiting to our performances. I understand fine well that we have defensive issues which would give any manager nightmares, but also we have a lot of attacking talent in this squad which I don’t think we use well enough to help us control games. I know it’s going to take him time and another transfer window or two to get his team the way he wants it, but even with that I can’t help wonder how different his methods will be. Time will tell, I guess, and until then Arsenal’s performances are things to be endured rather than enjoyed.

I don’t know if this is just something we have to get used to now, a manager who is more functional than the man who came before, but Wenger built his legacy on attractive, attacking football. It fell by the wayside as his powers waned in the latter years, and there wasn’t much to enjoy about the way we played in the last couple of seasons either, but you knew what he was about. We’re still trying to work out the new man, and as I said there are all kinds of mitigating circumstances, but maybe what we saw yesterday against Huddersfield is the essence of Emery – someone who values the result above style of play, rather than someone whose style helps his team achieve results.

I think there’s a bigger discussion to be had about how important a team’s style of play is. How it can inspire a crowd, how it generates interest, garners new fans, instills belief in players and their ability to perform on a consistent basis, and ultimately how it shapes the perception of your club. It can make it attractive to players who want to come and play for you, and from a commercial point of view which is fundamental in this day and age. To say it doesn’t matter is wrong, it really does, but maybe that’s a post for another day or for a podcast chat.

All that said, we’re now just one point off fourth placed Man Utd. Chelsea play Man City today so we could do with them dropping some points, and our next two games are at home against Southampton then Bournemouth so there’s a good chance to build some momentum in the next couple of weeks. We do have two Europa League games before our next Premier League one though, so the attention can turn to that competition over the coming days.

Right, that’s your lot for this morning. James and I are recording the Arsecast Extra a bit later on this evening, so we may have that podcast available tonight but if not it’ll be out first thing Monday morning.

Have a great Sunday.