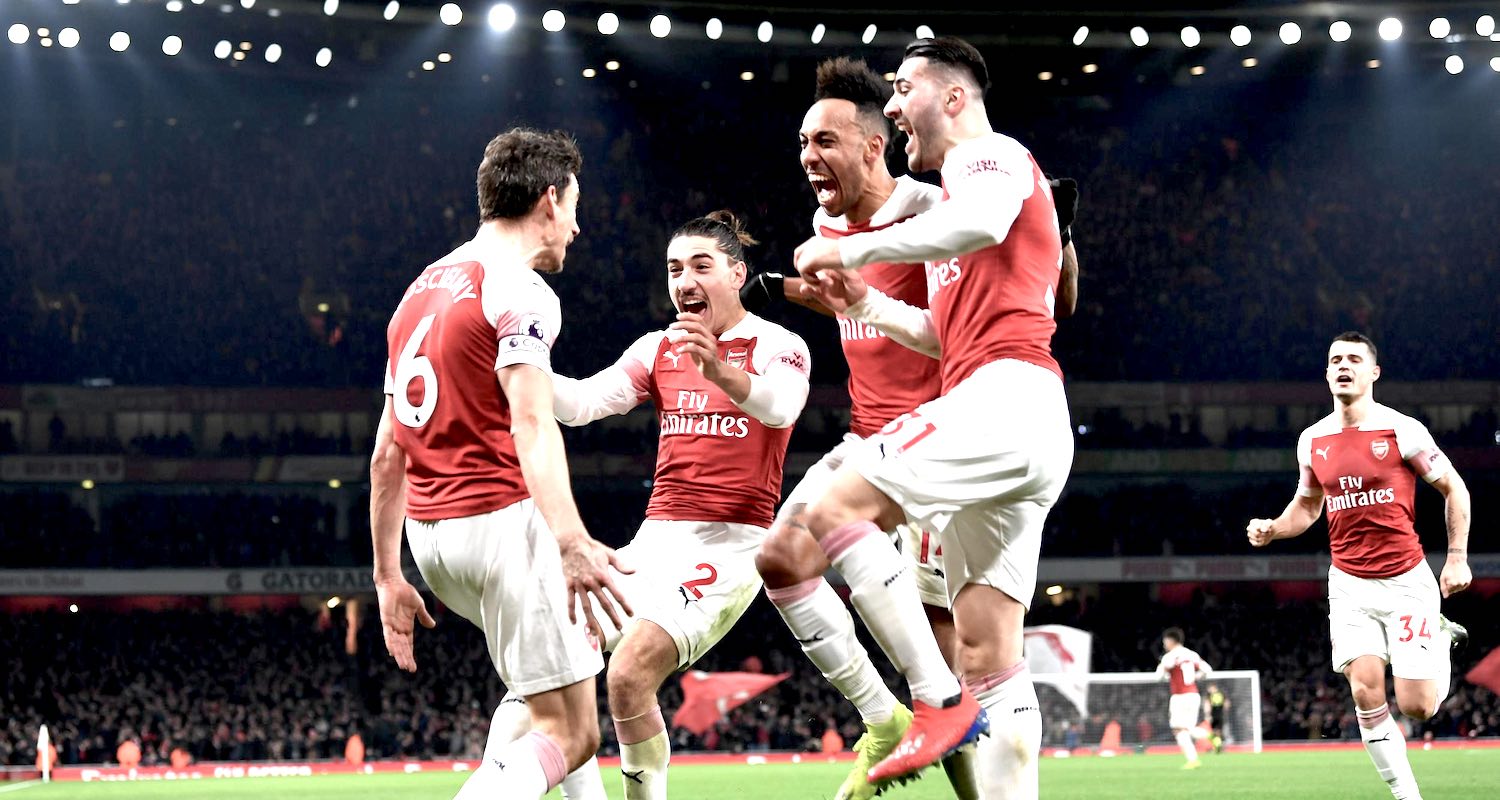 Arsenal’s top four hopes were kept alive thanks to an interesting 2-0 win over Chelsea at the Emirates yesterday. The goals came from Alexandre Lacazette and Laurent Koscielny, and despite the fact the visitors dominated the second half in terms of territory and possession, they couldn’t find a way through, meaning we kept just our second clean sheet in sixteen games.

As I hoped he would, Unai Emery reverted to a back four, pairing Koscielny with Sokratis, and gave a start to Aaron Ramsey in midfield. We also got that rarest of things, a bright start and a good first half performance, and that was what ultimately won us the game. Quite how we didn’t score until Lacazette’s opener is beyond me. Aubameyang missed a glorious chance after his strike partner laid it on a plate for him; Sokratis headed wide; and Koscielny’s point-blank header hit the Arrizabalaga and rebounded over the bar with the Spaniard knowing little about it.

Our pressure told eventually however. A short corner routine saw Bellerin cross the ball, Lacazette took three sublime touches and with his fourth he smashed the ball into the net at the near post. The technique on the shot was really something too – it was like a golfer punching the ball out of the rough, giving it the height and power it needed to beat the keeper.

They almost equalised soon after, that tendency we have to give up goals just after we’d scored apparent again, but Pedro’s lob landed inches wide of the post after his run beat the offside trap. After a scintillating start the game settled down a bit, but what was evident in the Arsenal performance was an energy and defensive commitment that made life difficult for Chelsea. To a man we put the yards in, and both Lacazette and Aubameyang set an example with the way they got back to defend.

The second goal may well be one of my favourites this season. It came when Luiz crunched Ramsey in a tackle, got booked and gave away a free kick. Torreira took it, Kolasinac headed it back to Sokratis who shinned it back into the box like a startled foal, and Koscielny’s clever movement saw him beat the offside trap. The fact that he mistimed his header and the ball looped in off his shoulder while wrong-footing the keeper made it all the better, and you could see how much the goal meant to a player who has been through a lot in recent times.

Right before the break they hit the post with a header from a corner, and we had to defend stoutly to keep out a free kick in a dangerous area, but the half-time lead was well deserved. The second half was quite odd, because they clearly had more of the ball, we struggled to keep hold of it when we did get it, but they just weren’t that dangerous. Perhaps it was the lack of an actual forward, a focal point for their attack, but I think we deserve some credit for it because of how well we defended.

The best chances of the second period fell to us. We had full backs overlapping and unable to find the final ball, Hector Bellerin took a touch too many at one point when he had Lacazette and Ramsey waiting for a tap-in. Chelsea created nothing like that, bar one Hazard cross which fizzed along our six-yard box but they had nobody in there to apply a finish.

They made changes, bringing in Giroud to give them something in attack that he didn’t want to give them because he’s clearly a red and white sleeper agent, while we brought on Maitland-Niles and Iwobi for Ramsey and Lacazette who had both run themselves ragged. Then, sadly, we were forced into another one when Hector Bellerin suffered what looks like a very serious knee injury. Emery was far from optimistic afterwards, and if you’ve seen the incident and the many replays going around this morning, like me you’ll be wishing Hector all the best because I’ll be very surprised if we see him again this season.

Maitland-Niles slotted in at right back, and did well with one particularly excellent interception to stop a clear-cut Chelsea chance, but with so much of the ball (64.3% possession overall) they simply huffed and puffed their way to the final whistle, as Arsenal’s dogged determination kept them away. Afterwards, Sarri absolutely laid into his players, saying they lacked character and questioning their ‘ferocity’, which might be a valid complaint if you didn’t someone like Marcos Alonso careering around the pitch like a footballing blunderbuss, sticking his thumb in people’s eyes and so on. Anyway, that’s his problem to sort out, and it’s fair to say that Emery had problems of his own to deal with in the build-up to this game and he got it spot on yesterday.

I know we have issues with the balance of our squad and that we need investment in key areas, but it was the kind of performance he should be able to get from these players on a more consistent basis. While I loved how we defended, individually and collectively, we also attacked well and played on the front foot. We took the game to Chelsea, it paid dividends, and I hope there’s something of a lesson there for the coach.

It’s fine to respect the opposition, but there are games I can think of in recent memory when this kind of approach would probably have seen us take three points. I understand we’ve come through a period when we’ve had issues with absences and so on, but we’ve been overly cautious and I think it’s cost us. Yesterday, we went back to something akin to the way we started the season, the players responded and in part that’s down to familiarity and feeling comfortable with what they were being asked to do.

On top of that the physical effort was exemplary, with Match of the Day illustrating how hard we worked in terms of just running:

The fact we did it in such an organised fashion is very pleasing, and while people scoff sometimes at the idea of endeavour being a significant factor in winning football games, if you push yourself you’re often rewarded, and I think that was the case yesterday.

A word for Laurent Koscielny whose performance should be an example, putting his aging body on the line he embodied everything we want to see from a centre-half. His reading of the game was immaculate, he was a threat at the attacking end from set-pieces, and with 12 clearances (3 more than the entire Chelsea team made), his defending was hugely important yesterday. It reminded me of Per Mertesacker in the FA Cup final, that’s how good it was.

Sadly, the win is somewhat coloured by the injury to Bellerin, a very important cog in our machine, and it raises questions about what we’re going to do if/when his absence is confirmed as long-term. It was too soon for Emery to have given it any deep thought, and he cited Stephan Lichtsteiner, Ainsley Maitland-Niles and Carl Jenkinson as options – which of course they are – but it will give him plenty to consider as he tries to figure out the best way to cope.

Having to contend with what seems to be another long-term injury to a key part of the first team squad is seriously unlucky for Emery, who is already without Danny Welbeck and Rob Holding. It would be a challenge for any manager, not least one in his first season still trying to mould a team to his liking. We’ll wait and see what the official news is on Hector, but it may well be a case that the need to invest in January becomes ever more pressing.

Above all else though, we needed three points yesterday, a response from the players and the manager to the defeat at West Ham, and we got that. It means the gap is now just 3 points, we’ve kept alive the chase for the top four, and hopefully it’s the kind of result we can kick on from. We failed to do that after beating Sp*rs last month, so it remains to be seen how much of a bounce we get from this result, but that’s something to discuss a little bit down the line.

For today, let’s enjoy a big win that we badly needed, and the rest can wait. Till tomorrow, when James and I will be discussing it all at length on the Arsecast Extra.

Have a good one. Unless you’re Marcos Alonso.