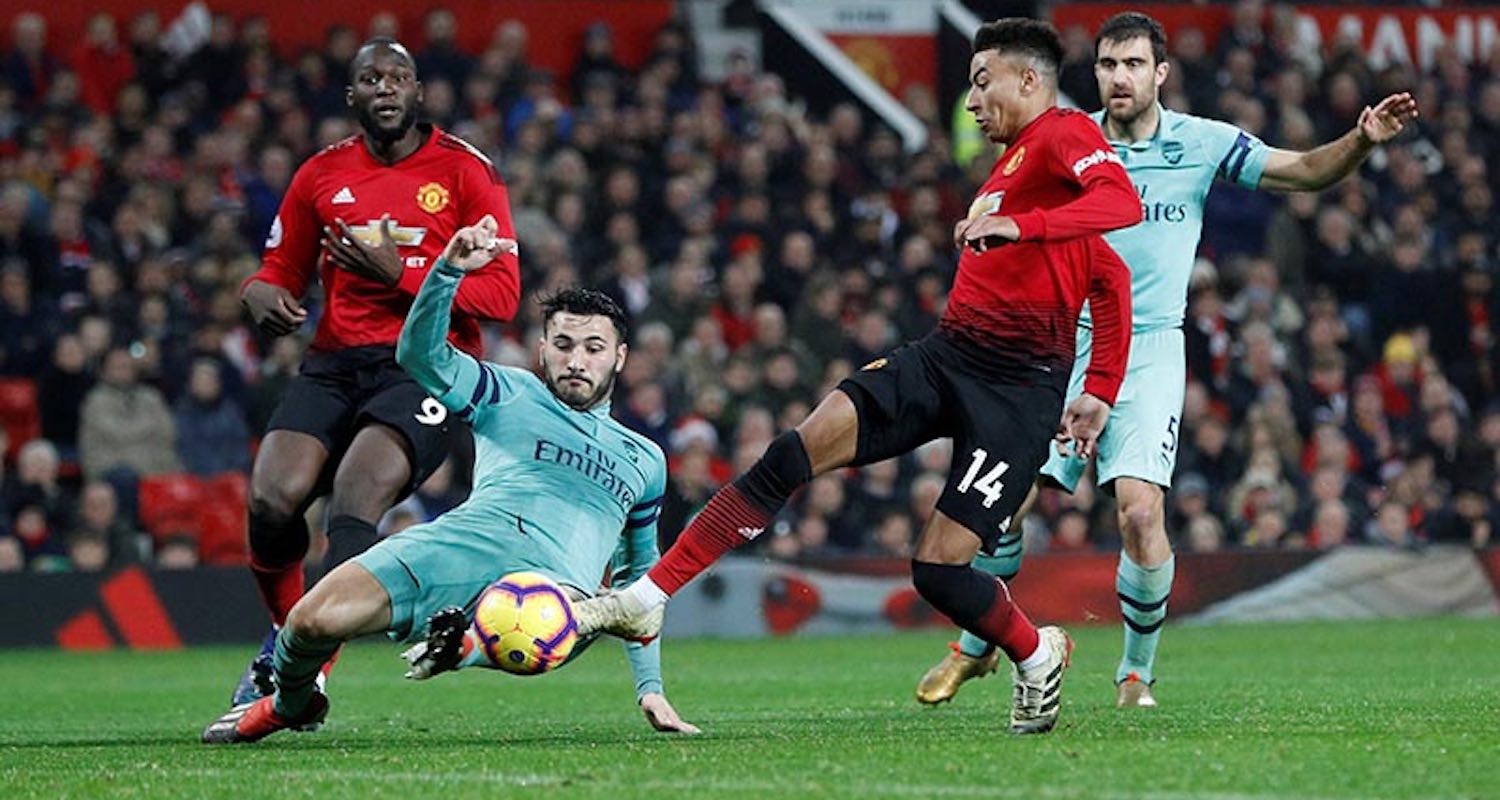 If, ahead of the two games against Sp*rs and Man Utd, you’d offered me 4 points I’m sure I would have taken that. It would mean beating one and maintaining the unbeaten run against the other. I still think in the cold light of day it’s a creditable return from two huge fixtures played within three days of each other, and yet there’s a sense of disappointment that we couldn’t come away from Old Trafford with another three points under our belts.

We led twice and conceded almost immediately both times. Less than four minutes after Shkodran Mustafi had put us ahead in the first half, Anthony Martial equalised; while there were just a few seconds between what was given as a Marcos Rojo own goal and Jesse Lindgard squaring things up midway through the second period.

When you take into consideration the huge effort we put in on Sunday, and the fact we lost two players to injury in the first 45 minutes, it might even be viewed as a positive that people are disappointed with just a point. In the context of this game, coming so soon after a hugely intense North London derby, at a ground where our record is really poor – we’d taken just 3 of the 33 points available since our last win in 2006 – a draw at Manchester United can’t be seen as a bad result, but there is definitely some sense of an opportunity being missed.

That’s as weak a United side as I can remember seeing in a long, long time, and having gone ahead thanks to a howler from David de Gea as he pushed Mustafi’s bouncing header over his own line it was there for us to put them to the sword. Instead, we saw some of the defensive issues that have been a concern throughout this season manifest themselves again.

Andre Marriner deemed Matteo Guendouzi’s challenge on Martial a foul, giving them a free kick outside the box. The offside is incidental, so marginal it’s pointless focusing on it, but after Bernd Leno made the save I don’t think we defended well enough. Alex Iwobi didn’t do enough to close down, while Rob Holding would have been disappointed to let the ball come across to the striker the way he did.

I say would have been because sadly his evening ended prematurely with what Unai Emery believes to be a big knee injury. I don’t think there was much in the challenge from Marcus Rashford, had it been Lucas Torreira clattering into one of their players we’d have been applauding the commitment, but he jarred his knee in the collision and had to be stretchered off. Quite how bad it is remains to be seen, but it’s a real shame for Holding as well as the team because he had become a mainstay of our defence this season and the improvement and development he’d made under the new boss was obvious.

It also just highlighted the risk of playing with three central defenders when you only have three central defenders. Stephan Lichtsteiner came in and did fine, but that’s a not long term option for me, so much now depends on the fitness and Nacho Monreal and Laurent Koscielny if Emery wants to continue with this system. This injury may well give him pause for thought in that regard, and an area of our squad which was already under the microscope in terms of how strong it was is now weakened considerably by what looks like a lengthy absence for Holding.

Aaron Ramsey picked up a knock late in the half and was replaced at the break by former Utd man Henrikh Mkhitaryan. I thought we were more or less on top, but you could see the physical effects of last Sunday were still being felt throughout our team. We weren’t quite as sharp as we’d have liked, and players were feeling challenges as if they were carrying some aches and strains into this game. Understandably so as well.

Alexandre Lacazette was our third and final sub, and I thought he’d scored when Rojo gave the ball to him, he traded passes with Mkhitaryan and then drove into the box. The United defender’s challenge from behind might well have been deemed a red on its own, let alone the second yellow to accompany his first half booking, but the ball looked like it deflected off the Arsenal man before trickling into the net. Officially it’s an own goal however, and I wonder if that might be something we appeal.

The important part was that we were ahead, but slack defending handed them an equaliser straight from kick off. They pumped it long, Sokratis missed a bread and butter header, and you can only categorise what Sead Kolasinac did as a bad mistake. The two defenders seemed to point fingers at the goalkeeper, but they were both far more culpable in my opinion.

Almost immediately we had the chance to go ahead again. Kolasinac’s real strength is finding space deep in the opposition half, the quality of his final ball is variable, but this time he found Aubameyang perfectly who, given the form he’s in, will be really disappointed he couldn’t guide the ball beyond de Gea. There was also a very good chance for Mkhitaryan which he missed badly. United brought on Lukaku and Fellaini for the usual bombardment, but the biggest contribution they made was the Belgian longingly tugging at the locks of Guendouzi, thinking of what used to be for his own head.

Lacazette headed the ball out of de Gea’s hands and rolled it in but because the keeper was still deemed to be in control of the ball it was disallowed. Mkhitaryan put the ball in the net from an offside position, and the referee played around 7 minutes of 4 minutes of injury time at Old Trafford because of course that’s what happens there. We had a bit of defending to do in those extra extra minutes and that was that.

I’m not frustrated, I am very proud of the players because they had a very good match for every supporter. Everyone who loves football will see that this was a good match for us.

We were playing against a very competitive team and I think our spirit is good. We got up after conceding twice in the 90 minutes and we tried to find the victory every time. I think this is our spirit. Usually United create a lot of chances here, and I don’t think we conceded a lot of chances. For us, for our confidence, our level in the competition and our way, I think we can think very positive.

What this game and performance brings into focus for me again is the need for defensive solidity as we conceded the 19th and 20th goals of our Premier League campaign so far. That’s a significant number, too many for a coach who is determined to make his team far more parsimonious, and obviously losing one of the key components of his defence is not going to help. We let in a lot of goals, currently offset for the most part by our attacking potency, but sooner or later we’re going to have to find a better balance as Emery continues to say publicly when talking about this area of his team. Perhaps the return of two experienced campaigners might help.

As I said earlier on though, it’s hard to argue too much with a point at United in these circumstances, but I think the way we conceded the goals added to the sense of frustration. Going away from home to a ground where we haven’t had a lot of joy in recent years and coming back with a point three days after the one of the most physically demanding games of the season has be considered a decent result. Once you dive into the game on a micro level it is easy to feel like we could, and maybe should, have taken more but in the wider context of our season as a whole I think this will be seen as a net positive.

We’ll wait and see how the injury situation develops – they’re especially unhelpful at this time of the year because of the amount of games we have to play, and I suspect we’ll see that reflected in team selections for the upcoming cup games in Europe and the Carabao Cup where we might have to consider the bigger picture despite it being a derby. Next up though, Emery has to think about Huddersfield on Saturday, the kind of game from which we expect to take all three points regardless of those who are missing.

Right, that’s it for this morning. I’ll be back tomorrow with more here, including an Arsecast.