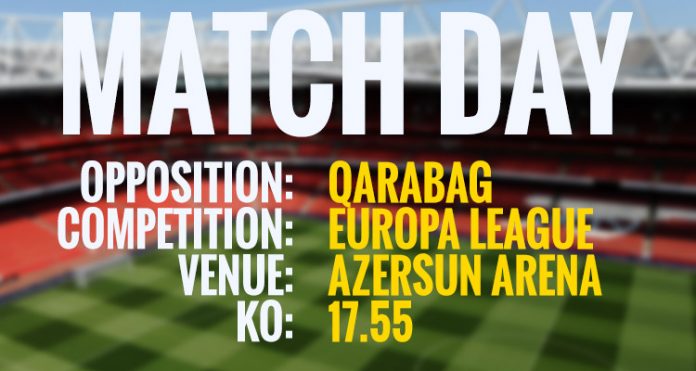 On the Arsecast Extra earlier this week, we discussed the potential team for tonight’s Europa League tie with Qarabag, I was of the opinion that Unai Emery would – because we play Fulham at noon on Sunday – rotate the bollix out of his squad, to use a technical term.

Yesterday, it became clear that while he might well rotate his team quite a bit, he’s bringing some heavyweights with him should they be required. The only two senior players who didn’t make the trip, beyond those injured, were Aaron Ramsey whose wife is pregnant and Pierre-Emerick Aubameyang who has been under the weather this week.

As ever, this has divided opinion a bit, and I can understand why. It is a long-ish trip, and we have a Premier League game early on Sunday, so giving some players a rest to keep them fresh for that makes sense. On the other hand though, I wonder if we’ve become too concerned with things like that, inured to the idea that we simply must treat the group stages of this competition as a kind of training exercise, and scared of the idea that players will get injured so we can’t risk them in games considered less important than domestic encounters.

Tonight, Emery creeps into double figures when it comes to the amount of games he’s managed for the club. It’s his just his 10th, and he’s still feeling out the players to an extent and, I’m sure, keen to keep the winning run going. So, while I think our XI tonight will be different from the one that lines up against Fulham, he’s got some insurance on the bench should he need it.

They’re not going with a budget airline either, so flight times are a minor consideration – even if travel itself is intrinsically tiring – and we’re talking about professional footballers here. Playing a number of games each week is literally their job, it’s what they train for, and if we were playing in the Champions League against stronger opposition but not quite as far away, we’d be using them for that game so, so be it. People wanted change, this is part of that change, and I’m inclined to get on board with it rather than drive myself crazy about something that might happen. Other clubs play strong teams in this competition and other cup competitions and do just fine.

It’s also worth looking at the Europa League fixture list: if we can qualify early then we can definitely send out ‘weaker’ teams for our last two games, one of which comes just after a difficult home game with Liverpool, and the final group game is away to Vorskla – an even more arduous journey than this week’s – and our following two games are the North London derby at home and then a trip to Old Trafford. Perhaps there’s some method to the perceived madness here.

Let’s also not forget that following Sunday’s encounter with Fulham, there’s an international break, so Emery will want to go into that off the back of two good results but also knows that for some of his players it’s two weeks without a game so he can squeeze them a bit ahead of it.

As I said though, I think there’ll be changes from the team which beat Watford on Saturday. He hasn’t yet decided between Bernd Leno and Emi Martinez who will play in goal, but we should see Stephan Lichtsteiner, Sead Kolasinac, Mohamed Elneny, Matteo Guendouzi, Danny Welbeck and Alex Iwobi all come into the starting XI, with maybe another change or two in there as well.

It will be a team with a Europa League flavour, but with ammunition on the bench if we should need it. The idea of Mesut Ozil, for example, coming on as a sub in group stage game in a land far, far away was almost unthinkable in the past, but Emery views things differently, and isn’t that what folks were clamouring for?

As for tonight’s opposition, I know very little about them. Their manager’s baiting of Arsenal and Henrikh Mkhitaryan’s decision not to travel to Baku really didn’t sit very well with me, so I hope we give them a sound thrashing to be perfectly honest. The ideal scenario is a comfortable win, a confidence boost, and a relatively incident free evening, but also this is Arsenal so I’m more or less prepared for any eventuality. The way we’ve been conceding chances to the opposition – something Tim touches on his column this week – remains a concern, and sooner or later some team is going to take advantage of that unless we tighten up.

The absence of Aubameyang and Ramsey tonight means that the front four is likely to have better balance than when both are selected, even if their replacements might be considered slightly inferior in terms of their individual quality. Whether that allows us greater control of the game, and thus negates some of the opposition attacking threat remains to be seen, but I hope it does. I’d also like to see a central defensive pairing of Holding and Sokratis to see if they can dovetail because if they do I’d stick with it for Fulham on Sunday.

Plenty for us to get our teeth into later on, and if you can’t see the game we’ll have a live blog for you as ever, plus all the post-match stuff over on Arseblog News. I’ll be back tomorrow with a recap, as well as an Arsecast, so until then have a good one.