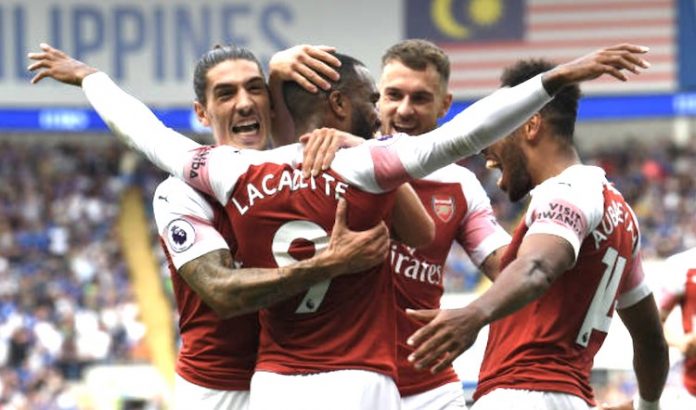 It’s two wins in a row now for Unai Emery’s Arsenal, and that simple fact is clearly a positive, but yesterday’s game was another illustration of how much work he has to do with this team and these players.

I won’t say Petr Cech’s early uneasiness with the ball at his feet set the tone, but when you’re pressed inside the first 60 seconds and you just about get away with it, it adds a sense of nervousness to proceedings. There was further evidence of that in the 8th minute when the keeper played the ball straight to Harry Arter who had a clear sight of goal but thankfully the Irish international blazed over.

On another day that would have seen us a goal down and despite the new boss saying he wants his keeper to keep playing it out from the back, if it causes those kind of issues on a regular basis he might need to rethink. He either changes the way he instructs his team, or he finds a keeper who can play that way. It really does make me wonder why £22.5m Bernd Leno – who almost everyone accepts is better with the ball at his feet – remains glued to the bench.

We got away with it though and went ahead through a thumping Shkodran Mustafi header from a Granit Xhaka corner in the 12th minute. The German was pretty dangerous in their box throughout the day, and defensively they looked all over the place at times. There was a desperation that we might have exploited more regularly. Monreal came close to doubling the lead, but at the other end they had their moments too with a double chance in one move, and an overhead kick that flew just over the bar.

Lacazette hit the post, we didn’t quite make enough of a couple of breaks, and then just before the break they were level. I could see the pass that Xhaka was trying to make, lifting it to Bellerin on the far side of the pitch and if it had come off it would have set the full back free down the right, but unfortunately he didn’t find his range. From there Cardiff still had work to do, they got a cross in from the left, we didn’t deal with it well enough in our box, and when the ball fell to Camarasa he lashed it home to equalise. On the balance of chances created, you couldn’t say they didn’t deserve it.

Half-time came and went without changes, and almost immediately more poor distribution from Cech put us on the back foot. You want to come out, start strongly and with assurance, but all of a sudden you’re scrambling again. It’s a worry. Mustafi almost scored before Ozil, who had a very quiet first half, stepped up his involvement. He started to find his passing range, and it was his ball into Lacazette that the Frenchman flicked to Aubameyang to pick up and curl home a beautiful shot to make it 2-1. Apparently it’s his first goal from outside the box in over 2 years, his last 76 have been from inside the area.

At this point, I was looking for us to take hold of the game, and really put it to Cardiff. Instead we sat off and allowed them back into it. It felt a bit like Wenger’s Arsenal to me, we saw that too often in the latter stages of his reign, and I wonder if that kind of reaction is hard-wired into the players – another thing Emery will have to iron out. The momentum we handed the home side saw them draw level from a free kick which was never a free kick, but had we controlled possession better – as we did for most of the rest of the game – I don’t think they’d have got that goal.

Torreira came on for Guendouzi and the Uruguayan had more impact than I had imagined. Given we had to try and win the game, I was expecting to see Mkhitaryan or Welbeck to add something to the attack, but as the game entered the last ten minutes the former Sampdoria man found Lacazette in the box, he received the ball on the half-turn and smashed a shot into the top of the net to win the game for us. It was a goal he thoroughly deserved on his first start of the season, and on the basis of this display, he deserves to keep his place in the side.

As ever, there were a couple of nervous moments between the goal and the final whistle, but we hung on to take three points as we head into the Interlull. That, of course, is a positive and there a few of those to take from the performance. Lacazette, as mentioned previously; Torreira’s impact should mean he’s pushing really hard for a place in the starting XI; our attacking prowess in general; Auba getting off the mark; and the quiet cynicism we showed in some of our tackling was a pleasure to see.

Hector Bellerin and Granit Xhaka picked up yellow cards for fouls on halfway which helped snuff out danger early, while Matteo Guendouzi pulled some fella down off the ball as Cardiff were building an attack and was booked when played stopped. I don’t know how many times I’ve said it, but making these kind of fouls is a necessary part of football these days, and while we can’t say for certain, it does look as if they’re part of an overall instruction rather than desperate individual interventions.

Once again though, the worry is how easy we are to create chances against. Arsenal had 15 attempts on goal with 72% possession, Cardiff had 14 attempts on goal with 28% possession. I think a better side with better players would have taken more of those chances, and right now we’re a team that is heavily reliant on our attackers to make up for our inability to keep a clean sheet.

It doesn’t help when your keeper gives everyone the heebie-jeebies in the first minute, nor when he presents gilt-edged chances to the opposition, but I think the problems go far deeper than that. I don’t think you could point to any one Arsenal player and say he was especially poor, or that he was the cause of all our defensive insecurity, it’s clearly an issue of organisation for the entire team. Again, it’s just four games into Emery’s management, but that we’re not really seeing signs of defensive improvement – particularly having just played the two worst teams in the league – is a bit concerning. .

The Spaniard has plenty of work to do during the Interlull and when we get the players back, because we can’t always rely on our strikers to bail us out as they did yesterday. He’s got to think carefully about the way he wants to play and make some decisions about which players are best suited for it. Whether that will see changes for our game against Newcastle in a couple of weeks time remains to be seen, but you’d hope as he gets to know his squad better, he’ll find a better balance.

James and I will be here later today with an Arsecast Extra but we’re not recording until after lunch so the podcast won’t be live until later this afternoon. Still, if you have any questions or topics for discussion, please send them to @gunnerblog and @arseblog on Twitter with the hashtag #arsecastextra.

Also, we have been having some issues with Arseblog News so the post-match coverage hasn’t fully gone out yet. We’re working on that this morning and fingers crossed we’ll get ratings, stats, match reaction and more out during the day. Sorry for the inconvenience and thanks for your patience.

Right, that’s that, have a good one and I’ll catch you later with the podcast.