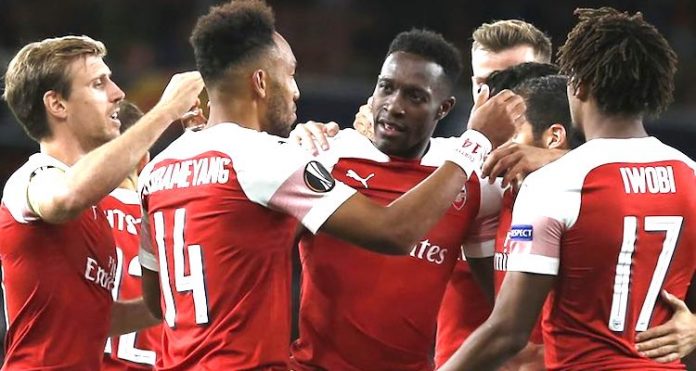 So our European campaign is off to a winning start with a 4-2 victory over FC Vorskla. I don’t think the scoreline really reflects our dominance, particularly in the second half, but it’s an illustration that there are still things that Unai Emery needs to work on with this group of players.

As expected Bernd Leno started in goal, but more interestingly Lucas Torreira was handed his first in midfield. I thought the Uruguayan looked impressive for the opening half an hour, but after picking up an ankle knock around that point – I think he landed awkwardly and may have twisted it a bit – he faded a little. However, up until then he’d shown qualities in that area of the pitch that you could see would be very useful week in, week out.

It wasn’t just his energy, it wasn’t just that he attempted to make a tackle with his head while lying on the ground, or his ability to give his central defenders and goalkeeper an easy out ball, but the range and ambition of his passing was pleasing to me. They didn’t all work, but he looks like he’s got the quality to find attacking runners from deep in midfield. Not all the passes came off, but I like that he sees those runs and tries to find them.

As you’d expect we dominated possession and territory, but didn’t really do a huge amount with it. That was until the 32nd minute when Mkhitaryan picked up the ball deep in our half (there’s some suggestion that he might have shouted ‘leave it’ at the Vorskla player – I have no idea but if he did I’m all for it), drove on, played Iwobi down the left and his ball found Aubameyang at the back post who finished to make it 1-0. A slick, quick, counter-attack gave us the lead in a game when we’d faced a packed, organised defence. Football eh?

It seemed to spark us into life: Torreira almost scored with a sneaky free kick around the wall, Auba hit the base of the post with a curling effort, and Mkhitaryan forced the keeper into a save before the break. We continued after the break and scored quickly through Danny Welbeck who headed home a Mkhitaryan cross after good work from the impressive Alex Iwobi.

Iwobi provided a good chance for Aubameyang who fired over, and as Emery was readying his changes, the striker got his second of the night. Having scored his first goal from outside the box in a long time in the win over Cardiff, he got another last night, curling home perfectly after he’d combined with Mkhitaryan and the ball had come back into his path off the legs of the defender. It was a fine finish, and also his last involvement as he and Torreira made way for Ozil and Guendouzi.

We saw another debut, Emile Smith Rowe replacing Iwobi on the 70′ mark, and just after that it was 4-0. Sokratis played a delicious chip over the top of the defence for Lichtsteiner, he put it to the back post and Ozil was there to poke it home with his studs. Lovely stuff, and with less than twenty minutes to go against opposition we were far superior to, this was now just about seeing out the game and ensuring we kept out first clean sheet of the season.

However, a mistake from Lichtsteiner allowed Chesnakov to slam the ball beyond Leno to make it 4-1 and as the game was in its very dying seconds they scored again. This time Sharpar was sharper than both Elneny and Guendouzi, firing home from the edge of the box to make it 4-2 with literally the last kick of the game. After the goal we let in in injury time against Newcastle last weekend, and then last night, it’s a lesson in concentration for these players. Both could be put down to late stage fatigue, but more properly it’s an illustration that even against more lowly opposition if you switch off you’ll get punished and in tighter games that could prove much more costly. You can’t say it’s a bad habit yet, but it’s something the boss has got to address before it becomes one, and speaking afterwards he was unhappy about the goals we conceded:

We want to be competitive for 90 minutes and I think the last 20 minutes, we conceded chances and we need to improve. Our disappointment today is that there were two goals conceded. But I am going to think that the first 60 minutes were very good and that we are going to continue impressing with those ideas.

It’s too easy, particularly after a win, to say ‘A win is a win, and let’s not worry too much about the other stuff’. There are times that works, but when you’re building something, when you’re at the nascent stages of developing a team and going through a process of educating players in your system, I don’t think you can ignore those failings. We’re six games in and we’ve conceded in every single one – it’s not a crippling issue as four wins in a row shows, but it’s something we need to work on for sure.

Still, there were more positives than negatives. Iwobi was excellent down the left, I thought the centre halves were both good – Holding was calm, assured in possession and read the game well, while Sokratis was more eye-catching, putting in some excellent tackles and playing his part in the build-up to the third goal. Torreira’s first 30 minutes, Aubameyang’s two goals, another goal for Ozil, and a nice debut for Smith Rowe who showed flashes of his undoubted talent.

I don’t think we learned an awful lot about Leno other than he appears to be more comfortable with the ball at his feet – although he was not subjected to the same kind of pressing Cech has been, and when he was put under occasional pressure he got rid of it more quickly – at one point to a smattering of applause for making that decision.

So, like every game so far this season there’s good and bad, this time the former outweighed the latter by some distance, but whether it’s enough to spark more interest in the group stages of this tournament remains to be seen. It really does feel like the poor relation and the attendance showed that. The swathes of empty seats ought to be something the board take note of. It shows that it wasn’t just Wenger-fueled apathy that kept people away last season: it’s simply playing Europa League football. The optics of it aren’t great, and it highlights just how important it us for us to get back into the Champions League. That is something that will require some investment from the soon be 100% owners, so let’s hope they’re as keen to make that happen as we all are to see it.

Right, because of the timing of the game there’s no Arsecast yet today, but there will be one a bit later on, so stay tuned for that.