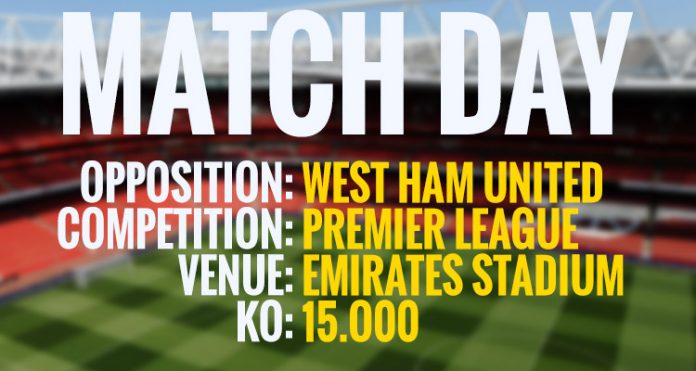 It’s West Ham today at the Emirates, a team who, like us, have suffered two defeats to start the season – also under a new manager. We’re above them in the table on goal difference, but both sides have a big 0 beside their name and that’s got to change today.

Unai Emery’s first two games have been well documented, and there’s generally been plenty of patience and understanding of the results based on the difficulties of said fixtures. Today is different though, this is a game in which there’s an expectation we can take three points, and failure to do so will not be met with the same measured response as the Chelsea and Man City games.

That’s not to say there’ll be banners and protests or anything like that, just that this is kinda like the start of our season again, and we need to get some points on the board. Considering the opposition and the calibre of players we have, it would be disappointing if we didn’t get the win today.

In terms of the team, as I said yesterday it’s hard to predict. On the basis of the last game, you could make a good case for Lucas Torreira to come in to replace Granit Xhaka in midfield, while if Emery has enough faith in Matteo Guendouzi to face City and Chelsea, that must surely apply to West Ham too.

Both Mesut Ozil and Aaron Ramsey have been sub-par in the first two games and it was interesting read the new boss suggest the Welshman should concentrate on football and ignore the ongoing and increasingly distracting saga of his contractual situation. He said:

Here’s the thing though, while it’s an issue for us, I can’t imagine Ramsey is going around London Colney pining for a new contract, not concentrating on his training drills, and waving a Bic biro around doing that *cough* thing when you want to draw someone’s attention to something they’ve forgotten. The bigger issue is where exactly does he fit into this team in the system that Emery wants to play, something you could say about Ozil too.

Personally, I think Ramsey has all the attributes to play as one of the midfield two, but it would require a discipline to his game that we haven’t seen since he was paired with Mikel Arteta during his best ever season. I don’t think it’s a coincidence that was the best he’s played for us either, but it does mean he needs a more defensively minded partner – perhaps Torreira fits that bill, but it remains to be seen if Emery views him that way.

The third man in a midfield three would also suit him, but then I think it becomes a choice between Ramsey and Ozil. It’s hard to get both of them in the team. This is an absolute guess but I’ll have a pop at today’s starting XI: Cech, Bellerin, Mustafi, Sokratis, Monreal, Torreira, Guendouzi, Ramsey, Iwobi, Mkhitaryan, Aubameyang.

When you consider that would give you a bench including Ozil, Welbeck and Lacazette, there’s fire-power there should we need it. Of course Emery could surprise us, as he has done both weeks so far, and I wouldn’t be that shocked to see Xhaka get a start in a game that might suit his passing range, but once we come away with all three points at 5pm then I don’t really care who he picks to do the job once it gets done.

Update: I’ve just seen some suggestions on Twitter than Ozil will miss the game today due to illness. So, that removes one layer of complexity from Emery’s team selection if that is the case.

There are three former Gunners in the West Ham squad today too. We’ve heard all about Jack Wilshere this week, but Lucas Perez and Lukasz Fabianski all return to the Emirates. I wish them all well for this season, but not today chaps. They have spent a lot this summer, and they’ve got some dangerous players who you could easily see causing problems for a defence which has, it’s fair to say, been unconvincing in the opening two games. I hope we’re more parsimonious at the back in terms of the chances we allow the opposition.

You can’t take anything for granted in the Premier League, but you’d hope that all this hard work and working hard and more hard work and don’t forget the working hard because we’ve seen countless videos of that and the hard work will come to fruition today and we get a performance and a win.

As ever, you can join us for live blogging of the game. Check back for a post later on or bookmark our live blog page and updates will begin automatically. Afterwards, we’ll have a report, player ratings, stats and all the reaction over on Arseblog News.

I’ll leave you with yesterday’s Arsecast, featuring a fantastic chat with former Gunner Alan Smith, and I’ll catch you all later for the game.

West Ham preview: A bit more of the same?