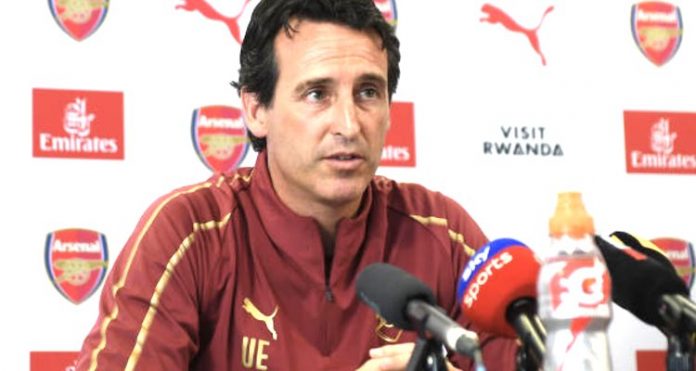 Yesterday saw a surprise Unai Emery press conference ahead of Saturday’s pre-season game against Boreham Wood. I guess it wasn’t a surprise for those members of the press alerted to it, but it’s unusual to have them before a game like this so early in the summer.

Nevertheless, it was interesting to watch – you can see it all here – not just for the bits and pieces of info we got from it (more on that anon), but how he conducted it. You can see/hear that his English has improved since his announcement when we heard him speak first, and on that day we saw his commitment to speaking the language when it might have been easier to use a translator.

Yesterday, he did have somebody with him to help him, but only to translate the questions put to him. I know I found comprehension of what people were saying far more difficult than speaking when I moved to Spain, and considering the range of accents, voices, the speed at which some people talk, there’s nothing wrong with having a translator with him. So, if Emery didn’t understand something, it was put to him in Spanish from his assistant, but he would then provide the answer in English. He’s obviously still got plenty to learn, but there’s no overnight way to master a new language. Immersing yourself in it is the best way, and he’s definitely doing that.

So, aside from his desire to speak, what else did we glean from this press conference? Well, he addressed the Aaron Ramsey contractual situation, but made it very clear that what happens has little or nothing to do with him. Beyond expressing to the IRS that he considers the Welshman an integral part of his squad, it’s out of his hands and up to them. On Ramsey the player he said:

I’m very happy with him. For me, every day, every training session, he has the ambition I want. He’s working with a quality, the type of ability that I want. I want to work with him.

And on the contract:

It’s a question for the player and for the club. In my opinion, I’ve said to Ivan, Raul and Sven that I think he’s an important player for me.

This is a change. Under Arsene Wenger we knew he was involved, to some extent or another, with the negotiations. Or, at least, had an input into the kind of offer made to a player. Here, we see the lines of demarcation. Unai Emery is the head coach; Ivan Gazidis, Raul Sanllehi, and Sven Mislintat, are the men who make those decisions now. Which is fair enough, and probably something we all understood anyway, but all the same it was interesting that the Spaniard provided that kind of clarity. The responsibility is not his, so it’s down to those men to make it happen.

As I said yesterday, I think there is something happening in relation to Ramsey and a new offer, and it remains to be seen if it’s sufficient to make him stay. It might also be a case that this is a take it or leave it offer, after which there’s unlikely to be much further negotiation. If it’s good enough, great. If not, then they have to make the decision about what to do and, realistically, the only sensible solution is to sell and reinvest, but with a truncated transfer window they don’t have much time on their side.

As for our transfer business so far, Emery said he was open to any new player who might make us better (sounds familiar, it’s almost as if that’s something any manager might say):

Or a big requirement, perhaps? After that, it was about who might be on the way out:

We are thinking about the young players, the possibility of them staying with us or going to play on loan at another team. We are also thinking about the players who were with us last year and whether we need them to stay with us.

You can look through the squad list on the official site and easily see at least four or five players who could be moved on to trim the squad down. There are five goalkeepers, for example, with Emery yet to decide who is going to be his first choice, and some fringe players who really, for their own sake as much as anything else, need to find somewhere else to play their football because what they can contribute to this squad doesn’t come close to what we need if we’re to make progress. That’s not be harsh either, just realistic about their quality in relation to our ambitions for the upcoming season.

So, I guess that’s where the main focus of our transfer business will be this month. We’ll see permanent deals for some, I hope, while loan deals for certain young players would go a long way to help them develop. I know we have Europa League and the League Cup in which some of them can play, but perhaps they’d be better served with regular football week in, week out, than occasional, sporadic appearances for a period of the season before they’re left behind at U23 level.

Emery will have some input into that of course, he admits he’s still getting to know his players, but he’ll be concentrating on what happens on the pitch, leaving the business side of things to the men in the suits (and Sven in his sack-cloth).

Right, I’ll leave you with a brand new Arsecast, chatting Arsenal, World Cup and lots more with Andrew Allen and Tim Stillman. All the links you need are below. For now, have a great Friday.