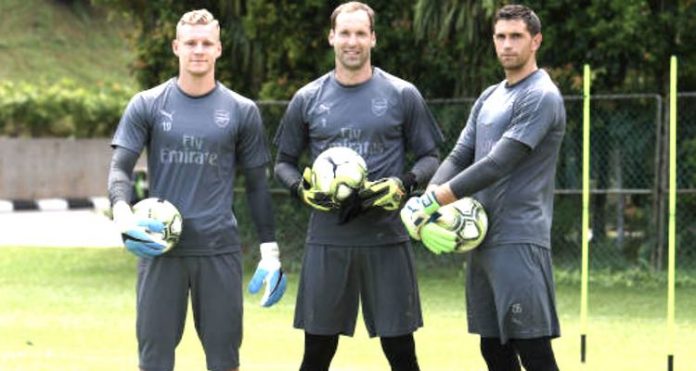 As Arsenal prepare to come to Dublin this week, I’m minded to think of the Phoenix Park. A wonderful city-centre amenity, acres and acres of beautiful parkland, and one its features are the herds of deer. Every so often, to help manage the population, a cull takes place and some of the deer are shot.

Something similar is going on at London Colney right now. If you go out on the pristine training pitches, manicured with scissors to ensure that the grass is the perfect length for us to play the kind of football we want to play, you can see footballers and coaches working throughout the day, but your eye will naturally be drawn to the vast flocks of goalkeepers.

These gentle be-gloved giants move together in beautiful synchronicity, yet they are skittish. Loud noises cans startle them and as one they turn and race for shelter, their mighty hooves thunder across the grasslands, and there they wait until they feel safe again to re-emerge and continue their diving and leaping and occasional grazing. Much like the deer in the Phoenix Park, they have no natural predators, and so their numbers grow and grow until they too require a good old fashioned culling.

Yesterday, that began with the departure of Matt Macey to Plymouth Argyle on loan for the duration of the 2018-19 season. The 23 year old made two first team appearances last season, one in the Europa League and one in the Carabao Cup, and last November was one of three young players to sign a new deal with the club.

It’s a move designed to give him some first team football and to see how he develops if he plays regularly. It’s a strange old job being a goalkeeper. 23 is not exactly young for an outfield player, but their lifespan, so to speak, is greater and they can play on well into their 30s so he does have time on his side.

Still, there is the danger of getting to a point in your career where you become defined as a back-up option rather than first choice. Look at Emi Martinez as an example. He’s clearly got some talent, and yet he’s almost 26 years old and he’s yet to make it to 40 first team games (and only 7 of them have been with Arsenal). He had a loan spell last season with La Liga side Getafe and made just 7 appearances.

Perhaps it was beneficial in terms of training and experience to be with another top flight club, but is there a point where it might be better to drop down a level and play every week? And if that’s the case, is it necessary to readjust your ambitions and decide that this is the level you need to be at for a while in order to get regular football – and with that you can then work your way back up the ladder? Or not.

Anyway, good luck to Matt Macey, but still the gigantic flock of keepers roams the prairies of Hertfordshire. We have Petr Cech, new signing Bernd Leno, another young keeper of 23 who just signed a new deal last week – Deyan Iliev – and, of course, David Ospina is due back at the club this week. I’m not sure if he has come back yet, but given that Colombia were knocked out of the World Cup at the same time as Switzerland and yesterday both Granit Xhaka and Stephan Lichtsteiner returned to training, you’d expect him to be on the same kind of schedule.

I had a look through the training pictures from yesterday and there were shots of the two Swiss lads, as well as new signing Lucas Torreira who has begun life at Arsenal, but none of Ospina. It’s not conclusive in any way because there weren’t any pictures of the keepers at all (perhaps they’d been startled and were sheltering in the trees at the far end of the complex), but either way, it’d be a big surprise if he were to survive the cull.

There’s talk of Turkey because there is always talk of Turkey and Ospina, and yesterday reports suggested that we’d accepted a loan offer for him and it was now down to the player to decide. Amazingly, he has another two years left on his contract, so we either gave him a 6 year deal when we signed him, or there was a surreptitious extension somewhere along the way. For the sake of all concerned though, I think he should go to be first choice somewhere in a league where necks and extendable arms aren’t quite as important as they are in the Premier League.

Then it’s the dog-fight for first choice between Cech and Leno. [Stag fight surely, ed]. My suspicion is that you don’t spend the amount of money we’ve spent on the German to make him sit on the bench, but of course much depends on Unai Emery and how he views the two players. Might he be tempted by the experience of Cech at the start of the season, particularly when you look at our opening two games and how tough they are, or will he go for the younger option to usher in a new era?

I also wonder if there might be pressure from outside on the new head coach when it comes to his team selections. We know the recruitment has been made externally to him, it’s not like it was when Wenger had the final say over who came in, so would it reflect badly on the men who did those deals if he were to overlook our record signing in this position and stick with the veteran? I know I’m skirting around the edges of a conspiracy theory here, but it’s an interesting thing to consider because all of these guys have to get on and have good relationships for this new structure to work properly.

Anyway, we don’t have long to wait to find out. It’s less than two weeks until our first Premier League game, and in the meantime we’ll see what he does in the games in Dublin tomorrow night and then Stockholm at the weekend.

A reminder to check out yesterday’s Arsecast Extra if you haven’t already, and we’ll have any breaking news on Arseblog News throughout the day.