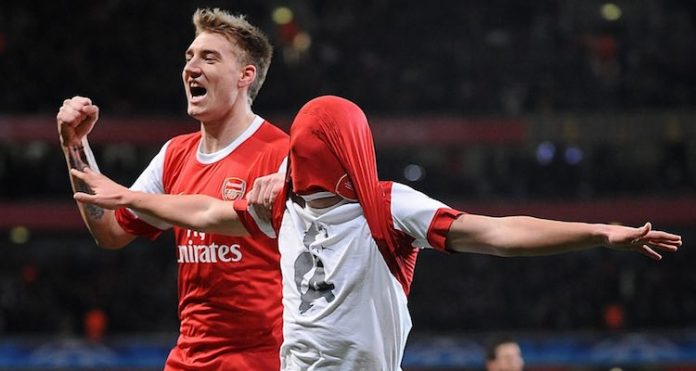 If you watched Liverpool absolutely dismantle Roma (two late goals aside which will make the Italians comeback in the second leg even more amazing than the one against Barcelona), it was hard not to be envious.

Not just of Mo Salah, the second best Egyptian called Mo in the Premier League, but of the occasion. There’s just something about big European nights … so it’s nice that we have one of our own to look forward to. Ok, it’s the Europa League and not the Champions League, but Arsenal v Atletico Madrid is the biggest game in our continental fixture list since facing Man Utd in 2009 and it’s one that everybody should be up for.

For me, the success of the team is the most important thing, but I heard and read people express concerns that Europa League success would mean Arsene Wenger stayed on. As much as I wanted things to change, there’s no way I’d put that situation ahead of winning a European trophy. It was 1994 the last time we enjoyed that, and we’ve lost three finals since, so the idea we could sacrifice this kind of opportunity – even if you try and make a case that it would be for the ‘greater good’ – was absurd to me.

Now, success or failure will have no bearing on the manager’s future. We know he’s going whatever happens, and I hope that it consolidates support for the team and creates the kind of atmosphere that can have a positive effect. That said, I think sometimes we overstate the importance of that. This is our home record this season in the Premier League this season:

Given that we’ve played before increasingly sparse attendances, and a crowd that haven’t always been easy to please, it shows that players can produce even when it isn’t in front of 60,000 on their feet throughout showing 100% support for 90 minutes. Yet it would be fantastic if what’s happened over the last week or so, plus the importance of the game itself, helps create something memorable inside the Emirates.

Wenger always talks about it being up to the team to perform in a way that gets the fans going, it can be a two-way street at times also. We haven’t had a truly big European night at the Emirates for a long time. The one that obviously springs to mind the Barcelona game in February 2011, when Arshavin scored that goal then ran away lifting up his shirt to reveal a t-shirt with himself on it, but as much fun as that was, it was a Round of 16 game – and one we ended up losing 3-1 in the return leg at the Camp Nou (in no small part to one of the most ludicrous red cards I’ve ever seen, but still).

This is different. It’s a semi-final and when you’re almost within touching distance of a final it creates its own excitement. Also, when your most memorable European night at the stadium is a Round of 16 win, then it’s fair to say there’s scope to add a little extra to that history tomorrow night.

Arsene Wenger will meet the press later today to give us his team news and all the rest, and I’ll have a full preview of the game tomorrow. In the meantime, if you want to to find out a bit more about tomorrow’s opposition, how Diego Simeone might approach the game, as well as some insight into Raul Sanllehi, as well as potential Wenger successor Luis Enrique, check out this bonus Arsecast with Dermot Corrigan.

Meanwhile, Hector Bellerin says he wants the number 2 shirt next season, which I think is a positive thing because he sees his future here with us, and given where else we need to make additions next season, holding on to our only actual right-back seems an important thing to me. We actually need to add a player in that position – whether it’s via the transfer market or the promotion of somebody from within to understudy the Spaniard – so hanging onto Hector is important.

It’s hard to list the order of priority exactly, but I think – at the very least – we need a central midfield player, a central defender, and a goalkeeper before we even consider anything else. That’ll be something for our new football executive team to sort out, I assume in conjunction with the new head coach who will want to have some kind of input into the players we bring in this summer.

Then there’s the issue of numbers. I’m not a arch-traditionalist, but I like the idea of my right back wearing 2, left back 3, and so on. At it stands, we don’t have number 1, 2, 3, or 5, and when Per Mertesacker retires this summer, that will free up the number 4 too. Perfect for that top class central midfielder we’re going to sign this summer. A keeper can have number 1, I don’t see anyone shifting to 3 from within the current squad, but a central defender should be all over that number 5.

Another interesting development might well be the availability of 10 if Jack Wilshere leaves – as seems likely right now. The stalemate and stand-off between him and the club is ongoing, and we all know how much Mesut Ozil craves the 10. I suspect if Wilshere departs, he’ll be all over that like a rash. Actually, better not say rash, he might get a rash, he’s very prone to illness.

There’s plenty of scope to get those important numbers filled, and when we make all the players wear black, unbranded boots, as well as shin-pads that feel like massive slices of industrial cardboard down your socks, we’ll be back to where we need to be.

All the news from Wenger’s presser will be over on Arseblog News throughout the morning, more from me here tomorrow.

Defensively strong Atletico favourites, but Arsenal have a real chance

Atletico Madrid is not an easy draw, but it’s an exciting one