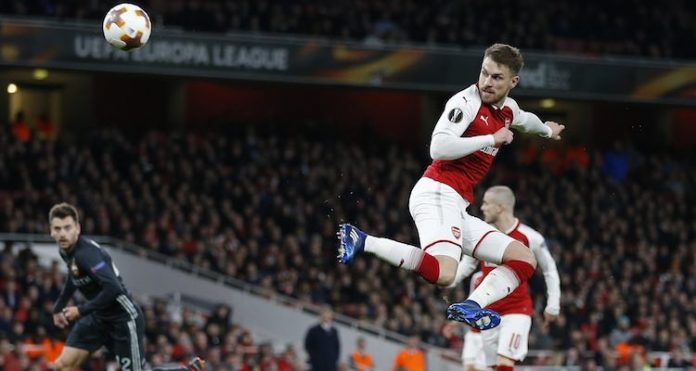 After the season we’ve had the last thing I’m going to do is complain about a 4-1 win in a European quarter-final, but two quick points before we delve into what was a very enjoyable night. One: we could and should have scored more. Two: defensively were a bit suspect, particularly in the first half, but at this point I think it’s just something we have to live with rather than get super-stressed about because it’s unlikely to change any time soon.

As I said though, I don’t want to take anything away from what we did. By any measure that kind of victory is impressive, and there was a lot to like about what we did – particularly in the attacking third of the pitch. When Mesut Ozil and Aaron Ramsey play as well as that, we should cherish it, and I think both Alexandre Lacazette and Henrikh Mkhitaryan contributed to what was perhaps our most fluid attacking performance in quite a while.

We’d had a goal disallowed – after a beautiful move – before we went ahead. This goal showed the benefit of actually giving Hector Bellerin players to combine with, as he was set free down the right by Ozil, his low cross came to Ramsey whose finish was controlled and perfectly placed to put us 1-0 up. Lovely.

The lead didn’t last though, and like a restaurant that is serving Michelin starred food, we can also dish up the worst kind of diner slop. Mustafi, for some reason, decided the best way to deal with a ball was to hook it over his head back into the danger area. Xhaka stuck a foot out to react, sent the ball high into the air, and Koscielny clumsily flattened some lad on the edge of the box to give them a free kick which was duly dispatched perfectly into the top corner. Not ideal given the importance of away goals, but it was about how we would react.

For the second time in a few days Mesut Ozil’s charge into the box brought about a penalty, this one much more a spot kick than the one against Stoke. As an aside, I know the rule has changed, but isn’t a foul on a player who is yards from goal worthy of some kind of card? If not red then surely a yellow? Anyway, Lacazette stepped up, scored and we were ahead again.

Then, the goal of the night and the Ozil Ramsey combo was perfect. Like cheese and ham, beer and nuts, Bergkamp and Wright. Lacazette held it up well, played it to Monreal who gave it to the German. He looked up, saw Ramsey pointing to where he wanted it, and gave it to him exactly there. The finish though, what can you say?

Is there another player in this team who would even think of that? Perhaps Giroud might have in the past, but it was audacious, impudent and all those kinds of words, but also inventive and technically perfect. Knowing the keeper was going to come off his line, he flicked it with the outside of his heel, leaving Akinfeev stranded. Wonder goal, stunner, whatever you want to call it, it was a little slice of football beauty and it highlighted how important Ramsey is to this midfield and how much we need to get his future sorted in our favour.

By the 34th minute we were 4-1 up, again Ozil was involved crossing from the left after he was set free down the left by Xhaka. He fizzed a ball into the box, Lacazette controlled it and finished inside the near post to give us a commanding lead to take into the second half and with hope we could extend it even further.

Unlike other games this season when we’ve had a considerable lead at the break, I didn’t think we took our foot off the gas in the same way. We had ten efforts on goal in the second period, and we also tightened up defensively, giving them much less space and time in our half.

How we didn’t score more I don’t know. Ramsey hit the post after being set up by Iwobi – who should have scored himself when sent through by Ozil, but I think his confidence is so low he dreaded a miss so tried to create for Lacazette who somehow skewed the chance at the back post. The Welshman had another couple of good chances to seal his hat-trick but couldn’t find the finish, and I don’t think the Russian side could have complained in the slightest if the victory had been by an even greater margin at the end.

I felt that it was a spectacular first half played at a high pace, but also an uncomfortable one for me because they looked dangerous as well. We played against a side who was technically very good, but we had scored some great goals in the first half and at half-time we were 4-1 up.

Then the target was not to concede any more and, if possible, add another one. We did the first part of the job in the second half but not the second part of the job. On the other hand, it will help us to completely focus in the second game by not thinking it’s job done. We know it’s not over. We have to go there with the right focus and try to win the game.

Taking a three goal lead into the second leg is a very healthy situation to be in, and while there’s a very small part of me that feels we should have put them well and truly out of sight last night, a 4-1 win is nothing to sniff at. Especially when it means they have to go for it if they want to salvage anything and the space that might give us to attack could prove their undoing.

As is typical of the Internet, I have woken to a Twitter timeline of killjoys and people who say it wasn’t all that, it was only CSKA and that the rest of the season is what we should be judged on. This terrible straw man that appears after every good result – as if people’s enjoyment of it blinds us to whatever else has happened this season – is tedious and, frankly, pathetic.

If you can’t get anything from a 4-1 win during which we scored one of the best goals of the season, then I don’t know what you’re hoping to get from football. If you’re seeking perfection, then you’re definitely not going to get it from Arsenal. We’ve had plenty to complain about this season, but last night was not one of those things. You can be aware of how poor we’ve been but still enjoy something when it’s there to enjoyed. The mute button is getting a pounding, let me tell you.

So, a good win, we’re in good shape for next week’s trip to Moscow, and now we’ll wait and see what kind of a team the manager picks for Sunday’s game against Southampton. I suspect we’ll see plenty of changes as Europe becomes ever more important, but for now I’ll leave it there and spend intermittent parts of the morning re-watching that Aaron Ramsey goal.

We will have a podcast for you today. James and I are recording a bit later this morning, so there’s an extra Arsecast Extra for, probably around lunchtime (maybe just the far side of it), but rest assured there’ll be something to listen to today.