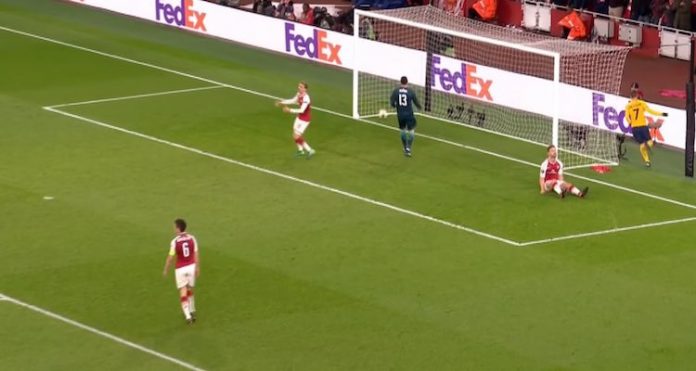 It would be a lie if I said I felt anything other than deflated and a bit gutted this morning. If you’d asked for fate to smile on you for a game as important as this, then the opposition having a player sent off inside 10 minutes would have been right up with there things going your way.

Despite his protestations, I don’t think Sime Vrsaljko could have any complaints. The first was a yellow, the second was even more of a yellow, and credit to the referee who dealt with the incidents on their merits and showed him a red card. The time of the fouls, or how early they came in the game, makes no difference: if it’s yellow it’s yellow, and off he went.

He was followed swiftly afterwards by an incandescent Diego Simeone who took exception to a minor foul by Hector Bellerin, and raged from the sideline to such an extent that he joined his right back and was sent to the stands. So, you’re now facing a team with 10 men whose manager is banished from the sideline, you’re at home, and you have a massive opportunity to put yourself in a great position going into the second leg.

And although we’d had a couple of good opportunities before the red card, Oblak making a great save from Lacazette after he’d hit one into the outside of the post, it was this period when I felt we really should have done more. They were rattled, no question, and it was there for us to turn the screw. In fairness, we made the chances, we just didn’t take them.

Welbeck shot straight at the keeper; Wilshere headed tamely into his arms; Koscielny hacked wide at the back post; and Monreal put one not far beyond the post with his right foot; but the goal wouldn’t come, and there was a warning sign or two when carelessness gave Antoine Griezmann a couple of sights of goal, one of which required David Ospina to make a good save.

Arsenal dominated possession and territory in the second half, but it felt like we were missing something, or someone, to give us that bit of extra penetration as we played the ball from side to side looking to pull them around to create space. Eventually though, the goal came: Ramsey fed Wilshere inside the box, he stood up a cross which Lacazette headed home wonderfully. It was a goal met with both joy and relief, because everyone knew how great an opportunity this was.

We continued to have most of the ball, as you’d imagine, but I thought they stayed well organised for the most part. Lacazette headed just wide, but beyond that I don’t think we created anything of note. If their legs were tired, it was a shame we didn’t bring anybody off the bench to add some freshness. I know our options were very limited, but Iwobi for Wilshere – for example – would have given us a player who has the potential to produce interesting combinations in the final third, and I think not making any kind of change was a mistake.

Then, disaster struck. Or Arsenal struck. Whatever way you want to look at it, we conceded a goal that we never should have let in. It began when Welbeck went to ground looking for a free kick that was never a free kick. Our Achilles heel in recent weeks has been long balls played in behind our defence, and so it was again – yet the situation we found ourselves in was hardly impossible to defend.

Our defensive line wasn’t right, Griezmann got between Koscielny and Mustafi, but the Arsenal captain got there first and should have dealt with it. Instead, he kicked the ball into his own face, putting his international teammate through. Also, watch Mustafi again, he assumes Koscielny will sort it out, with no sense that it might go wrong, so when it does he’s too far behind despite his late attempt to pick up the pace.

Ospina got something on it, it broke again for Griezmann and Mustafi’s attempts to make up the ground to put him where he should be in the first place saw him slip, and it was 1-1. An away goal for Atletico, and frankly it was as disastrous a piece of defending as you would ever fear on a big occasion, and it took the wind well and truly out of our sails.

Looking at the performance we had and the way the game went it was the worst possible result. It felt like an opportunity missed. We could already be qualified but it didn’t happen. Their goalkeeper made many saves and you could see that they have the quality up front to take advantage.

We knew if we did not score the second one it was important we did not concede.

How can you argue with that? It was calamitous to concede a goal to a team who haven’t conceded at home for 11 games now, and who have let in just four goals at the Wanda all season. Yes, you can take the positives from the chances we created, but let’s not overlook the fact we were playing against ten men for over 80 minutes.

And I truly think our performance has to be put in that context. I don’t have any doubts over the effort or application, but much like the Man Utd game earlier in the season when everyone spoke about how well we played, can you really be said to have played well when you fail to make the most of the chances you create? Dominating possession against a defensive team who are a man down is no less than you’d expect, but not turning that dominance into goals is a failure.

We had a fantastic opportunity to take a substantial lead to Madrid next week, and we blew it. We had a fantastic opportunity to ensure we kept a clean sheet and they didn’t get an away goal, and we blew that too. I can’t even begin to count the number of times I’ve written about our ability – if you want to call it that – to self-destruct. To shoot ourselves in the foot. And last night was another one to add to the list.

Now, on the flip side, 1-1 going into a second-leg means it’s far from over. There were signs that we can get at them, although it will be much more challenging when it’s 11 v 11, and while I’m not hugely confident we can do what’s required next week in Madrid, you have to retain some hope. There are goals in the team, hopefully Mkhitaryan is back to give us a bit more guile in the final third, and you just never know what we might produce.

However, in the cold light of this particular day, this was a real chance to put ourselves into a commanding position in the tie, and to go there with one foot in the final. However positive or negative you are this morning, it’s impossible not to look back on last night without some measure of regret, and unless we can pull off something a bit special next Thursday, I do fear this is a game we’ll look back on with dismay.

I hope we can go there and do ourselves justice, but right now I’m just a bit hollow because last night was an opportunity we missed in a big, big way.

James and I will have an extra Arsecast Extra for you this morning. As ever, if you have any questions or topics for discussion, please send to @gunnerblog and @arseblog with the hashtag #arsecastextra.

That will be available for you around lunchtime, until then.

Burnley 0-0 Arsenal: Another draw highlights the need for different personnel away from home