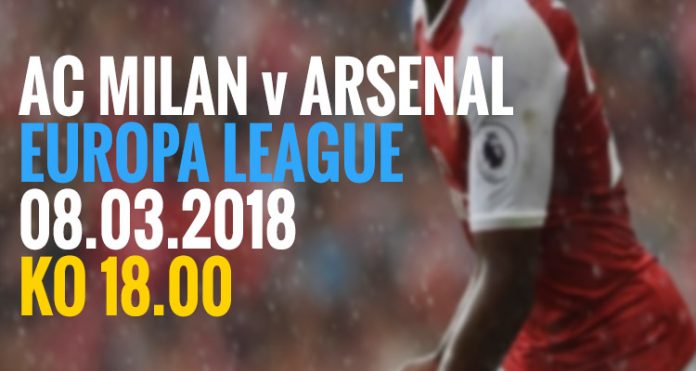 Arsenal face AC Milan at the San Siro tonight in the first leg of the Round of 16 in the Europa League, and quite frankly I have no idea what we’re going to get.

Recent form would suggest we’ll see an Arsenal side that plays poorly, looks like it’s lacking confidence and is defensively suspect while at the same time offensively weak. And yet I have to hope that these players can respond to at least put in a performance in the last competition that is meaningful for us this season.

As bad as things have been we all know they are capable of much, much better than we’ve seen in recent months, and if there is still some professional pride then it will have been badly stung by what’s happened. They say there’s nothing quite as dangerous as a wounded animal, but are we a hyena that will chew its own leg off to get out of a trap or a deeply depressed sloth that will just lie there and wither away?

The team news is that we’re without Hector Bellerin who has a worrying sounding problem with his knee, explained by Arsene Wenger:

He is injured – he has an inflammation of his left knee, without ligament damage. He had a scan yesterday, which was quite good. It showed inflammation. He tried to train today but he needs some further investigation. He was in hospital this afternoon to know why he is in so much pain. But it doesn’t look a long-term problem. He tried, he went out but couldn’t absorb the training session so we had to leave him behind.

It might be just me, but being in so much pain you have to go to hospital suggests there’s a problem that may not be as short-term as the manager is saying, but that’s something we’ll discover more about in the near future. Right now though, we have to replace him for tonight and I guess it will be Calum Chambers, as his deployment on Sunday against Brighton means he’s probably first deputy, but if we wanted we could use Ainsley Maitland-Niles.

If we’ve been prepared to play him at left-back, why not on his natural side? He’s also quicker than Chambers, has that recovery pace that Arsenal defenders really need, and at this point just anything different would be welcome. There’s no Nacho Monreal who remains sidelined with a back problem so Sead Kolasinac will continue on the left, and it’ll be Danny Welbeck up top in the absence of Pierre-Emerick Aubameyang and Alexandre Lacazette.

I was somewhat amazed to see that Danny hasn’t scored a European goal for us since that exciting hat-trick against Galatasaray in 2014, so to say he’s overdue is something of an understatement. I’m assuming he’ll be flanked by Mesut Ozil and Henrikh Mkhitaryan, so let’s hope there’s some measure of service to him, but equally I’d take classic Welbeckian toe-bog which hits of both his own ankles, then deflects of his shin, wrong-footing the goalkeeper as it trickles over the line like a drunk turtle.

In truth though, as I said above, I really have no idea how we’ll play or how we’ll try to play. A clean sheet away from home in European ties is often crucial, but defending hasn’t exactly been our strong-point in recent weeks, so I wonder if we’ll try to offset that by playing a bit more on the front foot. The issue with that is that attacking hasn’t exactly been our strong-point in recent weeks either, and we’re so often left exposed by our failures there it exacerbates our weakness at the back.

Arsene Wenger spoke about what Arsenal need to do to find some form again, saying:

Be practical, pragmatic – focus on what you can do better and analyse well what you didn’t do well and not be scared too much about the consequences of a bad result. Focus on defending better, playing quicker and doing more things together. Reachable targets to improve the team.

He might just as well have said ‘Win, not lose’, but we are where we are at this moment in time. With the return leg next week at the Emirates, I’d like to see us at least still be in the tie. It’s no fun watching us lose as often as we have been and it’s certainly no fun watching us play this poorly.

Winning a few games between now and the end of the season doesn’t alter what should happen in the wider scheme of things, and I’d be happy to get up tomorrow to write about an Arsenal performance that wasn’t as disheartening and disappointing as many have been this season. There is more quality to these players than we’ve been seeing, and maybe with all the focus of this current campaign now on Europe, we’ll get a response from them.

As ever we’ll have a live blog for you, and all the pre and post-match stuff on Arseblog News. Also, if you fancy something to listen to today, James and I did the first ever Arseblog and Gunnerblog phone-in show, exclusively for subscribers on Patreon.

It’s just €5 a month + VAT in in the EU to get access to the extra content and to help support what we do here on the site, you can sign up here.

Catch you later for the game, and hopefully we can do an Italian job on Milan tonight.