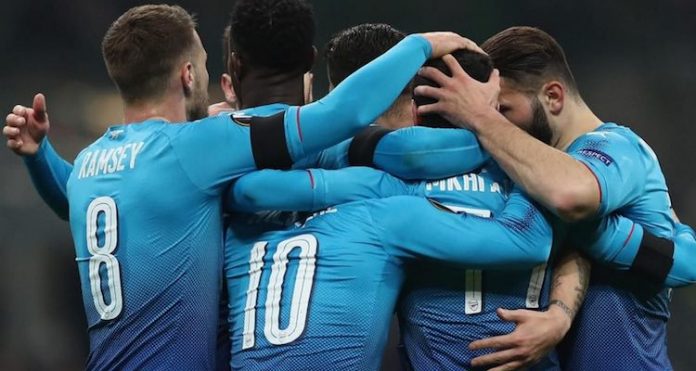 After four straight defeats, sitting down this morning to write about a win feels like having a delicious bacon sandwich having been fed coal dust and bit of bark for the best part of a month. Arsenal went to the San Siro last night with confidence low, form even lower and expectations locked away in the basement.

And here we are this morning in a great position going into the second leg after two away goals and a clean sheet. Football, for all we think we know, has this wonderful ability to surprise us and I don’t think there’s any doubt that we deserved to win. Sure, they had some sniffs at goal; that header wide in the first half when Ospina missed the ball, the lad belting it over from around the penalty spot, and that moment when they sent that other lad clean through and Ospina came out well to get the ball away, but there’s no need to focus on those this morning.

The fact is we could have had more, particularly in the first half when Henrikh Mkhitaryan had a series of chances. One of which saw him score his first goal for the club to put us ahead, but he shot into the side netting previous to that, and not long before half-time a lovely Arsenal move ended with him clipping his shot onto the bar.

Yes, you read that right: a lovely Arsenal move. If there was much to be pleased about in terms of our organisation and improved solidity at the back, the real bright spot of the evening was the fact we saw some attacking play that, if not quite the Arsenal of old, was certainly a step in the right direction.

There was some pace to our combination play, we discovered a weakness down their left hand side and tried to exploit it – Mkhitaryan in particular was very effective – and we appeared to be a group of players more or less on the same wavelength. After what we’ve seen in recent weeks that shouldn’t be underestimated as a real step forward.

A one goal lead going into the break would have been just fine, but in injury time we got a second. Ramsey’s flick inside to Welbeck saw the striker feed Ozil and although Milan switched off at the back, the quality of the Welshman’s run and the precision pass to find him was as lovely as the finish as he rounded the keeper to roll the ball home.

There’s a really excellent sequence of photographs on the Arsenal Instagram account which shows Welbeck’s full range of emotions as it unfolds in front of him – check it out here. So 2-0 at half-time was not a place I expected us to be, but you will not hear any complaints from me about it.

The second half was more perfunctory affair from our point of view. Milan huffed and puffed, and Arsenal defended well. Koscielny made a number of important blocks, Mustafi worked hard alongside him, and even when we lost the impressive Sead Kolasinac to injury, Ainsley Maitland-Niles slotted in without a fuss and didn’t leave us any weaker at the back.

By the end, Milan more or less ran out of ideas. A desperate effort on goal from Suso which went out for a throw summed things up. I think they looked at us, and they looked at the run they were on, and they thought it was going to be easy for them. Instead, they found an Arsenal team that was prepared to do the dirty work and which found a resilience that hasn’t been seen often enough lately.

My suspicion is that the Europa League, because it’s now the only thing that really matters this season, elicited that response. There’s the occasion, playing a big team in a famous stadium and all the rest, but the reality is any chance of success now rests on this competition and the players know that as much as anyone.

It may be a slightly harsh reality, and maybe Milan weren’t great on the night, but we’ve been fed scraps for weeks now, so to see us play that way and come back to England with a great result ahead of the second leg is really pleasing. It shows there’s something left in this team, and while it also raises the worry about how we’ll perform in the Premier League games which are essentially dead rubbers, maybe it’s the kickstart we need to find some form again in general.

I hope that’s the case, and I hope we see more of it on Sunday against Watford. Afterwards, Arsene Wenger said:

We have won again but we have not qualified. The result will lift the belief in the team again. When you lose three games in six days, it’s always very difficult. We want to keep our focus and finish the job next week. That’s what the target is.

The recent form should also act as a reminder ahead of the second leg. We should not forget that we were 3-0 up from the first game against Ostersund and let them right back into it, so there’s a warning there that this tie is not done and dusted by any means. However, I was expecting to be looking at things differently this morning, so there was plenty of enjoy about what we did last night and how we did it.

If we get more of the same next week, then we’re in a great position to qualify for the quarter-finals and when you get to that point of any cup competition you can start daydreaming about the final a bit, but there’s work still to be done. Let’s hope this performance and result is the tonic we need and we can press on from here.

For more on the game, check out today’s Arsecast in which I talk Milan and lots more to Paolo Bandini, before chatting with Kevin Whitcher of the Gooner – read what’s going on on their site if you’re a fan of the fanzines.