Morning all, as I’m sure you all know there’s no Arsenal this weekend because it’s FA Cup and we’re not in the FA Cup because we got beaten by Nottingham Forest in the third round.

We do have a cup final next weekend and a Europa League game on Thursday but unlike the Premier League I don’t really care about FA Cup games if we’re not in the competition. I have no idea who is playing who, and despite all the information in the world being readily available at my fingertips, I cannot be arsed to look that up this morning.

I was thinking a bit about penalties though, after David Ospina made a save from 12 yards against Östersunds FK on Thursday night. It sparked a lot of comment on Twitter from people who feel he should now be our number one keeper, and I wondered why that was. Is it because they think he’s genuinely the best goalkeeper at the club, or is it simply because he has actually saved a penalty and we tend to give a lot of them away so maybe it might help?

We all know Petr Cech’s record has been poor, you would expect a keeper to save at least one given how many he’s faced, but isn’t the big issue, you know, how many he’s faced? Shouldn’t that be thing we’re most concerned about, rather than castigating the keeper each time our clumsy defending costs us a goal?

Ok, this season we’re not top of the pops when it comes to giving them away, that crown belongs to Everton:

However, we are the only ones with 0% ‘defence rate’, i.e, it not going in, either by way of a save, or the taker getting it wrong. Still, it’s 6 penalties conceded in the league, and bear in mind that doesn’t take into account the ones we’ve given away in Europe (I think there have been a couple, I think, and there was one in the FA Cup game at Forest), which makes a lot of penalties.

I was curious then to see how this season’s stats stacked up to previous campaigns, and last season was, frankly, shocking. So much so I’m not even sure I can believe it’s real, check this out: 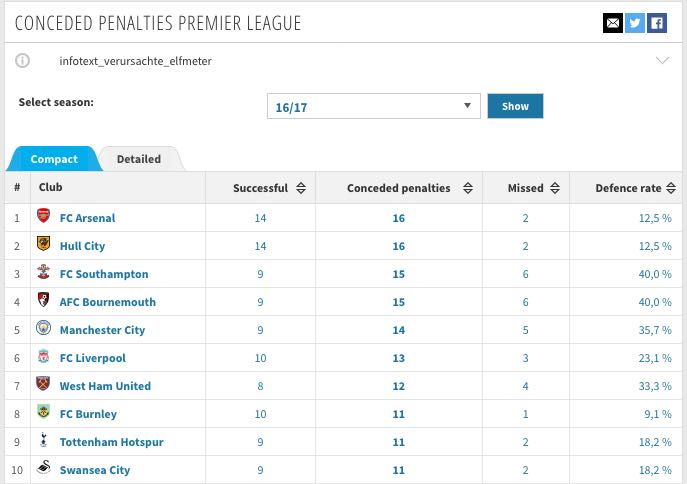 I’m pretty sure there must have been some in Europe and the cups (didn’t Bayern get one when Koscielny was sent off in one of the 5-1s?), but that is an astonishing amount of penalties to concede in one season. As with anything, when there are that many of something, some of them are bound to be contentious, bad decisions by officials perhaps, but I don’t think we can put that number down to referees having it in for us or anything like it.

Only 10 penalties conceded last season in the Premier League. 11 in all competitions.

Just the 10 in the Premier League last season, but it’s still a lot and the general point stands.

My theory, such as it is, is that there’s almost always an element of desperation to our defending. We often have to resort to last-ditch attempts to win the ball in our box, and when you add to that the carelessness which pockmarks our play at times, it adds up to a very unhealthy statistic.

Maybe someone with a more statistical eye than me could go back through those games and see what kind of an influence the penalties had on games in terms of scoreline, and what we might have done without them, but on the face of it, it can’t have been anything other than really damaging.

So, is that why people want to see Ospina in goal now? Because we’ve come to accept that we are team that faces a lot of penalties and as such we should someone in there who can make the occasional save? Isn’t the more obvious solution to try and address the defensive problems which see so many spot-kicks awarded against us?

That aside, I think Arsenal would be very, very foolish if one of the key squad building jobs this summer wasn’t a new keeper. We’ve heard rumours of Jan Oblak, and also Timo Horn from Cologne (the first Sanllehi v Mislintat conflict of this new era?), but it’s an area that clearly needs improvement.

For now though, I’d stick with Cech over Ospina because I think he’s just a better player. His performance in the North London derby kept the scoreline respectable, and despite his mistake against Swansea a couple of weeks ago, I think he’s had a relatively solid season playing behind a defence and midfield that would make Lev Yashin weep.

In the meantime, I’d suggest that the focus on our keeper not saving penalties is somewhat misplaced when we ought to concentrate a bit more on not giving them away. If these stats are accurate, then it’s 22 penalties in the league alone since August 2016, which is an astonishingly bad record, whichever way you look at it.

It’s hard not to think that with better organisation, a bit more care in our half, and more concentration, we might be able to avoid situations which see us concede penalties quite as often. And who knows, maybe one day Petr Cech will stop one.

heh, I’ll leave you there for today. Don’t forget to check out yesterday’s Arsecast for some weekend listening, and I’ll have more tomorrow.