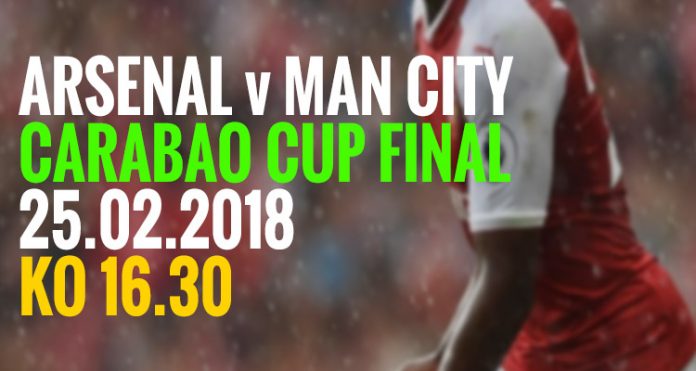 While we all understand the relative importance of this competition and where it stands in the pantheon of all the potential trophies on offer in a season, when you get to a final you want to win it. Whatever the other issues we have, and however things are going in the league, it’s a chance for an actual piece of silverware and that’s what football is about.

Does it mean I’ll be heartbroken if we lose? I guess it depends on how the game goes, and I won’t pretend this is the be all and end all, but it’s a final, it’s a trophy, and I want my team to win it.

The big question today is how the manager will set out his team. We’ve definitely shifted to a back four in recent weeks, but when you think back to our best performances in recent times against decent opposition, they’ve all come with a back three. The ones that stick in my mind are the FA Cup semi-final and final last season – against City and Chelsea – and the 2-0 win over Sp*rs at home this season.

On each occasion we looked solid and well organised, and I don’t think we’ve managed to display those qualities regularly with a back four, even against teams we’d be fully expected to beat. I know we thrashed Everton, but you know it was Everton, and City are a very different proposition.

The issue it creates is what to do in midfield because rather than the extra man in there we have it at the back. I think he could use Granit Xhaka and Mohamed Elneny today, and if Aaron Ramsey is fit he could be deployed further forward due to the absence of Henrikh Mkhitaryan who is cup-tied.

If he goes with is Ramsey/Xhaka partnership in the middle, then Danny Welbeck as part of that front three could also be an option as he’d add some physicality and pace down the left, particularly if he chooses Sead Kolasinac as the wing-back on that side. It’s hard to know exactly how we’re going to set up though, and I wouldn’t be that surprised if it was a conventional back four with Elneny playing that hybrid defensive midfielder role that sees him drop really deep when we don’t have the ball (which I suspect will be a lot of the time today).

In general, a lot of these players will come into the game really fresh having not played for a little while, which is good from the point of view of fatigue, but I often have concerns about us when we come in from the cold, so to speak. Too often we’ve found it hard to get into the rhythm of games after breaks, so rather than it being a benefit it’s a bit of a hindrance.

Nevertheless, the defenders (bar Bellerin), Xhaka, Ramsey, Ozil and Pierre-Emerick Aubameyang up front will all be relatively recharged, so hopefully that will stand us in good stead. I think the new man up front may well be an important part of how we play today. Assuming City have lots of the ball and we’re pressed back in our own half, using his pace and ability to get behind on a big pitch will be a way of relieving the pressure, as well as creating danger of our own if we can support him quickly enough.

Arsene Wenger admits we’re underdogs today, and it’s hard to argue with that really, but the manager cites last season’s FA Cup semi-final as a reason why we should believe we can do it. I do think that Man City and this Man City are, if not quite chalk and cheese, still very different animals.

This season they have been far and away the best team in England, they possess real talent in almost every area of the pitch, and can create danger from everywhere. We know all about the men in question, it’s whether or not we can do anything about them that’s the issue. Where they are relatively weak as at the back, but so much depends on whether or not we can exploit that often enough.

They’re not infallible or unbeatable as we’ve seen in recent weeks. I don’t believe there’s anything we can learn from the Wigan defeat as a way to triumph today, but it might just create a little uncertainty in their minds. Ultimately, it will be down to us. We know how flaky we’ve been this season, but we also know that on our day we’re capable of mixing it with the big boys and playing well.

Those days are a bit less frequent than we’d like, but hopefully today is one of them. If we click, if we don’t make the defensive mistakes that have littered this season, and if we can be efficient with the chances we do make, then you never know. It’s a cup final, anything can happen, so let’s keep fingers crossed it happens for us.

If you can’t see the game later, or if you just fancy following along anyway, we’ll have a live blog of the game, and all the post-match stuff on Arseblog News later.