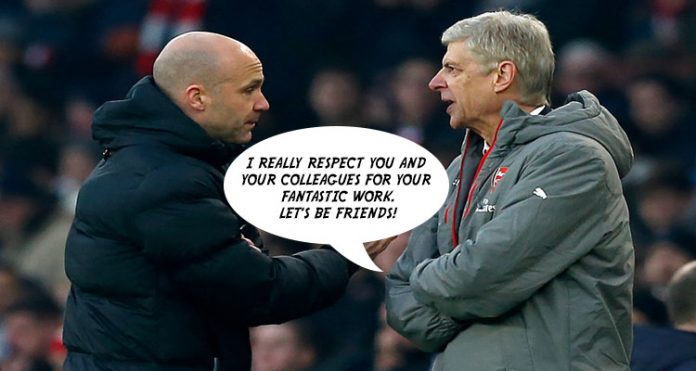 Arsenal are without Premier League football for a little while, but with two cup games in the next week, Arsene Wenger has some thinking to do about the teams he’ll select.

Next Wednesday we face Chelsea in the Carabao Cup semi-finals, and my suspicion is he’ll go with a side not too far from the ones he’s selected throughout this competition and the Europa League. The fact that it’s a semi-final might tempt him to add more depth to the bench than we’ve seen until now, but I can’t see him changing tack completely.

It means there’s probably more chance of a ‘strong’ squad for Sunday’s trip to the City Ground to face Nottingham Forest in the third round of the FA Cup. There will undoubtedly be some rotation, and players like Laurent Koscielny, Nacho Monreal, and Aaron Ramsey are unlikely to be risked given their importance for the remainder of the season, but that also means a bit more reliance on the men who are fit right now.

The manager will meet the press this morning to discuss Sunday’s game and his plans for it, and will undoubtedly be asked once more about referees. Yesterday, in news that can’t really come as any surprise, he’s been asked by the FA to clarify comments he made before and after the 2-2 draw with Chelsea on Wednesday night.

His suggestion that Mike Dean ‘sees what he wants to see’, has not gone down well, and speaking to Sky Sports after the penalty he declared ‘farcical’ from the Chelsea game, he said, “When opinions always go the same way it’s coincidence. Statistically, it’s built on the fact that when it’s repeated it’s not coincidence.”

On the one hand I understand his frustration completely. Fans feel the impact of bad decisions as much as anybody, and there’s no doubt that season we’ve been subject to some poor officiating. But that’s all it is, poor. It’s not a vast conspiracy to ensure Arsenal aren’t successful, designed to prevent us winning enough points to win the league.

One only need look at our defending, in as much as you can call it that, to understand that our main issues go way, way beyond referees. Regardless of what kind of dossier you might put together as ‘evidence’, it’s genuinely tinfoil hat stuff to think that we are being deliberately targetted by officials. It would be just as easy to create one which shows decisions that go in our favour, but that doesn’t fit the narrative at all.

The question is: what does Wenger mean when he says ‘When it’s repeated it’s not coincidence’?

He may well feel put upon at the moment, and perhaps there is part of him that sees Anthony Taylor – a man he’s had more than one run in with – and Mike Dean – who ludicrously sent him off at Old Trafford that time – and thinks they have it in for him.

I would like to think though, that as a man with vast experience in the game, and someone who often cares deeply about the wider issues of football, that he means it’s an issue with standards rather than any conspiracy. That is to say, it’s not a coincidence that poor decisions keep occurring because the standards of refereeing need to be improved. I hope that’s what it is, because that’s a discussion I think we can have without feeding this daft idea that referees are out to get us.

It’s probably something that should be clarified too, because by continuously talking about it in such a vague way, there’s a chance of it becoming self-perpetuating. If you constantly berate someone, or a group of people, even if they do their best to maintain impartiality and professionalism, there’s an increased likelihood of them feeling indisposed towards you. The effects of that may even be a subconscious dislike, but it’s not beyond the realms that it might affect decision making.

I mean, we’ve all seen it even in a match situation. If you have two teams playing a game and one team is in the ref’s face shouting and screaming and pointing about every decision he makes, and the other remains calm and polite, it will have an impact. At the moment, whether he’s justified or not, Wenger is the former and unless he provides real clarity then Arsenal might suffer because of it.

To be fair, he did mention it the other day, saying:

I think the system of promoting young referees does not work, and they do not give enough chances maybe to young referees to go up. They should have a bigger pool and the guys who have a bad patch go down to the second division.

Like anything else in football, there is a genuine discussion to be had about refereeing standards in order to improve them, and doing things which benefit the game as a whole. It can’t be simply about Arsenal being on the wrong end of decisions, even if that’s the issue we’re dealing with right now.

There may well also be a bit of Wenger taking his team out of the spotlight because of our indifferent form and obvious problems. Just two wins from the last eight in the league, only 11 points from our last 24 meaning we’re slipping away from the top four, and a team which looks as brittle as it ever has over the last few seasons. We’ve see it before from him, and other managers, that focusing on something controversial means you don’t have to answer difficult questions like ‘Why can’t you address the defence/midfield?’.

Still, it’ll be interesting to hear what he has to say, particularly with VAR in place for the Carabao Cup semi-finals, and let’s hope that this weekend provides us with talking points that have nothing to do with officials.

We’ll have all the press conference news and updates over on Arseblog News. For some extra reading here’s Tim Stillman on Theo Walcott, and I’ll leave you with today’s Arsecast, featuring chats about Chelsea, the Europa League and more with Dan Levy, and a look ahead to Forest on Sunday with Nick Miller. Get it into ya.