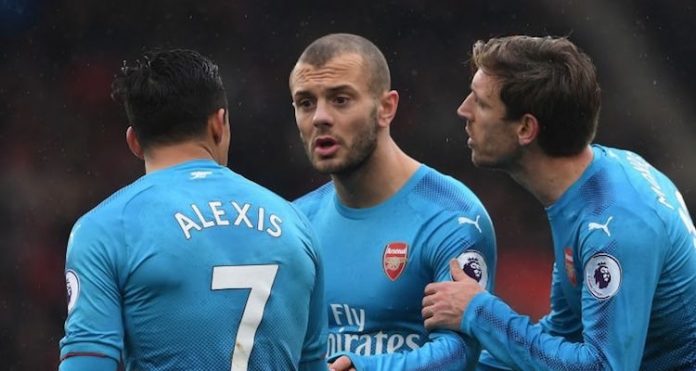 Having started so disastrously last weekend against Man Utd, you would have hoped that Arsenal would ensure that – at the very least – they didn’t make any early mistakes against Southampton, but within three minutes we were behind.

Per Mertesacker’s pass was intercepted, he then got caught the wrong side of the attacker, and when Charlie Austin was put through he finished well beyond Petr Cech. It might have been worse with the Arsenal defence at sixes and sevens for the first ten or fifteen minutes, and the home side had further chances.

Cech made a couple of good saves, but it felt as if we could concede at any time. We were sloppy and careless, traits which continued to manifest themselves throughout the game, but as the first half wore on we got on top – in terms of possession. Some years ago, Arsene Wenger coined the phrase ‘sterile domination’ after a game against Barcelona in which they controlled the game, had all of the ball, but didn’t turn that into shots on goal.

Arsenal had 67% possession yesterday at St Mary’s, and struggled all game to create anything of note. The only time we troubled Fraser Forster – a keeper we’ve made work much, much harder in the past – was a great first time effort from Aaron Ramsey in the first half which drew an excellent save, and a late Alexis Sanchez free kick that he made look a bit more showy than he needed to.

Having created so many chances in the previous two games, it could be seen as a solid defensive effort from the Saints, and while I think there was something to that, it’s also true that Arsenal’s performance was pretty insipid. There was no pace to our passing, no incision. Lots of the ball but nothing to show for it – the very essence of sterile domination, and once again we struggled away from home.

This is not a new thing. It’s not just some bad luck, it’s an ongoing problem that Arsene Wenger seems unwilling or unable to solve. Of the 18 Premier League games we’ve played in 2017 (the calendar year), we’ve won just six, drawn three and lost nine, conceding 32 goals in the process (via @Orbinho).

Yesterday we came within minutes of losing another one, and there was little that we did on the pitch that made you think a goal was coming. Jack Wilshere replaced Granit Xhaka and added a bit of drive, but not much. Danny Welbeck came on to hang around on the right wing and do almost nothing of note, and in the end it was that old reliable, Olivier Giroud, who rescued a point.

Having given the ball away constantly, Alexis finally found a delivery of reasonable quality, but for me the lion’s share of the credit goes to the Frenchman for what was a very deft header into the far corner to make it 1-1 with just a couple of minutes to go. You’d be hard pressed to say it was deserved in general play, but when you keep going and keep knocking on the door, you can’t argue too much if you get something eventually.

That said, there wasn’t much beyond the goal to get enthused about. There were some who thought the way we played against United – bar the goals we let in, of course – was a positive sign. All those chances we created, all those chances we created against BATE Borisov, and yet we reverted to type on the road once more where the only place you’ll find consistency is in our inconsistency.

Once again we shifted to a back four but it made little difference yesterday, and once more the centre of our midfield didn’t work anywhere near as well as it should. I think Granit Xhaka is really struggling for form, but at this point I can’t look beyond the fact we continue to deploy him in a system which does nothing to offset any of the weaknesses he has as a player.

We continue to play Alexis Sanchez for 90 minutes in spite of the fact he too is a long way off the boil. Having lost possession 34 times against United, he added another 32 concessions against Southampton. By any standards that’s remarkably poor, and yet it was his assist for the equaliser, and he created the best chance of the first half when setting up Ramsey for the shot which Forster saved.

The Alexis Tax is getting higher though, because not only are we not getting the goals and assists of last season from him, it’s clear that at times he blunts us and our attacking momentum with his decision making and insistence on getting involved at moments when he shouldn’t. But that’s kinda always been his thing, and the issue now is how much does it impact us in general.

While I understand frustration with him, I wonder if all the focus on him is a bit of a red herring. It doesn’t help, but I don’t think our toothlessness and our away record for the best part of 12 months can be put down to the fact he’s a bit more wasteful than he used to be. It surely goes far deeper than that, and in the end he helped make the goal.

We’re defensively nowhere near as solid as we should be, we often struggle to create, and we make far too many mistakes – particularly in our own half – which end up being punished as ruthlessly as you’d expect at the top level. Some will say it’s down to concentration and focus, perhaps it is, but if you make errors consistently it also speaks to the quality of your players, your system, your coaching, your motivation and all the other things that come under the purview of the manager.

Last season, Arsene Wenger changed his formation out of desperation during a horrendous run of form. It hasn’t quite been that bad this season, but he must surely be thinking about it again. It looks like we have big problems at the centre of our defence. Mertesacker, Koscielny and Monreal are 33, 32 and 31 respectively. The former is retiring at the end of the season, while Koscielny looks like a man who is struggling physically and whose legs are heavy.

We don’t have an obvious central defensive pairing, thus we stick with the three at the back and ask a midfield duo to carry the burden. Sometimes it works, sometimes it doesn’t, but it only adds to our inconsistency. Away from home it’s played 8, won 2, drawn 2, lost 4 and our goal difference is -4.

Given that we’ve got another away game on Wednesday, the sooner the manager figures out a way to correct our travelling woes the better. Does he need to bite the bullet and go back to the formation he prefers, with a back four? Does he need to show some faith in young players like Holding and Chambers? Does he need to shift his squad around and ensure that some of those currently in their comfort zones are given a reminder that they need to perform to play?

Probably all of those things, and more, but it wouldn’t be a huge surprise if he did more or less the same thing on Wednesday. He may have to deal without Aaron Ramsey who picked up a hamstring strain yesterday – lovely timing ahead of what is the busiest period of the season.

In the end a point was better than nothing, of course, but our worries away from home continue. In the context of the weekend, the fact Chelsea and Liverpool dropped points was a bonus in the battle for a top four spot. There’s no longer any point referencing the team at the top of the table, because that’s not something we’re good enough to be involved with.

James and I will be here later this morning with an Arsecast Extra. If you have any questions or topics for discussion please send to @gunnerblog and @arseblog with the hashtag #arsecastextra – we’ll have the podcast ready for you before lunchtime.