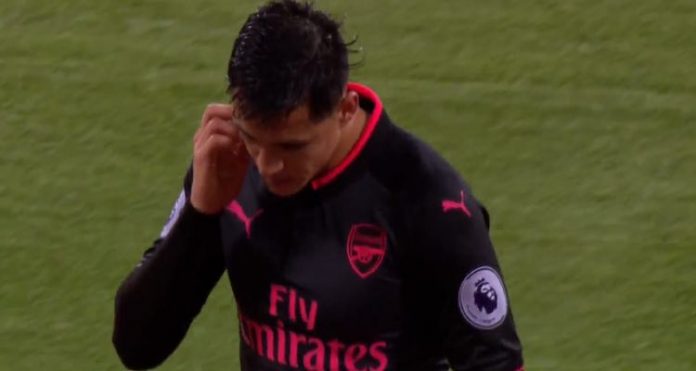 Hello everyone, welcome to Friday. I appear to have accidentally had more beers than I had planned to last night, so I’m feeling a little tender. I don’t know what happened. First I wasn’t in a bar, and then I was. And when I was, I stayed there and for some reason pints of delicious Scraggy Bay, Ireland’s best beer, kept appearing on the table in front of me.

It could have had something to do with me going to the bar and asking for them and then paying for them and so on, but this point remains unclear this morning. Still, here we are and there’s yourself, and we’d better get on with it.

Arsene Wenger meets the press this morning and hopefully there’ll be some good questions for him about how we’re playing and what he’s doing with his team. I was not at all surprised to see the return of the back four against West Ham, it was the make up of that back four that was a bit odd. There were other issues too:

What’s going on at left back, Arsene?

So, you have a Spanish international left back and Bosnian international left back that you just brought to the club in the summer, so why did you play a 20 year old defensive midfielder there against West Ham? Maybe Kolasinac was carrying a knock, and you thought that with Mustafi out Koscielny + Monreal was your best central defensive pairing, but it’s still a strange one.

No criticism of Ainsley Maitland-Niles, by the way, who acquitted himself very well, but it’d be good to see players playing in their best positions, because that’s generally the best place to play them.

What do the other centre-halves think?

So, you just gave Calum Chambers a new contract, a show of faith in him and a signal that you think he’s a player for the future – the future we have to start thinking about because of the age profile of our other centre-halves. If you think he’s good enough for a new deal, why isn’t he good enough to start a game against West Ham so you can play a left back in his natural position?

Also, where is Rob Holding? He played against BATE Borisov the other week, but hasn’t been seen since. Is he in the Upside Down?

He’s been, you know, pretty good since he arrived at the club and while there may be some logic to not playing him because you want to protect him and not send him down the same path as other young central defenders in the past, does marginalising him not also have a detrimental effect.

It was three in midfield against West Ham, and considering our issues in there that’s a good thing because it makes us stronger in a key area of the pitch. Is the balance right though? Can you play three left-footed players in there? Does Mesut Ozil operate as well as he can from there, even if he does have licence to play further forward and pull the strings?

The absence of Aaron Ramsey makes it a bit more complicated, and there’s more thinking to do there again for the Newcastle game. Having played his first 90 Premier League minutes of the season against West Ham, can Jack Wilshere do it again so soon? And does a home game mean you can afford to be a little more cavalier in approach?

A well organised Newcastle side under Rafa Benitez are likely to come to the Emirates and try to defend deep, having seen us struggle to break down both Southampton and West Ham. Don’t play into their hands by going with Olivier Giroud. A fine player, one I like, but one who is well known at this point, as is his impact on the way we play. We’re easier to defend against when he starts.

Alexandre Lacazette may have been feeling his groin midweek. Maybe he was just left on the bench because you thought Giroud was the best man for the job, or because of the press coverage over his desire to play, but if the record signing is fit for tomorrow, he’s got to start.

Can we afford the Alexis tax?

The Chilean was less wasteful during the week, but even when he is giving the ball away he tends to create a couple of good chances for his teammates. It’s frustrating, not least because it seems right now that our creative plan – such as it is – is to allow him to clip balls into the box repeatedly in the hope that one of them might come off.

It’s not very sophisticated, but it often works. The flip-side is how, particularly in the early stages of games when we haven’t pushed the opposition back, it affects our momentum. Against Southampton his first giveaway came after just 30 seconds. That’s not to say it set the tone for the opening stages of the game, that was a collective failure, but it was obvious all the same.

He’s out of form, but such is our inability to cope with moments of individual brilliance we probably have to keep playing him.

Anyway, we’ll have all the press conference coverage over on Arseblog News this morning. For some extra reading here’s Tim Stillman on Jack Wilshere, and today’s Arsecast is below – I chat to Rory Smith about our form, the manager, the backroom appointments and the life of the back-up goalkeeper.