You might have seen via Twitter that Anam (@ArsenalColumn) has retired from the Tactics Column. A big thanks to him for all his contributions down the years, but the show must go on, and we’re pleased that Lewis Ambrose will be taking up the mantle from this season onwards.

His first column is a look at Arsenal’s tactical approach for the new campaign.

A dreadful run last season forced Arsene Wenger’s hand and, after 20 years, he named an Arsenal team with three centre-backs. Drastic times do, after all, call for drastic measures. This wasn’t even part of a grander plan, merely a desperate last resort with a humiliating away defeat to Crystal Palace serving as the straw that broke (well, shattered) what was left of the camel’s back.

Rob Holding admitted as much, confirming after the Middlesbrough game that the players had tested the new formation just twice in training:

“We’d done it in the week and then we did it yesterday [Sunday] but I wasn’t in the team and I wasn’t sure if I was playing or not and it wasn’t until today that I found out I was in the back three,” said the defender, who benefitted greatly from the change.

There were shaky performances but, largely, Arsenal improved after a brief bedding-in period. Alexis Sanchez and Mesut Ozil carried a twin-threat, something lacking in previous months when the team had relied far too much on one of their star men at a time.

The big question for the new season, if we ignore the question marks surrounding the futures of Alexis and Ozil, was whether or not the shape that helped the side to last season’s late ‘success’ would be retained. Wenger had, after all, never seemed completely convinced by it.

“I feel overall it is not a long-term plan, but punctually it can work,” the boss said after beating Middlesbrough.

As Arsenal touched down in Australia a month ago, Wenger insisted a few things would be tested before the new campaign.

Wenger: "We’ll test many systems. At the start of the season we will certainly play with three (at the back)."

In pre-season, though, we only ever saw the back three. A back four was used just once – when Arsenal trailed Sevilla in the Emirates Cup – despite the squad being thin on defenders at various times. The biggest test this summer came, of course, against the champions at Wembley.

The ‘new’ formation, seemingly inspired by the success enjoyed by Chelsea and Tottenham last season, adds security Arsenal fans aren’t used to. Providing defensive compactness and a good shape to press without the ball, the team looks much more solid in defence.

Going forward, Arsenal have natural width without leaving themselves outnumbered at the back. The fluidity of the front three (and the roaming central midfielder) provides plenty of options on the ball without players leaving huge gaps behind them. It fits the players naturally and for Wenger, a coach who notoriously offers his players freedom, it does a lot of his job.

Granit Xhaka quite clearly isn’t the quickest but excelled spraying balls from in front of three defenders at Gladbach, as I wrote before the formation change. The fear, though, is that Arsenal would struggle without particular parts of the well-plied system – haven’t we seen that before? We won at Wembley without Koscielny, Alexis, Ozil but how would we do without Xhaka at the base of midfield?

One worrying aspect is the pressing, which is infinitely better when Welbeck is in the team. Without Welbeck, the ‘wider’ forwards remain far too wide and passive, stopping the wing-backs from pressing high or tightly marking their opponents. With our wide men pinned back, Arsenal get stuck in a back five and the central midfielders charge forwards, leaving huge gaps. 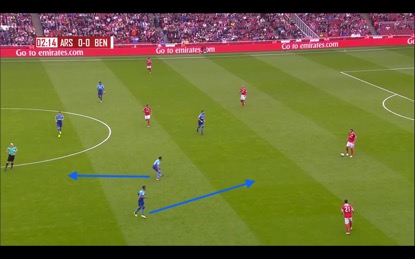 Here, in the Emirates Cup game against Benfica, Theo Walcott (bottom) could easily pressure the centre-back while blocking a pass to the left-back, who would be dually pressed by Walcott and Arsenal’s right-sided defender (Nelson) if he received the ball. Instead, Coquelin feels forced to advance and leaves a huge space for Xhaka to cover. Walcott’s positioning makes him pointless.

The same occurred repeatedly in that game, with Xhaka (circled below) pressing far too high; this isn’t a Coquelin-centric issue. 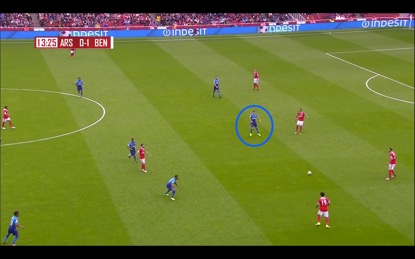 When Danny Welbeck plays, the front three becomes much tighter, forcing opponents wide where the wingbacks are higher and ready to pounce. 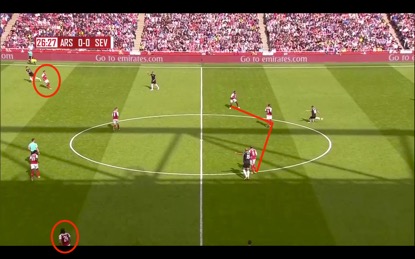 Arsenal block the centre of the pitch and a spare centre-back can join the midfielders when necessary. 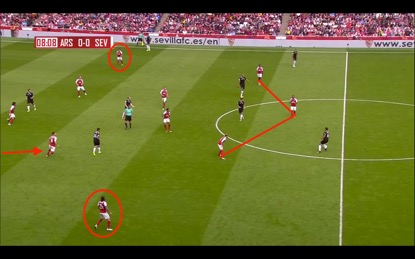 On the whole, the Gunners just look much more organised and compact when Welbeck is one of the wide forwards, as we also saw against Chelsea.

One excellent scene at Wembley had Arsenal push Fabregas and Kante back. Xhaka was tempted to follow the Spaniard but left him to Welbeck, allowing Arsenal to stay tight and force the ball wide.

Chelsea tried to move forward again and Elneny moved to press Kante as soon as he was passed to, forcing the ball back again safe in the knowledge the space behind couldn’t be exploited by his direct midfield rival – the central midfielders pressed loose balls but only when it didn’t leave a team-mate exposed.

This is how it’s done.

Alexandre Lacazette looked better at Wembley than the rest of pre-season and may just take a little while to get used to his team-mates and the way of playing. The formation should suit him in some ways: he’s unselfish and likes to link up with players around him, but he is more adept at making clever movements than he is at getting on the end of deliveries from wide, which could make things tricky.

This summer’s other new signing, Sead Kolasinac, is a perfect fit. I wrote about the Bosnian for Arseblog back in April just before the formation change but mentioned that Schalke often used a back three. Fans have already seen he can play sensibly at centre-back or help drive the team on from wide.

Whether or not Arsenal stick with this tactic throughout the season, though, remains to be seen. Unlike last year, teams can now expect it: they have the time to devise counter-plans and exploit weaknesses. The midfielders do still press too high and the current squad has nothing close to a natural replacement for Granit Xhaka, who is becoming increasingly crucial.

So, we enter the season with a few questions remaining:

The first three matches are perfect if we want to learn more: against Leicester last season the back three struggled and Wenger switched to four as we chased a win. The team uncharacteristically went north and blew Stoke away a few weeks later. Then comes a trip to Anfield, a place Arsenal find challenging, to face a team who play a style Arsenal constantly struggle with.

Come September, with three games gone, we will have a much better idea of where the team, the 3-4-2-1, and the boss truly stand.

Previous articleArsene Wenger press conference bingo*
Next articleThere is no conspiracy, Sanchez is injured + the problems of selling players