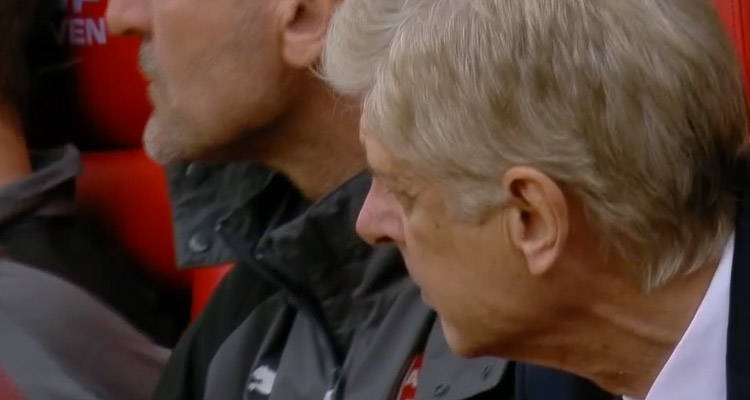 The Stoke result continues to loom large, with Arsene Wenger urging some calm after just the second game of the season. He says:

Let’s not go overboard. We lost one game. I can understand that but overall I believe there were a lot of positives in the game as well because we created many chances. We had great domination and unfortunately we dropped three points.

It’s true. It is only one game. We did have a lot of chances. We enjoyed ‘great domination’ and on another day, if we get that penalty in the first half for the foul on Hector Bellerin, and Alexandre Lacazette isn’t given offside then things could be very different.

Except we didn’t, and they’re not, and one game has illustrated the gossamer nature of the material that was used to paper over the cracks for some people. We’re 180 minutes into the new campaign and we’re already firefighting, dealing with Wenger Out hashtags, and I suppose it’s only a matter of time before we have more concerted efforts to highlight people’s unhappiness with the manager.

The Stoke game showed that, and I don’t know what anyone can do about it now. This is the Arsenal world that we live in, like it or not. A new manager, a different manager, would likely get a bit more patience after just 180 minutes of football, but watching the same man in charge as we lose so needlessly and carelessly to Stoke is going to push some people’s buttons.

It was worrying, let’s not beat around the bush. The individual mistakes were costly but we were supposed to learn from the ones of last weekend against Leicester; and while Arsene Wenger’s team selections have left us scratching our heads in the past, there’s usually some fundamental logic to them. The team he selected at Stoke, and the changes he made, were not easy to understand at all.

I say this with the caveat that he knows his players better than anyone else, he sees them training of course, and is aware of underlying fitness issues that we’re not privy to. Yet I can’t fathom the reasons for leaving Per Mertesacker on the bench. Stoke away is basically the perfect game for him, and the way that game played out was evidence of it. They had little to trouble us, the team would have been better balanced with Monreal and Kolasinac shifting over and one of Bellerin or Oxlade-Chamberlain on the right hand side.

Would Mertesacker’s presence have improved us from an attacking point of view? Probably not, but I think experience and leadership at the back might well have helped prevent the kind of carelessness that led to the goal. Then the substitutions, and Arsene Wenger explained his thinking with regards the introduction of Theo Walcott, saying:

I wanted to put Walcott on because he can cross for Giroud.

Quite why he thought this, I have no idea. Theo Walcott had two assists last season. One was at Burnley, when he nodded the ball across for Koscielny to the bundle it in with his hand; the other at Watford when Alexis Sanchez just about got the ball over the line after a cross from the right hand side. The last time Walcott assisted a Giroud goal was March 2016 in the FA Cup against Hull (4-0).

You have to go back to September 2013 to find Walcott’s last assist for Giroud in the Premier League, this was in a North London derby again Sp*rs at the Emirates. All that aside, we already had Oxlade-Chamberlain slinging in crosses from that side, and the sum total of Walcott’s contribution was three short passes in the 15 minutes or so that he was on the pitch. If you really wanted good balls into Giroud, you leave Xhaka on who provided two assists against Leicester because he’s involved in the game (even if it wasn’t his best performance and I can understand why the manager might have been frustrated by elements of it).

It felt like a substitution that was more about taking a player off than it was about introducing someone who could make an impact. And while Xhaka has got to smarten up when it comes to his passing, because his mistakes are being punished severely, he’s far more likely to create something than a player like Walcott whose main quality is his pace and ability to get behind a defence that is pushing up, not one that has parked the bus. As with team selection it felt like muddled thinking, and there’s no doubt in my mind it stifled the momentum we had in the final stages of the game.

Even the explanation over the wing-backs sounds strange, when asked about Bellerin being deployed on the left:

He can play there, I play him or Chamberlain there, and Chamberlain on the right looks good as well. Both of them are more right-sided players, I agree, and depending on the game I choose sometimes right and sometimes left.

Of course it is only the second game of the season, and there’s plenty of time to recover, but worries about the way we’re set up and the way we play are understandable too. With a trip to Anfield next weekend there’s a lot to work on between now and then. Based on what we’ve seen from both sides thus far, it seems likely this is a game that will be decided on firepower rather than defensive strength, but unless we find some balance at the back and some composure in midfield it’s going to be tougher than it should be.

Right, James and I will be here this morning with an Arsecast Extra, so if you have any topics for discussion or questions you’d like answered, send to @gunnerblog and @arseblog on Twitter with the hashtag #arsecastextra. We’ll have that for you around lunchtime.

Oh well, back in the team