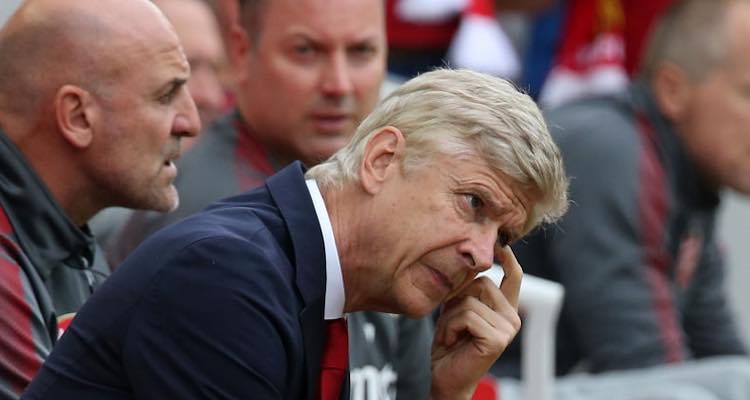 During last season’s abysmal run of form between the end of January and the end of March, it looked to me at times as if the manager had lost the dressing room. It’s a bit of an old chestnut, but when you saw some of the performances – both individual and collective – it was hard not to think it was true.

Then he changed to a back three, we lost just one game, and rounded off the season with a truly enjoyable FA Cup final performance, beating Chelsea. At which point, Arsene Wenger should have chosen not to renew his contract, and gone out on a genuine high. With a trophy under his belt, with more FA Cups than any other manager, there would have been an outpouring of goodwill and positivity, and his legacy – although somewhat diminished – would have remained more or less intact.

Now, three games into the new season, fans are singing ‘Wenger out’, there’s not a lot of goodwill, the Arsene Wenger who looked rejuvenated by the Wembley win in May now looks exhausted and beleaguered, and some of his players look like they couldn’t care less if they tried.

If people point to the 8-2 demolition at Old Trafford as the lowest point during Wenger’s reign, I think they need to reassess. It was horrible, but it was horrible with a makeshift team full of kids and players who were simply not good enough. That was a situation of our own making, of course, but in some ways it mitigates the scoreline a little.

Yesterday, was worse than Old Trafford for me. We were torn apart by a Liverpool side who ruthlessly and deliberately exposed our brittle underbelly. This wasn’t a team full of kids either. Bar Rob Holding, it was a team built with around £160m of mostly pre-lunacy transfer cash, with another £100m on the bench. It was a team in name only, because too many of them couldn’t even be bothered to do the basics.

Without wanting to give any of them a pass in any way, I do wonder if they’re as flummoxed as we are about team selections. Hector Bellerin on the left, Alex Oxlade-Chamberlain on the right being played days after he’s told the club he’s got no interest in signing a new deal and wants to leave (he played like it too), and our record signing striker, Alexandre Lacazette on the bench.

We brought in two players this summer, ostensibly to improve the team, but for the first big game of the season the manager leaves them on the bench. What does that say to them? What message does it transmit to the rest of the squad about them? Wenger insistence that Lacazette was still trying to adapt makes no real sense. How do you adapt without playing? You can also play well while adapting, and when you add it to last week’s terrible substitutions at Stoke when he took the striker and Sead Kolasinac off, it’s almost like managerial self-harm.

“We were not at the level requested for such a game – not physically, not technically, not mentally,” he said afterwards, as if this is somehow not precisely his job to make the players ready in all those ways. And it was obvious from very early on in the game that we were going to struggle. Only for a great save from Cech we’d have been behind sooner when Liverpool carved us open.

The first goal came from a Xhaka pass not finding his target, but to lay all the game on blame him for it is unfair. We should have defended the cross better, and for a player like Firmino to get between three centre-halves to head home is appalling defending.

The second was a fantastic counter-attack,  and all day long Liverpool knew they were at their most dangerous when we had the ball (luckily for us that didn’t happen that often). Saido Mane’s finish was superb. The third came from our corner, Bellerin caught out with a heavy touch and Salah’s run and finish put me in mind of the kind of goal we used to score when Wenger’s teams were at their best, and the fourth a brilliant cross but again abysmal defending.

It could have been more. Loads more. And all the while our somnambulant superheroes ambled about as if running, chasing, keeping-up, tackling, or trying were beneath them. If you saw it happening somewhere else you’d laugh because of how pathetic it was, and you’d come to the conclusion that things were very wrong at that football club.

If the last ten games of last season and the cup final win cast doubts in my mind about my belief in the manager and the dressing room, I’m in no doubt now. When you play like that just three games into the new season, there’s no other conclusion you can come to. Again, I’m not making any excuses for any of them, and I’d happily take loads of them out into the wilderness and drive off, but players are the first line and when you see them behave like that – individually and collectively – you know it’s not right behind the scenes. What they do on the pitch is the best barometer, and what we saw yesterday was shocking.

It hasn’t been right for a while, and if the FA Cup win provided something of a clean slate with which to begin the new season, that slate is now smeared with dirt, grime, and oozing juices from places you never want to ooze from. It’s a mess, on the pitch and off the pitch.

The power struggles of last season played out, with Stan backing his man, and Wenger continuing in a job he simply can’t walk away from. Quite what joy he gets from it anymore, I don’t really know, other than football is his life and he can’t envisage his life without football. It’s like a marriage of inconvenience.

We were promised last season would be a catalyst for change by a Chief Executive who said nothing at all for months, who refused to put his head above the parapet when things were going wrong. Some will tell you that at least Ivan Gazidis wanted change, wanted a new manager, but was overruled by Kroenke.

Maybe that is the case, but he’s still happy to sit there and take his £2m + bonuses, then give lengthy interviews to the official site and Sky Sports about what a great thing it was that Arsene was staying. He is focused on what’s best for Ivan Gazidis first and foremost.

Basically we have an owner making decisions that are best for him, a manager doing what’s best for him, a Chief Executive doing likewise, and players who are allowed do what they want when they want with almost no reprisal or accountability.

After the game Thierry Henry spoke of a culture of ‘comfort’ at the club, and it’s so true. From top to bottom that’s the case. Chief Executive makes a half-arsed powerplay against the manager? Nevermind, just stay around anyway. Manager has the backing of the one man who makes all the decisions, therefore lacks the ruthlessness required to make the kind of meaningful changes that were required to the team this summer. Kroenke remains untouchable with his 67% and quite clearly does not give a single shit about the success of the club. It’s so unhealthy.

In the aftermath of yesterday focus will turn to the transfer window, closing this Thursday night at 11pm, as a light on the horizon. Unfortunately, I don’t believe what’s wrong with this team and this club can be fixed by transfers. It goes way deeper than that. And even when we do spend or bring in new players, we don’t use them. Not that Lacazette or Kolasinac would have been the difference yesterday, but at least their selection would have been something of a nod towards doing things differently.

As it was, Arsene Wenger was willing to give players who have failed in big games like this time and time again another chance to fail. ‘Fail harder, my charges, fail harder!’ And fail they did, as did the manager, as did his coaching staff whose preparation for this game was clearly and obviously substandard.

And now what? Many of those players who coasted through the game yesterday will jet off on international duty. I was going to say they’d escape the awkwardness of the training ground the next day, but at a non-confrontational place like Arsenal there’d likely have been little said anyway.

We’ll do some transfer business this week but it’ll be market driven rather than strategic. Perhaps the result and performance at Anfield will see them make a high profile ‘keep the natives happy’ signing, but the fundamental issues and weaknesses that become more and more apparent at the club remain. As for what level of player we can attract at this point, your guess is as good as mine, but if you were a player looking at what’s going on at Arsenal right now you’d certainly have pause for thought, wouldn’t you?

So what’s our solution? I don’t know. Kroenke won’t fire Wenger, Wenger won’t walk away, and that’s basically that. There’s nobody else with the ability to change or influence things at the football club. The manager’s pride won’t allow him to give up – a trait that’s admirable in many ways, but sometimes great men need to be rescued from themselves – and the majority shareholder seems unlikely to do anything that might suggest his decision making was wrong.

It is possible for a manager to stay too long, even with the best of intentions, and Arsene Wenger has done just that. It’s stale, it’s predictable, we’ve been here before too many times, and nothing ever changes. We’re trapped in a cycle, doomed to repeat the same mistakes over and over again, with little variety other than trying to find new adjectives to describe it.

Yesterday was genuinely alarming and should be a watershed moment. It ought to be a wipe the slate clean moment, a get a brand new slate moment, and rebuild. It would be the right thing for the football club. But that won’t happen, the interests of individuals will take precedence over the interests of Arsenal, and we’ll probably have an ok season because that’s what we do, but I also wouldn’t be surprised if this was beyond us this time around.

There are shades of the end of the George Graham era. I know it was a different time, but after winning titles we became a cup team, unable to do it over long distance but capable in those knock-out games. This feels very familiar.

I have been thinking of a way to finish this post, a pithy ending, a piece of wisdom, a comment to keep the spirits up, but that’s beyond me this morning. It’s horrible to see Arsenal like this, but there’s no point beating around the bush or sugar-coating anything.

It’s a mess, and it could easily get worse before it gets better.

If you’re so inclined, James and I will be here later with an Arsecast Extra to pore over yesterday and all the rest. Comments or questions can be sent to us both on Twitter @arseblog and @gunnerblog, with the hashtag #arsecastextra, and we’ll make a post on the Facebook page too if that’s your bag.