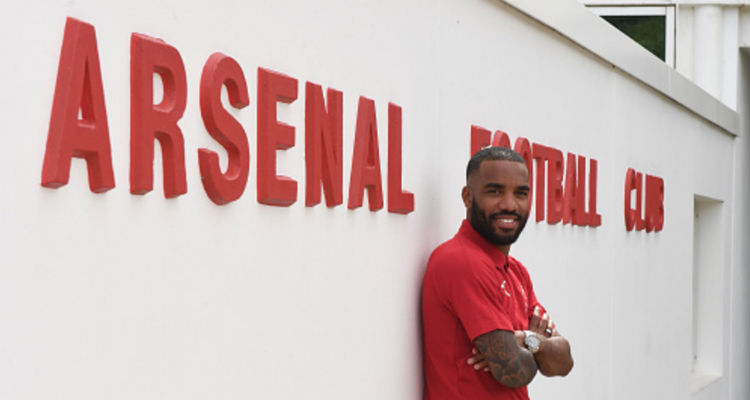 Morning all. With Tom out of action and Blogs posing for photos in Spanish supermarkets with Jamon Ruffles, you’re stuck with me. It’s my first appearance since last September so fingers crossed I don’t break down after 15 minutes like Mathieu Debuchy.

Right…as you might expect, given we’ve just broken our transfer record, most of the Arsenal headlines are still dominated by the arrival of Alexandre Lacazette. We’ve a while to wait before we get to see him in action, but in the meantime, I’ve been wondering what exactly we’re getting for our £46.5 million.

Spend 13 minutes watching all 129 goals he scored for Lyon and it becomes obvious that he’s very impressive inside the penalty box. Perhaps you heard already that only seven players in Europe’s big five leagues scored more goals than the 26-year-old did last season.

I’m well aware that YouTube videos have a canny knack for making everyone look efficient in front of goal (did you see those four goals Sanogo scored against Benfica?), however, it seems to stand true for our new boy.

Granted, the figures are a little skewed by the fact 10 of his 28 Ligue 1 goals last season were scored from the penalty spot, but even when you only look at the 18 scored from open play his chance conversion was 25% from 72 attempts. (Those are the figures Football.London uses although Sky Sports – going full football hipster with their ‘expected goals‘ analysis – has slightly different figures) Either way, it’s well above average.

In his first interview with the club, Lacazette noted:

“When I play I like to use my pace and to link up with my team-mates. As a forward, I like to score goals, of course, but that’s not all that I’m about. I love good flowing football where the whole team is engaged.

“Every time I take a shot at goal it’s because I believe I can score. I don’t just shoot for the sake of it. I always try to choose the best option, whether that is to pass or to shoot.

“I also try to keep as calm as possible. All that is achieved by a lot of hard work in training.”

If those aren’t words straight out of the Arsene Wenger playbook, I don’t know what are.

What else do we know? Well, since November 2014 he’s scored 23 out of 28 penalties so you’d imagine he’ll be asking for the ball if we win any spot-kicks next season. We only had six in the Premier League last term, up from one the year before, and we missed twice.

I’m not sure we’re necessarily getting an aerial threat – certainly not in the Giroud mould anyway – but, as this graphic shows, he’s sharp in and around the six-yard box and not bad when faced with a tight angle out wide.

Such goals appear to underline his poacher qualities, something Tom touched on briefly yesterday when he highlighted a comparison with Ian Wright made by Gerard Houllier. Speaking to talkSPORT the former France and Liverpool manager said:

“He is very mobile, very quick, good in short spaces, has good skill and he scores goals.

“He has good technique, is good at using short spaces and is a hard-working player. He can attack, he can defend quickly. I’m not surprised Arsene fancied him.

“He is a bit like Ian Wright really. You don’t seem to see him and then suddenly he moves.”

My gut instinct is that Wrighty had more flair and ingenuity, particularly outside the box. At first glance, Lacazette’s finishing appears clinical but utilitarian…more Anelka, more Wiltord.

That’s not a bad thing; I’m just not seeing a dink over Lukic at Leeds, the postage stamp 35-yarder at Swindon, Neville Southall in no man’s land in front of the North Bank, the goal that knocked out Auxerre. Wrighty always had an enthralling finish in him, but Wrighty was amazing.

Anyway, bottom line is, I’m excited by Lacazette. I suspect we’ll ease him into our pre-season preparations so he might get a few minutes in Australia before being more heavily involved against Bayern Munich and Chelsea in China.

I guess, once you’re done wondering whether the new boy will be any good, the next big question is whether he’ll be lining up next to Alexis Sanchez and Mesut Ozil. While I’m cautiously optimistic about the German signing a new deal, a report in yesterday’s Mirror claims the Chilean will only put pen-to-paper if he’s given £400,000 a week. Hmm…that doesn’t sound like we’re winning him over at all.

While you might be inclined to dismiss claims of Sanchez wanting £19 million a year as boardroom spin, it’s worth pointing out that Bayern Munich have already ruled themselves out of the running for the striker with president Uli Hoeness hinting the player’s €20 million (£17.6m) a year demands are too much. Yes, there’s a £1.4 million disparity in the figures but we’re talking mega bucks either way.

As I outlined in yesterday’s Arseblog News piece, we’re left with a real conundrum. Spend around £75 million in wages to keep him for four years, keep him for a year and lose him on a free, sell him and pocket £50 million that could at least be reinvested. That’s not a fun decision for Arsene and Ivan.

In other news a host of next season’s Premier League fixtures have been rescheduled, some because they’ve been selected for live broadcast in the UK and others because we’re in the Europa League. Spoiler – get used to Sunday afternoon football. While that will suit some of our global fanbase, it certainly won’t please my brother in Melbourne.

Right, that’s your lot for today. Arseblog News will have any breaking stories until Tom returns tomorrow. I’ll be back again on Monday.