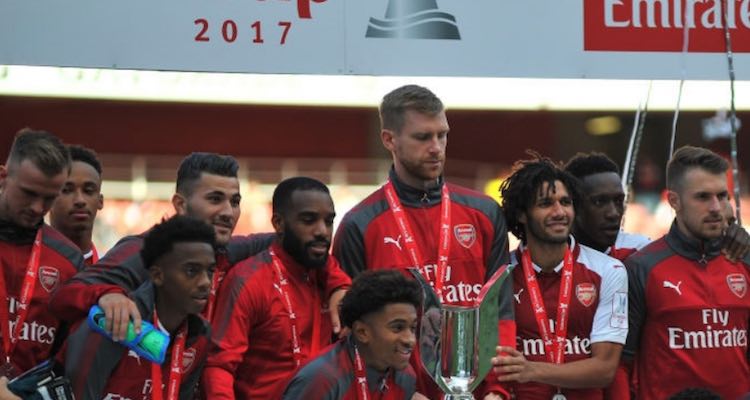 The Mighty Arsenal of London were yesterday crowned Supreme Champions Of Pre-Season with a glorious triumph in the not at all in any way rigged Emirates Cup at the Emirates Stadium yesterday. Although the impudent Spaniards of Sevilla won both their games of the tournament, the esteemed hosts were awarded the trophy by virtue of scoring more goals and having more players with nice hair than any other.

The celebrations on the streets of North London and around the world were raucous and unending as Arsene Wenger’s audacious football warriors added to the prestigious International Champions Cup they won with such sophistication and elan last week in China.

The resident carpenter is currently fashioning a cabinet of sufficient size and mahogany to house these impressive prizes and a public viewing will be arranged in due course.

You may now continue to revel in the associated glory until instructed to stop.

So that’s it. Pre-season is, basically, done. We have the Community Shield against Chelsea on Sunday, then the opening game of the Premier League against Leicester the following Friday. It’ll be November before we know it. Ahh, November. Can’t wait.

So, what did we learn yesterday or over the course of the weekend? Not a huge amount really. I think the manager viewed these games more as part of the physical preparation than anything in terms of tactics or formation. It looks like we’re sticking with the three at the back, it’s now deciding who plays left and right, in the middle, and up front.

I suspect we’ll get a better idea of that come Sunday. While it’s not a game to get overly invested in, the Community Shield should be a much better gauge of our readiness than the Emirates Cup or the tour games. I’d posit it’s not the kind of fixture in which you deploy Ainsley Maitland-Niles or Mohamed Elneny as a central defender.

We also learned that the relentless positivity of Arsene Wenger knows almost no bounds. After the game he was asked about the contractual situation of Mesut Ozil who, like Sanchez and Oxlade-Chamberlain, has less than a year left on his current deal (as do Jack Wilshere, Kieran Gibbs – linked with a move to Watford – and Carl Jenkinson).

For most people, having your two star players inside the final 12 months of their contracts would be a significant and understandable worry. Not so for the boss who claimed:

It’s an ideal situation, because everybody has to perform.

In some ways I have to admire his ability to at least attempt to make a silk purse from the sow’s ear that is the Arsenal contract situation at the moment, but I don’t really agree with him here. I can see what he’s trying to say, that if you want a new deal with us or you want to attract the attentions of a top club to join on a Bosman you have to play well, but the fact is players of their stature could amble through this season and still have enough cachet to get the kind of offers they want.

I’m not saying that’s what they’ll do, but there’s much less onus on them to maintain high standards than the manager seems to think. Where I do tend to agree with him is that these situations will become more prevalent in the future. He continued:

I think this is a fair point. In the cases of Sanchez and Ozil, their best tactic with Arsenal is to wait as long as possible because their negotiating power increases. Especially as, at 28, they’re about to sign the last big deal of their careers – beyond a move to a cash-rich but lower quality league in the final years. It’s understandable they’d wait, drag things out, and use the desperation of the club to extract the best possible deal.

On the other hand though, if they were convinced their football ambitions could be achieved with us, I suspect we might have found it easier to convince them to stay before now, and when you look at some of the other players in the last year of their deals, it’s hard to convince anyone the strategy has been coherent. It may well be a case that we simply don’t want to keep Wilshere and Gibbs etc, so it’s trying to find the balance between getting value for them in the market against the length of their contract.

For example, you don’t give Gibbs an extension, with a pay rise, just so you can get a higher transfer fee for him. It’s already difficult enough to sell players because of the disparity in wages between a ‘Champions League’ club (which we were for longer than anyone else), and a mid-table Premier League outfit. Look at the hassle we had getting rid of players like Bendtner and Squillaci not so long ago.

There was a point a few years ago, perhaps around the time of the van Persie departure, when we managed to tie down almost everyone to new deals. Now, we’re facing a more difficult scenario, and when it comes right down to it, I suspect some of the players in this situation don’t worry people that much. It’s more about Alexis and Ozil than it is anything else. Even Oxlade-Chamberlain divides opinion greatly, as he continues to rebuff offers (I did laugh at his agent leaking links to Chelsea and Stoke though!).

As we keep saying this summer, there’s a lot still to sort out one way or the other, and the longer these things drag on the more overbearing they become, so let’s hope we can start ticking off some of the boxes we need to as quickly as possible.

Right, that’s that. James and I will have an Arsecast Extra for you this morning, to discuss the weekend’s football, the manager’s comments and all the rest. If you have questions or topics for discussion, please send to us both on Twitter @gunnerblog and @arseblog with the hashtag #arsecastextra. We’ll have the podcast available around lunchtime.