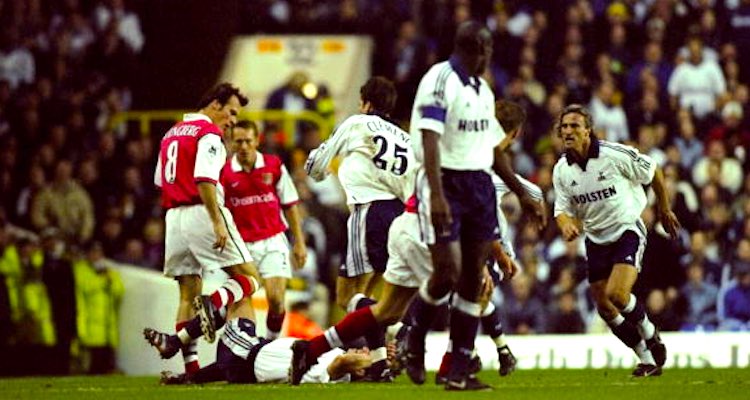 He kicked a door at White Hart Lane on Sunday, leaving stud marks on it.

Mesut Ozil kicked a door because he was asked to do a post-game dope test, mandatory and random, but he was crotchety because he’s been asked too many times to go for a wee in a cup after a game of football. It must be a chore, having to do a wee. Poor lad.

In fairness, after you have a game of football, wee does not always come easily. That’s why in the room where you have to wee there’s a fridge full of soft-drinks, water, beer, and other liquid which one can fill one’s bladder with, thus making it easier to wee.

That’s if you don’t have stage fright. The pressure to wee becomes too great, and you just can’t. Like at half-time during a football game and there’s a queue of bursting men behind you and you’re standing there and you’re going ‘Think watery thoughts … waterfall, tap running, bubbling brook, shower, leaking pipe …’

I don’t know how long it took Mesut Ozil to do a wee. Hopefully they had some champagne for him, that would be nice. His frustration, which led him to kick a door, might also have had something to do with Arsenal, and that we lost the derby 2-0 and it could have 4-0 or 5-0.

I noticed Ozil get a bit cheesed off towards the end of the game. I can’t remember which of their players it was, but we got a free kick on the touchline and he held onto the ball and Ozil was annoyed because he wanted to get the game going again. I’m not exactly sure why, perhaps he was anxious that we did more nothing as quickly as possible, but that little set-to, coupled with the win and asking him to wee in a cup must have sent him over the edge.

So he kicked a door with all his might.

In November 1999, during a tempestuous North London derby at White Hart Lane, Freddie Ljungberg was sent off for a scrap with Justin Edinburgh who took a tumble after Freddie pushed him. He stuck his fingers up at either the referee or their fans on the way off, went down the tunnel and absolutely kicked the ever loving shit out of the dressing room. He kicked its stupid wooden head in, doorwanker.

Arsenal lost that game 2-1, goals from Steffen Iversen and Tim ‘Timmy’ Sherwood were enough to keep us at bay, and we finished that game with 9 men because Martin Keown got sent off too.

Freddie Ljungberg joined Arsenal from Halmstads in 1998 for £3m.

Freddie Ljungberg was relatively unknown. Famously the story goes Arsene Wenger was watching England play Sweden on television on the 5th September of that year, saw a spiky midfielder give the likes of Scholes, Ince and Redknapp the runaround and thought ‘I’ll have me a bit of that’.

A week or so later he was an Arsenal player. On September 20th he came off the bench during a 3-0 win over Manchester United at Highbury, and scored with more or less his first touch, lobbing Peter Schmeichel from close range after he got on the end of a Stephen Hughes pass.

Under Arsene Wenger, Freddie Ljungerg, £3m Freddie Ljungberg, became a hugely effective, dynamic attacking midfield player. His energy, the timing of his runs, his character, his uncanny ability to pop up with a finish when needed, all made him a huge favourite.

Freddie Ljungberg made a huge contribution to the 2002 double, scoring vital league goals in the final stages of the season and, of course, curled in the goal that sealed the FA Cup at Cardiff. Freddie Ljungberg left John Terry on his arse.

Freddie Ljungberg arrived at Arsenal with little fanfare, but under Arsene Wenger developed into a fine player, and a hero for the fans. He became better, he became part of a team, he became a winner. Injuries saw his star diminish, but he came, he saw, he sometimes conquered, and he got better as a footballer.

Freddie Ljungberg hated losing, so he kicked a door at White Hart Lane.

Mesut Ozil kicked a door at White Hart Lane, perhaps because he hates losing but also because he didn’t want to go for a wee in a cup.

Mesut Ozil arrived at Arsenal in September 2013 and people literally danced in the street. Not simply because a previously stagnant Arsenal – a conservative, parsimonious Arsenal – had smashed their transfer record to bits, but because he was an established world class star coming from Real Madrid.

Mesut Ozil, German player of the year five years out of the last six, no longer makes people dance in the street. Mesut Ozil divides opinion. Mesut Ozil, at 28 and supposedly in the peak years of his career, no longer looks like a world class player.

Freddie came and got better, Mesut came and looks like a player in decline.

Freddie Ljungberg played in a team which had character and knew what it was they were supposed to be doing. Mesut Ozil plays in a team that can lose to anyone and looks like it has no clue what they should be at from one game to the next.

If you haven’t already had a chance to listen to yesterday’s Arsecast Extra, James and I discuss – at length – the North London derby, the performance, the prospect of selling Olivier Giroud, the manager, the scouting and lots more. It’s good therapy, I promise. Listen below.

Right, that’s that for today. Expect a quiet week as we go into post-defeat media lockdown, but I’ll be here as always tomorrow. Until then.