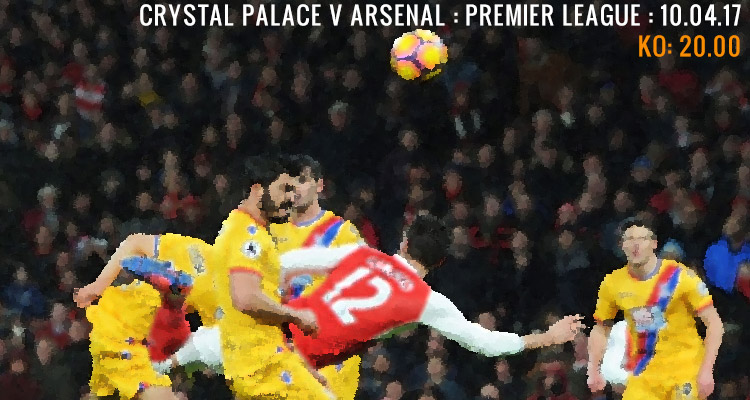 Nothing much went our way this weekend in terms of Premier League results – all the teams around us won their games, but ultimately all we can control is what we do tonight at Selhurst Park.

A draw with Man City and a 3-0 win over West Ham provided some green shoots of form but we have to make sure we keep that going against Crystal Palace. It’s been a relatively happy hunting ground for us in seasons past, but it’s generally been tough going and you’d expect that when we face a Sam Allardyce side it’s going to be a difficult.

Arsene Wenger has to decide how best to set up his side later on, but it’s hard to see him making too many changes from the team that beat the Hammers on Wednesday. Although he has Alex Oxlade-Chamberlain and Aaron Ramsey available again, I’d like to see him stick with Granit Xhaka and Mohamed Elneny in midfield. Firstly because they deserve to play after being part of our first Premier League win since February, and secondly we’ll get another viewing of their partnership from which we can assess its longer-term potential.

Olivier Giroud might feel he deserves a start having come off the bench and scored last week, so it remains to be seen if that tangible contribution puts him ahead of Danny Welbeck later on. Mesut Ozil, after a goal and an assist, will surely keep his place and with both Petr Cech and David Ospina out Emi Martinez will continue in goal.

We came out of a very difficult period and what we have shown is that we are united and focused and determined to do things right again. That was questioned for a while and I think we gave the right response. We have to show that focus now until the end of the season. There’s still a lot to fight for.

Let’s see what we get later on then. The previous game against Palace this season is memorable because of Olivier Giroud’s scorpion-kick goal, but I’d take a hippo-splat, a wombat-wiffle or a donkeycock goal once it meant we got the win.

The others have increased the pressure a little bit by getting the points on the board, now we have to show we can cope with that and react.

Meanwhile, Arsene Wenger has spoken about the future of Alex Oxlade-Chamberlain, saying it would cause ‘big damage’ if he were to leave the club:

I personally think it’s vital that Chamberlain stays at Arsenal. We bought him when he was very young and built him up. He has a great mentality and a good football brain and it would be big damage for us to lose this kind of player.

Which kind of begs the question why it is we haven’t offered him a new deal. You might remember a few weeks ago some stories – clearly planted by the Ox’s agent – suggested that the player was unhappy he hadn’t been offered new terms and that even if the club did so at this point he’d be inclined to turn them down.

It may well be part of the negotiating process, a way of putting some pressure on Arsenal to get things moving, but you can also understand how, if the manager keeps saying he wants to keep you but that desire is not coupled with a contract extension offer, why a player might not necessarily believe what’s being said. Or, indeed, why they might get frustrated by the situation.

Wenger has said countless times he wants to keep the Ox, but so far that has been that. There hasn’t, as far as we’re aware, been any approach to sign a new deal, and although there were some whispers last week that talks were about to begin with him, Jack Wilshere and others, as yet there’s been nothing concrete there. It’s just another situation at this club that makes you wonder what on earth is going on.

The manager then said it was important to keep other members of the so-called ‘British core’:

But do we? Kieran Gibbs has started 3 Premier League games this season. Doesn’t there come a time when a parting of the ways is the best thing for club and player? I like Aaron Ramsey but his continual fitness issues mean he’s a player who rarely finds anything like his best form, while Wilshere’s season on loan at Bournemouth has been good from a fitness point of view, but he’s hardly been pulling up trees when he has played.

Maybe we need to keep them to fulfil our home-grown quotient for next season, but in some cases I think we should be looking for upgrades rather than extending their contracts. If big changes are required for next season – as seems to be the conventional wisdom – allowing some of the players who have been part of previous under-achievements has got to be part of that.

Anyway, we’ll see what happens and I’m not necessarily convinced the manager is as keen to keep all of these players as he says. The summer will tell us more, depending on who’s gonna be manager, of course.

Right, not much else going on this morning. We’ll have a live blog and all the pre and post-match coverage over on Arseblog News, and because the game is tonight, James and I will have the Arsecast Extra for you tomorrow.

Catch you later for the match.